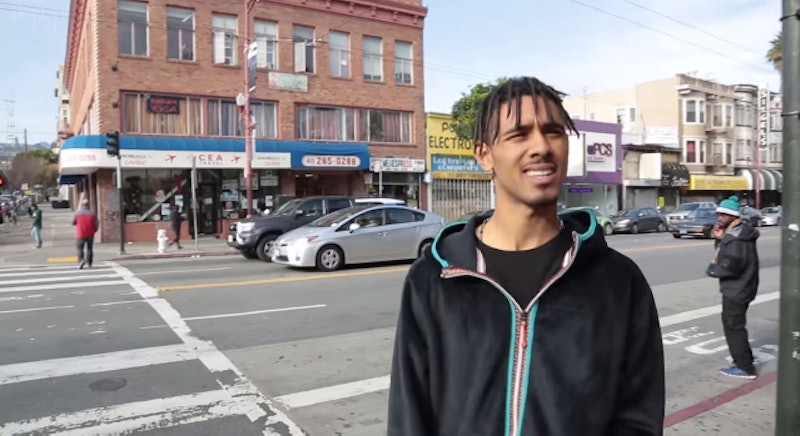 The video opens with a man named Kai standing at the back door of the apartment building he grew up in the Mission District of San Francisco. “My family was renting it for about $800,” he told Buzzfeed Yellow. “[It] got sold for about $1.3 million or something like that.” Kai and his family are just one of the stories of people evicted from Mission District, the historically Latino neighborhood where he’s lived most of his life. His story of the culture of the neighborhood during his youth and the recent changes that the neighborhood has experienced is the all too common one of gentrification.

Kai's family was evicted twice in California, thanks to the Ellis Act, a state law that allows landlords to evict tenants in order to “go out of business.” It's a law that's been used to displace working class families to make room for San Francisco's growing, and mostly white, tech industry.

As Kai provides a tour of the neighborhood, pointing out familiar culture landmarks and new stores that he doesn't recognizes, his statements sound similar to ones that were tweeted with the hashtag #ThingsGentrifiersDo earlier this month. The juxtaposition of a Dia De Los Muertos’s street art on the sidewalk and the luxury restaurants and apartments above it is the unfortunate reality of what can happen when culture draws people into a neighborhood: they begin to erase that culture.

Last year, Mission District residents gathered at city hall to protest the privatization of public parks after a video of an incident at the Mission Playground went viral. In the video, called “Mission Playground is Not for Sale,” Kai confronts a group of white tech employees (later identified as employees of Dropbox and Airbnb) who are trying to displace a group of neighborhood kids playing on a field. It's confrontation between native residents who are honoring the old pick-up rules of the court and the new residents who've purchased a permit that reserves the field. At one point Kai confronts one of the men and asks “How long have you been in the neighborhood?” to which another one of the men, off camera, responds “Who gives a shit, who cares about the neighborhood?” The video description includes an update that reads:

After public uproar, SF Rec & Park removed the policy that allowed this encounter to happen. The City - without posting the availability of the park rental on their public website - had been marketing the Tuesday and Thursday slots initially only through an app so that the demographic portrayed in the video - a tech league - was taking the space from neighborhood kids twice a week.