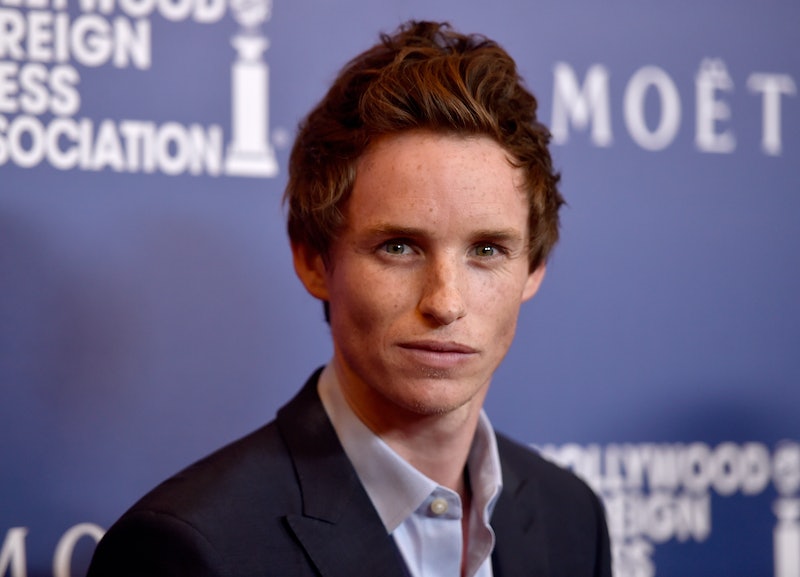 Get ready for some serious FOMO, everyone. Your fantasy best friend just interviewed your fantasy boyfriend, and the resulting conversation is nothing short of a golden exchange. Jennifer Lawrence interviewed Eddie Redmayne for the February issue of Interview magazine, and the pair discussed their craft, eating to much food, and their favorite reality shows. The beauty of this piece almost totally makes up for the time that David Blaine interviewed Madonna and made my eyes roll so far back in my head, I was sure they'd become permanently stuck.

In the exchange, the Theory of Everything actor reveals himself to be a perfect human being, meaning that he loves bolognese and the kind of brain-pickling "unscripted" programming that you live for, namely The Hills and The Real Housewives. Lawrence asks Redmayne about his TV watching habits just for kicks, to which he replies,

I don't talk about it. It's really been bad on this press tour. I come home from trying to pretend to know about astronomy and physics all day and turn on The Real Housewives.

Jennifer Lawrence's reaction is the only one that such an admission from Eddie Redmayne calls for:

LAWRENCE: Oh my God. REDMAYNE: I know. It's bad. LAWRENCE: You watch Real Housewives, Eddie? REDMAYNE: I've been a closet lover of faux-reality TV since The Hills. It's bad.

Saying "we're making a breakthrough," Lawrence then tells the story of that one time she went to PUMP, met Queen Lisa, and got a bottle of vodka autographed by the grande dame of Sexy Unique Restaurants. Then Eddie wonders aloud about how much is real/fake about these shows, to which J. Law's like ME TOO! God, the whole thing is amazing. Because I need this conversation to continue in perpetuity, let's imagine who Lawrence and Redmayne's favorite housewives are.

This one's a no-brainer. Lawrence has shown before that she's an unabashed disciple of Lisa Vanderpump. For instance, she made the PUMP pilgrimage and apparently became a total fangirl around Queen Lisa. But given that Lawrence is also into the sheer spectacle of the whole circus-like charade of reality TV, I'd guess that her runner-up lady would be Ramona Singer — the epitome of a Housewife powder keg.

While Redmayne probably has a special spot in his heart for Lisa Vanderpump (as a fellow British person), my best guess is that his favorite Housewife would be Carole Radziwill. She's high-minded and articulate like Redmayne, but appreciates the absurdity of the world around her. Also, I've got a hunch that he's endeared by the loopiness of Kim Richards.

Ah, Real Housewives. You can't have just one favorite.