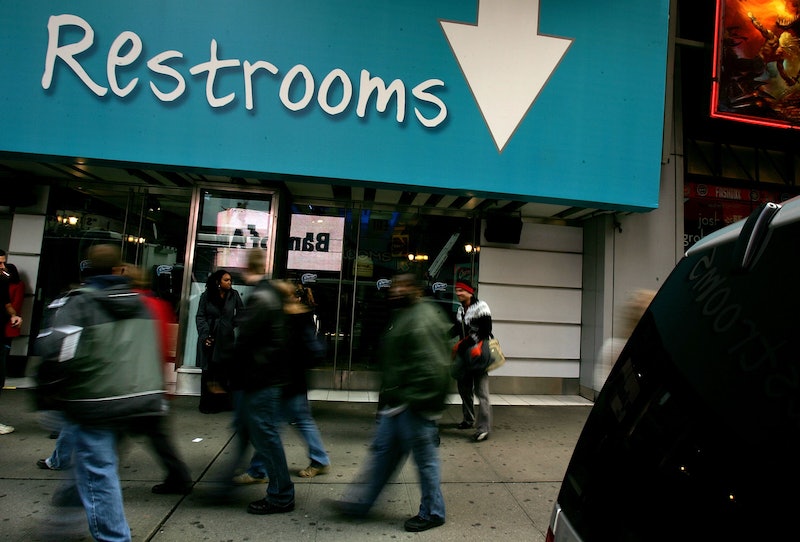 Public restroom situations can be stressful and downright dangerous for transgender and non-gender conforming people. To provide a safer public restroom environment for everyone, the city of West Hollywood is adding gender-neutral bathrooms by requiring that all public single-stall restrooms be converted to gender neutral. The law will go into effect this Thursday and will give businesses and public facilities 60 days to comply. Facilities must replace existing restroom signs on single-stall restrooms with one that indicates that they're gender neutral and make any changes necessary to make the restroom accessible to everybody. Proposed single-stall restrooms are also forbidden from being restricted to one gender, either by signage or restroom fixtures.

There are too many instances of transgender people being attacked in public restrooms, so this law is a welcome change. During the June meeting about this ordinance, West Hollywood Transgender Advisory Board member, Drian Juarez mentioned the 2010 attack of a transgender graduate student in a Cal State Long Beach restroom in which the assailant carved "It" into his chest. Just last March, a transgender teen was assaulted in a San Francisco public school restroom by fellow students.

According to The Oregonian newspaper, the 2014 assault took place after a California law gave transgender students the right to use any restroom facility of their choosing. That law helped to acknowledge the basic rights of transgender people, but failed to acknowledge that it is ignorant strangers that are most dangerous to non-gender conforming people.This new West Hollywood law shows a better understanding of the kind of dangers non-gender conforming people face in public. Hopefully it'll soon catch on across the country.

The new law also makes public restrooms more accessible to people with disabilities or attendants and people with children of a different gender. According to The LA Times, city officials pointed out that the is also beneficial to “the many people who have waited in line for a gender-specific restroom when a restroom for a gender for which they don’t identify remained empty."

More like this
How To Fight For Reproductive Rights, Based On How Much Time You Have
By Courtney Young
The Music Industry Continues To Fail Black Women
By Precious Adesina
Michigan’s Governor Is “Going To Fight Like Hell” To Protect Abortion Access
By Andrea Zelinski
Yomi Adegoke On The Offline Diaries & The Power Of Representation
By Jessica Morgan
Get Even More From Bustle — Sign Up For The Newsletter