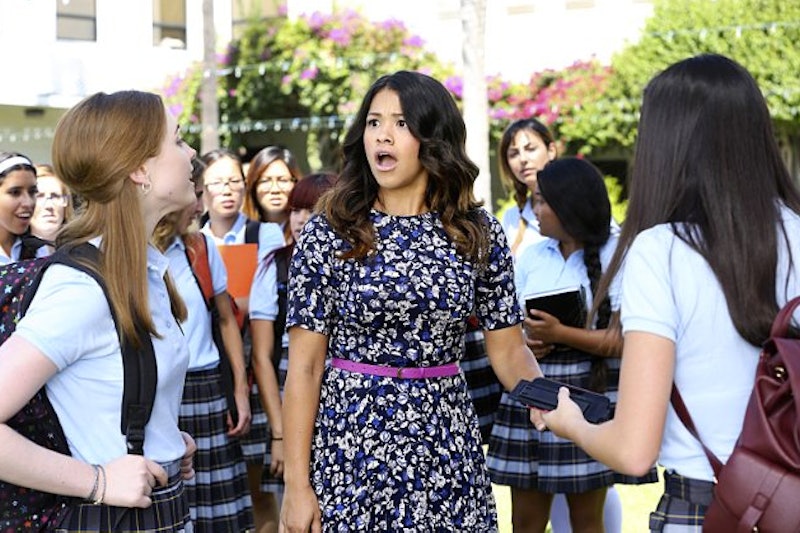 Look, Jane the Virgin is still new. Its star, Gina Rodriguez, has a really shiny and well-earned Golden Globe now, and the series is the subject of much hype now that nearly everyone's gotten over the "WTF?!" of the premise to see that in reality it's straight-up delightful warmth. Jane the Virgin 's impressed a lot of people in its first few months of public existence, and for good reason: It's navigated its telenovela CW waters with a deft understanding of its leading lady and its format. That's pretty tough to do for a series in its infancy. Now the tough part takes on new shape: Will the show be able to keep up its quality with the new eyes this awards season will undoubtedly draw in? Will it be able to live past this era of being this fall's most lovable new show?

Honestly, I have no idea. I'm not in that writer's room, I'm not on that set, and I've never had to steer a staff of hundreds of people into quality television. It could very well be that Jane the Virgin veers away from its own warmth and heart into hamminess and the bad part of soap opera as it moves to resolve the plot lines it's spent these past few months setting up. And so while we wait to see it unfold before us (the show airs its next episode Monday, Jan. 19), let's remember the moments of Jane the Virgin's first nine episodes that first indicated that this was a show that had the potential to go the long haul, as long as it stays willing to do so.

Jane Almost Has Sex With Michael

This is a show built around a woman devout enough in her religion and her relationship with her grandmother that she hasn't yet had sex despite being in her twenties and in a two-year relationship. The show assured us only three episodes in, though, of something that very much helped in the whole suspension-of-disbelief thing: Jane's hardly entirely pure of mind. In fact, of course she's horny as hell, and of course she and Michael had found ways to infuse sex into their relationship even within the bounds of Jane's promise to god and her abuela. And when Jane gets knocked up by a fumble of her gynecologist, of course she very strongly considers chucking out her rulebook and just going for the gold.

Jane didn't end up sleeping with Michael, so the devoutness remained in tact. But their main character also gained a layer, and a pretty relatable one.

Jane Finds Out Who Her Dad Is

Bless the existence of Rogelio De La Vega. Saying his name aloud is delightful all in itself, but so is the rest of him: Jane's such a grounded character that it's a joy to see her juggle her relatively uber-dramatic parents, especially in their unflagging adoration of their daughter. This is one of multiple story lines it was good to see the writers tackle a "reveal" of before it dragged on too long. Rogelio De La Vega will always bring the telenovela world with him.

Jane and Michael Break Up/She and Rafael Go For It

Something I wondered from episode one was how the writers were going to deal with the love triangle they set up between Jane, her fiance, and the guy whose baby she was having. I had my reservations, mostly acquired from years of botched love triangle story lines. But so far they've dealt with it better than I've been conditioned to expect, mostly because they seem to have made the decision not to drag along Michael for multiple seasons. The show explored Jane and Rafael's attraction to each other relatively swiftly, no doubt urged on by the fact that if this show waits there'll be a baby to deal with.

Best to lay the cards on the table now; if they're looking for drama down the line they've built Rafael into the very biology of the show's premise, so even if/when he and Jane go caput, there's always an excuse to keep him around. I'd wager she and Michael will find their way back to each other eventually, too, if they're looking to keep Brett Dier around past whenever they nab Sin Rostro.

Jane and Rafael Have A Romantic Night Together

These scenes — starting in a Target and ending in a night talking under the stars — proved that this show could write romance. It wasn't huge declarations, it was the simple joy of seeing your conversation gel so naturally with another person's. It's a connection that I hope this show remembers even after the **** hits the fan in these two's romantic relationship — as it inevitably will, because this is a TV show. This will definitely hit a bump if it turns out Rafael's Sin Rostro. But I guess we'll all just have to watch to see what Jane the Virgin does with its next steps.

Also worth noting: The strong base they've built with the women in Jane's family. And with such a strong main character, I feel like as long as the people running this show remember who Jane is and the kind of world she lives in, they'll be golden.