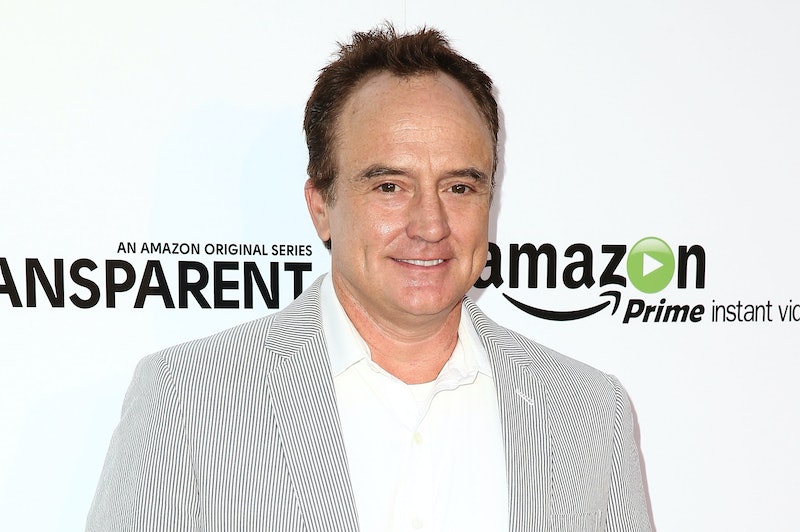 I have some seriously strange television crushes, like Gaius Baltar from Battlestar Galactica, Gob from Arrested Development, and the White House staffer with the most ill-fitting suits of all time, Joshua Lyman from The West Wing. By default, then, I also adore Bradley Whitford, who brought the impish and scrubby but super smart Deputy Chief of Staff to Jed Bartlett to life. Flash forward to 2015 when I still love Whitford and am thinking about re-rewatching The West Wing on Netflix, which would be quite the undertaking seeing as I'm already knee-deep in Friends, but there's good news that means I can hold off: Bradley Whitford is slated for a guest spot on Brooklyn Nine-Nine, playing Jake Peralta's dad!

Peralta, played by Andy Samberg, actually has a lot in common with Josh Lyman's character: smug, a little cocky, doesn't seem to take things all too seriously, but really, really good at his job. Whitford is a good match to play Peralta's absentee dad, then, Captain Roger Peralta, an airline pilot. I love a good guest spot, and Whitford has done his fair share of cameos that are pretty solid. Currently, he plays Marcy, a crossdressing businessman wh is a friend of Mara on Transparent, the show about a transgender woman played by Jeffrey Tambor. Here are some of his past great hits that you might recognize Josh Lyman from.

Sisterhood of the Traveling Pants

If it seems like everyone and their mom has been on Law & Order, it's because they have. Whitford is no exception, and he's appeared on TWO different iterations of the show, as a goodie and a baddie. He played a monstrous actor accused of sexual assault on SVU, another man for Olivia Pope to hate and eviscerate (thank god for her), and on the short-lived Law & Order Los Angeles as a lawyer.

Cabin in the Woods

If you didn't love Cabin in the Woods, the ultra meta comedy-horror film that came out in 2012, you're trippin. Whitford plays... well, a minion of the devil, basically, at a very organized facility orchestrating situations in which unassuming teens and children are ritually sacrificed. Steve Hadley, Whitford's character is, for all intents and purposes, basically exactly the same as Josh Lyman, except he works at a facility that pits horrific creatures like werewolves and merman against victims.

Drunk History is a go for almost all of my favorite comedians; Bill Hader and Nick Offerman have both appeared in the series. And so did Whitford, as Wiliam Jennings Bryan, the attorney opposite Clarence Darrow in the Scopes Trial of 1925, debating whether or not public schools should teach evolution. Kenneth—I mean, Jack McBrayer, plays Darrow, and grills a very nervous and sweaty Whitford/Jennings Bryan about the Bible on the witness stand.

In the greatest, most meta guest spot ever, Whitford showed up on the set of Parks and Recreation for an episode as Councilman Pilner. Diehard West Wing fans such as myself probably geeked out because 1) Whitford was again on the same government-based set with his former West Wing costar Rob Lowe (Sam Seaborne), 2) he and Leslie do a walk and talk a la Aaron Sorkin complete with fast-paced dialogue and strange metaphors, and 3) LIVE AMMO. That is, there's a point where Pilner says "We play with live ammo around here," a direct callback to a line in The West Wing. I die.