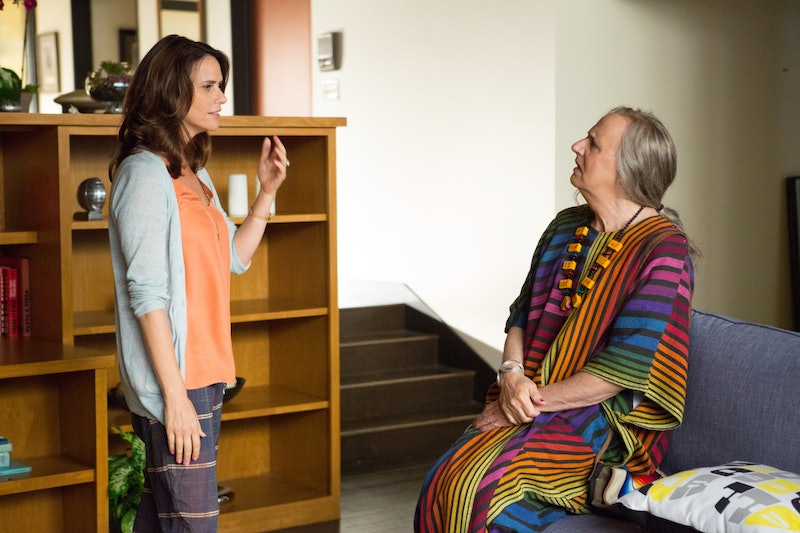 Amazon Original Series Transparent won two Golden Globes on Sunday night. The series was named best comedy or musical series, coming out victorious over Orange is the New Black and HBO's Girls; and show star Jeffrey Tambor won the award for best actor in a TV comedy for his portrayal of Maura, a transgender woman. This marks the first time an Amazon series has won a Golden Globe award.

During the acceptance speech for best comedy or musical series, show creator Jill Soloway offered heartfelt thanks to the trans community, dedicating the award to Leelah Alcorn, a trans teen who made headlines earlier this month after committing suicide.

"I want to thank the trans community. They are our family and they make this possible. This award is dedicated to the memory of Leelah Alcorn, and too many trans people who died too young. And it's dedicated to you, my trans parent, my 'moppa,' if you're watching at home right now. I want to thank you for coming out because in doing so you made a break for freedom, you told your truth, you taught me how to tell my truth and make this show, and maybe we'll be able to teach the world something about authenticity and truth and love. To love."

Both speeches stood in stark contrast to that of Jared Leto from last year's Golden Globes. Leto, who took home the best supporting actor award for his own portrayal of a transgender woman in 2013's Dallas Buyers Club, touched a nerve when he joked about waxing his body while not directly addressing any of the challenges facing transgender people, specifically AIDS and HIV.

I've twice had the opportunity to interview Soloway, whose previous work has included Six Feet Under and United States of Tara. The first was for The Advocate in February of last year, before Amazon had announced they would be picking the show up for a complete season. At the time, Soloway addressed concerns raised by members of the trans community worried that Tambor's casting would cause more harm than good.

"It’s a line to walk," Soloway told me. "But I feel like it’s a bit of a safe space for the reality that a lot of older trans women don’t necessarily medically transition. I think there’s a story we can tell here. ... For Maura’s journey and where she’s going to go, particularly at her age — whether or not she’s going to medically transition is something we can play with.”

In September, I again interviewed Soloway, this time for HelloGiggles in an article about the need for increased diversity in the television. I asked Soloway about the challenge of trying to portray a trans person without actually being one, herself.

"Hire trans people in as many positions as possible and listen, listen, listen," she told me. "Read as many books as you can, put yourself in the immersive position of wishing to be schooled and educated rather than defending what you’re used to. I think privilege is so pervasive that people don’t even understand how it works within their own psychology."

Though Soloway had enlisted the help of a number of trans people, hired trans actors to play supporting characters, and made herself available for constructive criticism, the show's writing staff was made up entirely of cisgender (non-trans) individuals. Taking her own advice, Soloway set out to hire a trans woman to join the staff late last year. In November, it was announced that trans musician Our Lady J had been hired on as a writer for the show's second season.

Some trans activists have criticized Soloway's decision to hire Our Lady J, citing the singer's questionable etymological account of a number of anti-trans slurs, along with her overall relatability.

"It bothers me a lot that someone who is so completely unlike the average, everyday trans women most of us know, someone who doesn't credibly represent how most trans women think, feel, or believe, someone who obviously has no interest at all in accurately representing the perspective of most trans women, was chosen for this position," Rebecca Juro writes at Bilerico . "This was an incredible and extremely rare opportunity for a real, honest trans community voice to be heard in the mainstream, but instead it's going to be wasted on yet another Hollywood phony."

Personally, I haven't weighed in on whether or not I think hiring Our Lady J was a step forward or back for the show, and I have no plans to. From the start, this has been Soloway's show, and one needs to trust that the business decisions she makes all serve to further her existing creative vision. The same goes for the initial casting of Tambor. When I first heard that he would be portraying a transgender woman, I couldn't help but recall that he was so directly involved in so many of Arrested Development 's more trans-insensitive jokes. Soloway and Co. chose him, however, and the decision has clearly paid dividends.

More like this
Yomi Adegoke On The Offline Diaries & The Power Of Representation
By Jessica Morgan
The Music Industry Continues To Fail Black Women
By Precious Adesina
'Heartstopper's Kit Connor Called Out Twitter For Making Assumptions About His Sexuality
By Nola Ojomu
How To Fight For Reproductive Rights, Based On How Much Time You Have
By Courtney Young
Get Even More From Bustle — Sign Up For The Newsletter