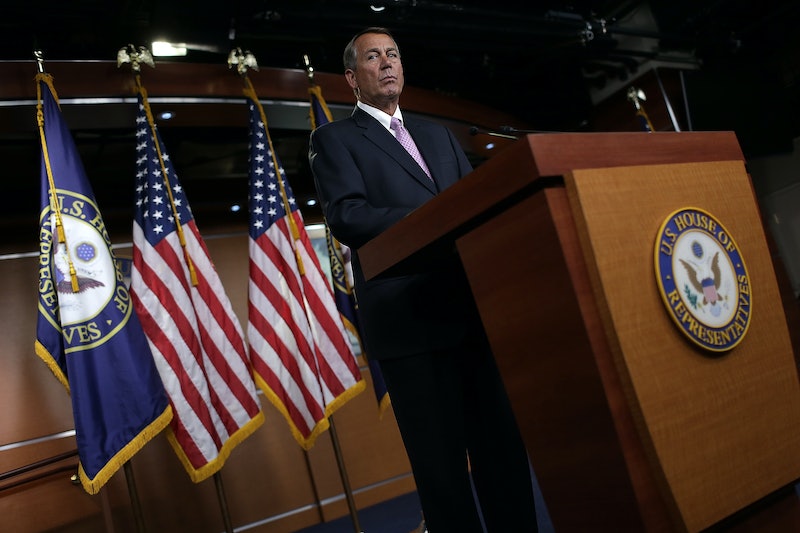 A bartender in Ohio was indicted last week on criminal charges for threatening to kill John Boehner. Michael Robert Hoyt, known as "Bartender Mike" at the country club where he worked, allegedly planned to either shoot the House Speaker or put something in his drink because he felt Boehner was mean to him and was responsible for Ebola, WCPO in Cincinnati reports.

Hoyt was fired from the Wetherington Country Club in October, and then called police to complain that it was the fault of the Speaker of the House. When police officers visited his home, he told them that he was Jesus Christ, he was going to kill Boehner, he had a loaded Beretta .380 automatic, and he regretted not putting something in Boehner's drink during the five years he served him at the club. A few days later, police searched Hoyt's home and found several boxes of ammunition, a notebook with writings about Boehner and Ebola, and envelopes with lists of country club members.

Authorities said Hoyt was treated for a psychotic episode about two years ago, but stopped taking his prescribed medications after six months. The bartender told investigators that he heard the devil's voice in his speakers, believed evil people were going to "chop him up," and thought Boehner was the devil, according to WCPO.

Investigators told the television station that Hoyt sent the following in an email to Debbie Boehner, the Speaker's wife:

Mr. Boehner, I sincerely do not want to embarrass anyone. I am willing to drop all of this if you and Dr. Bob Buring deliver my termination report to me personally, or transport me to a secure location where the three of us can have an honest conversation. If I had any intention of hurting Mr. Boehner, I could have poisoned his wine at Wetherington many, many times. I do not believe I have lied about anything nor exaggerated. This is extremely urgent. Tuesday. Earlier the better. Talk to Dr. Bob Buring. PLEASE!!! We can work together and succeed or …..fail miserably. My phone died. I am at home. I have a dog and cat so please do not bust in. I will leave my lights on inside and out all night. You probably already know where I live. REDACTED Matson Ave. Deer Park, Ohio.

He was indicted Jan. 7 and has been charged with threatening to kill a U.S. official.

Michael Steel, spokesman for the Speaker of the House, said in a statement:

Speaker Boehner is aware of this situation, and sincerely thanks the FBI, the Capitol Police, and local authorities in Ohio for their efforts.