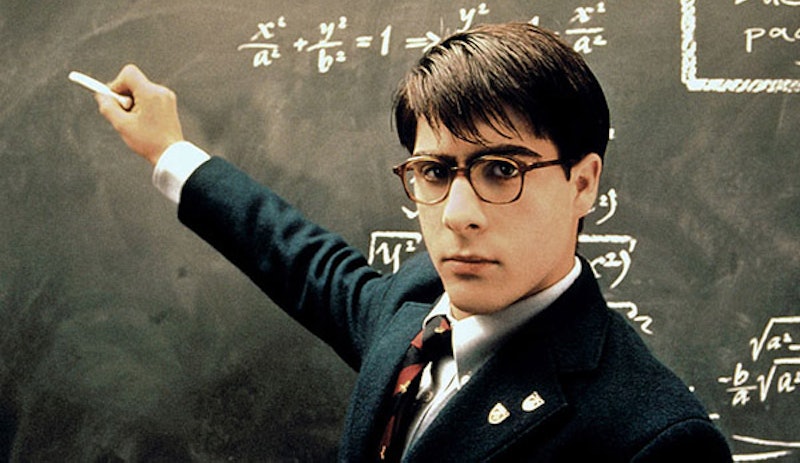 You might want to take cover behind that carefully annotated copy of Swann's Way, sapiosexuals, because I have some rough news for you: being a sapiosexual is a sham. Yes, the new dating trend of identifying yourself as someone who prioritizes intellect above all other qualities in a romantic partner — now one of the hottest new ways to self-identify on Ok Cupid — is totally bogus. But before you beat me to death with your other carefully annotated copy of Swann's Way (in the original French, of course), hear me out.

The term "sapiosexual," according to Sapiosexual.com, was coined in 1998 by LiveJournal writer Wolfieboy, to describe someone who was more drawn to the specifics of a partner's mind than the specifics of a partner's body. Awesome so far, right? In a 2002 post, Wolfieboy quotes a sapiosexual who described their interests thusly: "Me? I don't care too much about the plumbing. I want an incisive, inquisitive, insightful, irreverent mind. I want someone for whom philosophical discussion is foreplay." Love and passion between two minds that is so intense, all the physical specifics don't even matter — sounds amazing, right? But the new conception of sapiosexuality currently buzzing through our interwebs is a bit different than that playful, pansexual version offered by the original sapiosexuals. In fact, the new version of sapiosexuality — much of it driven by Loner Wolf's wildly viral Sapiosexual Test — seems to exist as an almost total inversion of the original ideas behind sapiosexuality. Instead of being about widening your scope (and your legs) when it came to deciding who fit into your dating pool, the new sapiosexuality seems to be about narrowing the scope of your love life, and just hanging a sign on your pants that says "No Dum-Dums Allowed."

Take a second and take the test, if you haven't already (and be sure to note how it has totally dropped the omnisexuality present in the original sapiosexual writings, and is also weirdly ableist). I scored 54 percent sapiosexual, much to my dismay (I was hoping for, like, 9 percent).

You might think, as a woman, that I'd be championing sapiosexuality — finally, a movement to love women for their minds, instead of their ability to do the Dougie in a revealing blouse! But I don't actually think this new version of sapiosexuality is good for women, or anyone else for that matter.

Of course, it's fine to be turned on by intellect. It's a factor in most attractions anyway, and it is more than fine if a sharp brain is all you seek in a partner. In fact, if you do actually get your rocks off having someone recite "Kubla Khan," then rock on, my friend.

But before you swear off ever dating someone who doesn't care about David Foster Wallace, or seems to care too much about pro wrestling, consider the five reasons below that might make you want to swear off sapiosexuality instead.

1. Dating Is a Great Opportunity to Learn About People Who Are Different Than You

So you're ultra-intellectual, totally bookish, cerebral to the point of basically being one of those giant brains in a jar that ruled that one planet on Star Trek. That's awesome. But that doesn't mean that you can't have chemistry with anyone less intellectually inclined than you — or that someone who is less hyper-intellectual doesn't also have things to teach you about life.

We deprive ourselves of a great opportunity to experience new things, and develop our empathy for others if we only date people who are exactly like us. That applies to those with different backgrounds, life experiences, and also, I think, intellects. The idea that someone who doesn't read as "smart" has nothing to offer or teach us about life isn't just offensive; it's untrue. I've liked and even loved men who would not describe themselves as intellectuals, and being exposed to their interests, thoughts, and lives has only enriched my own. It's impossible to grow spiritually — or even intellectually, really — if you only hang around with people who want to argue about The Marriage Plot or tell you how great The Wire is.

2. Traditional Intellect Isn't the Only Valuable Trait in a Relationship

How happy are you going to be in a sapiosexual match with someone whose traditional intellectual IQ is through the roof, but whose emotional IQ is in the toilet? Will your relationships have passion and sadness, fights and adoration, and all the other things that make love wonderful? Or will you just drink scotch and discuss Hanna Arendt? Emotional intelligence — as well as street smarts, creative talents, and a host of other things that don't fall under the "intellectual" banner — are all qualities that can make someone a wonderful and caring partner, and not giving any of them a second thought when looking for love is doing yourself a disservice.

3. There Are Many, Many Different Ways to Live an Intelligent Life

The Sapiosexual Test is dependent on some extremely strange definitions of "intelligent." What the hell does "dress intelligently" even mean? Someone balancing a slide rule between their breasts? I think what it actually means "dress like an upper middle class person with a formal education," which brings us to the real heart of the problem with new sapiosexuality: it's all about taking a very specific set of characteristics, and saying that they represent how all intelligent people live their lives.

There are people who are smarter than any of us who have learning disabilities that prevent them from being able to recite a long, complicated piece of literature. There are wildly intelligent people who don't "speak eloquently." There are former National Merit Scholars who choose to spend their days dressed like Megadeth groupies (hello). Smart people conduct themselves in all different kinds of ways, and live all different kinds of lives — and if you stick to just dating sapiosexuals, you may never get to see any of them.

4. Being Hung Up on the Trappings of Intellect Is Immature

Let's go back to those test questions again for a second. "I enjoy subtle flirtations or mind games that leave the mind wondering whether someone likes me or not." "I prefer complex discussion over a glass of wine, than vapid navel-gazing at a restaurant."

What do either of these things have to do with intellect? Are only smart people allowed to drink wine? Are only dumb people allowed into restaurants? Are all the vineyards of the world controlled by MENSA? Are stupid people only permitted to drink a special kind of whiskey that's been aged in David Guetta's basement?

These trappings are not a sign of sophisticated intellect. They are a child's idea of how sophisticated adult intellectuals flirt with each other, and thus a good sign of how mature many new-jack sapiosexuals are going to be.

The most troubling thing to me about new sapiosexualism is that it seems to draw a dividing line between thinkers and feelers, and ask you to choose a side. Are we supposed to only pick one? Can't you be both a thinker and a feeler? I mean, what the hell kind of people do you think the writers who wrote the great epic poems you're jizzing your pants over were?

Hey, I know that there's only so much that you can cover in a quiz. But sapiosexuality, as determined by the quiz, views the world in bizarrely black-and-white terms. In this world of sapiosexuality, you're either a nerd or a bully, a physics student or the prom queen. In the world of new sapiosexuality, high school lasts forever.

But didn't you guys see The Breakfast Club? We're all all of those things, all at once! And one of the best things about growing up and getting out of high school is the ability to explore and embrace all the different parts of your personality, especially the parts that seem to clash — the part that enjoys high-minded conversation and the part that is ride-or-die committed to pro wrestling, the the part that loves Zizek and the part that loves Zeppelin. Hell, David Foster Wallace loved Silence of the Lambs . Our inner contradictions, our confusing, messy parts are what make us amazing, and discovering someone else's confusing, messy contradictions is one of the most amazing parts of dating.

So if you're genuinely just turned on by intellect anywhere you find it, more power to ya. But if you think that the only way you can be happy is to exclusively seek out and associate with lovers who are exactly like you — in intellect, values, or whatever else — I beg you to reconsider. There's a big, beautiful world out there, and exploring it all with your heart, soul, and fun-bits wide open is part of what makes life amazing.