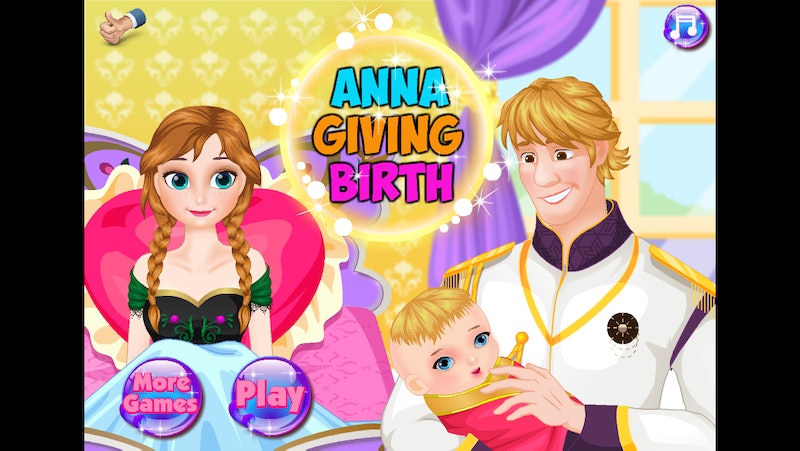 I have not seen Frozen (I know, I know. I’m a garbage monster who deserves to be locked away in an ice dungeon for the rest of eternity), but that didn't stop me from being an integral part of the birth of Anna's child. As a matter of fact, I delivered the baby. And guess what? YOU CAN, TOO! All thanks to an unlicensed mobile game called Anna Giving Birth (via BuzzFeed). The object of Anna Giving Birth: deliver Anna's baby. That's it. (And yes, there's also a game called Elsa Giving Birth. I haven't played yet, but I think I have a solid idea as to what it's all about.)

Seconds after the mobile game's existence was brought to my attention, I’d downloaded it onto my cellular phone. It sounded like my type of weird. I was sort of right. This game might even be too weird for me.

Two minutes after I'd begun the game, the game was over. I had no idea childbirth could be so efficient! But the game wasn't over-over: After the baby had been delivered, set in a crib, and swaddled, I could "play" again. I could deliver infinite infants.

By round four, I sensed my eyelids getting heavier. Anna Giving Birth's jazzy department store soundtrack seemed to grow louder and louder. And then, a mashup of sorts began to take place in my mind. I imagined what it'd be like if the characters from the only other mobile game I've played showed up in this game. It was a Kim Kardashian: Hollywood/Anna Giving Birth crossover. Of course that's what happened. Yes, KK:H is always on my mind. Yes, I still play KK:H on the regular. And no, this isn't a cry for help.

This is the tale of Anna Giving Birth + Kim Kardashian: Hollywood

Anna met a tall blonde guy. They fell in love. They got hitched. They conceived a child.

When it was baby birth day, Anna was soOoOoOoOo excited. She couldn't stop smiling as the baby doctor ran a Clarisonic over her stomach. She noticed that the heart-shaped monitor next to her bed began to turn blue. She asked the baby doctor what it was. "It's a magic meter," the baby doctor replied. Anna smiled and nodded.

Anna smiled when a menacing red X appeared on the inside of her wrist. She continued to smile as the baby doctor stuck her with a needle.

Anna went right to sleep. The baby doctor smeared what looked like an orb made out of L.A. Looks Styling Gel over Anna's stomach.

Just then, the Kardashian-Jenners crashed into the delivery room. Everyone blamed each other for their being late.

The baby doctor nodded. Anna's family is so intense, she thought to herself.

As the swirls continued to swirl, the delivery room door opened again. It was Simon Orsik.

"Excuse me," the baby doctor said. No one acknowledged her. She cleared her throat and raised her voice a tad louder. "Excuse me." Everyone looked at the baby doctor. The baby doctor suddenly felt nervous. "Um, we're only supposed to let two family members in the delivery room. There are way too many people in here."

After the glowing orb finished swirling, a baby appeared. The Kardashian-Jenners gasped and clapped.

The baby doctor grabbed the scalpel and chopped the umbilical cord with one swipe.

Kris gasped and told the baby doctor to be careful. Kim intervened.

The baby doctor appreciated Kim's intervening. She reached for a giant Q-tip and uttered an incantation.

And POOF! The incision was gone. Anna's baby belly was gone. The Kardashian-Jenners stood in stunned silence. They'd never seen anything like it. Real magic!

The silence was broken when Willow Pape barged through the door. In unison, the Kardashian-Jenners, Simon, and the baby doctor told Willow to leave.

Willow yelled expletives as she stomped through the hospital. Kourtney peeked her head out into the hallway.

The baby doctor set the baby on a bed. Everyone felt really weird about that odd leaf situation happening.

Kourtney continued to stew about The Pape.

Khloe elbowed her and told her to *looks left, looks right* Let it goooooo, let it gooooooo!

Everyone oohed and aahed some more at the new baby.

The door swung open. "Seriously, no more visit—" the baby doctor began. But she stopped when she realized it was the baby daddy. The baby daddy scooped up the baby.

"Please forgive me for my tardiness," the baby daddy said. "I was battling a demon in the hallways. A screeching hellion with a tacky blonde weave."

"WILLOW PAPE!" the Kardashian-Jenners yelled together.

"Yes. I vanquished The Pape," the baby daddy said, beaming with pride. He looked down at his new child. "What is the youth's name?"

Everyone oohed and aahed at this name choice. The baby doctor grabbed a third orb and threw it at the ground. A puff of green glitter materialized.

When the green glitter cloud disappeared, the baby doctor was gone."This is the weirdest hospital," Khloe said. Everyone oohed and aahed.