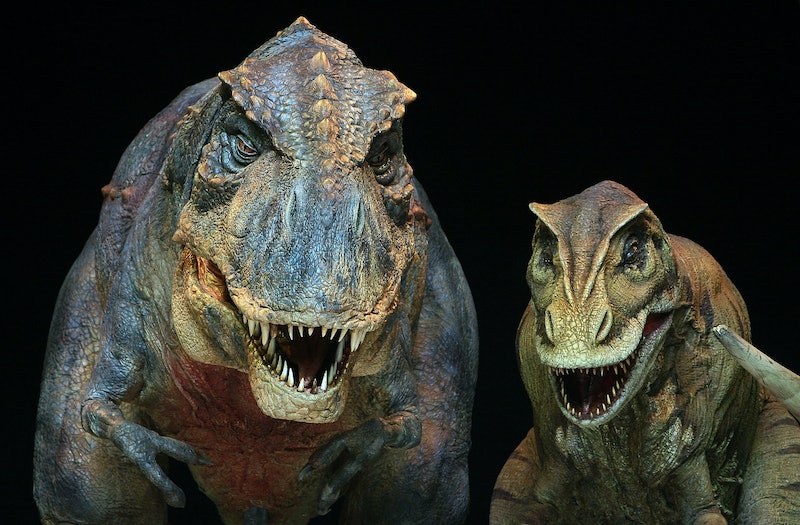 If you follow trends in self-published erotica — and who doesn't, right? — you'll recall that 2013 was the year of the dinosaur erotica publishing boom. Texas college students Christie Sims and Alara Branwen pioneered the trend by publishing a handful of Kindle novellas where modern ladies basically got pounded by Littlefoot from The Land Before Time, and before long, the two were presiding over a mini-empire of self-published dino-sex novels. Their business got reams of media attention, mostly because no one could believe how wildly lucrative writing dinosaur erotica was. It is very lucrative. Very, very lucrative. Whatever you dream career is, writing about triceratops blowjibbers is probably more lucrative than it. Which is why, for a few months there, people couldn't seem to stop discussing it.

I watched all of this from a bemused but intrigued distance. I knew that there was a whole jungle of self-published erotica on Amazon, almost all of it weird and some of it insanely renumerative (try to not mention the six figure book and film deal that the author of that One Direction erotic fan fiction landed to your friend who's currently laboring away in an MFA program). But as much time as I had spent laughing at the cover of Ravished by the Triceratops, I began to wonder about the content inside it. Yes, people are deranged, but could this many people be this deranged? Or could some of this stuff actually be...you know, a little sexy? Could a regular gal like me — whose sexual tastes run more towards gratuitous Michael Pitt nudity than velociraptor dongs — find anything to jill off to in these books? It was my duty, as a writer and as an American, to found out if there was anything legitimately strokable about these books for the average reader — or if millions of our friends and neighbors do just genuinely want to bang a terrible thunder lizard.

I downloaded five books at random — some because they were bestsellers, some because I liked the titles — and settled in for the weirdest Tuesday night I'd had in a while. I have handily rated them each for you, on a scale of zero to four dino boners, based on how erotically stimulating I foound them. You're welcome! Now, if you'll pardon me, I need to go climb into my root cellar and think long and hard about the path that my life has taken.

1. Taken at the Dinosaur Museum by Christie Sims and Alara Branwen

Synopsis: A charmingly goofy recent college grad gets a job as the night guard at the titular dinosaur museum (huh huh huh, you said "titular"). While working night watch all alone, she had an anonymous sexual encounter with a pachycephalosaurus, who bones her with its tail, goes down on her, and then finally penetrates her vaginally with his enormous dinosaur boner (I assume that you, like I, are wondering if dinosaurs actually had boners? The answer to which is: maybe?)

She becomes accustomed to the fact that dinosaurs are alive and fuckable VERY quickly, and even dismisses another tiny dino that has also come to life in favor of more pachycephalovin'. After her lover dino-hits it and then dino-quits it, she straightens herself out, and learns that post-gradlife doesn't just mean paying bills on time and being responsible; it also means fucking dinosaurs.

Choicest Line: "The dinosaur let its head rest on her shoulder as it parted her shaved pussy lips with its tapered tail."

I feel the need to note, for the sake of my good name and any even vaguely dignified employment that I may seek in the future, that I am not sexually attracted to dinosaurs. I'm honestly barely even sexually attracted to human beings most of the time (shave your neck beards, you Millennial gross-os). But this was some competently written erotica. And parts of it legitimately gave me a tiny tingle in my parts. Since the story is written from the lady's perspective, there are long stretches where it feels like you're just reading regular erotica, until you come across a word like "scales." It was also, notably, the only one of the books that I sampled that featured a scene of clitoral stimulation. I guess there's a reason these women are millionaires!

Synopsis: I admit it, I didn't read Taken By a Billionaire Dinosaur Part One, and that might have put me at a disadvantage here. But from what I could piece together: in an alternate version of the present day, dinosaurs live among us as part of society, and are beginning to dominate humans, sometimes in cute ways (like replacing Zooey Deschanel with a dinosaur actress on New Girl) and sometimes in creepy fascist ways (like not letting humans drive on the same roads as dinosaurs).

In this world, our heroine — former assistant to the world's richest and most powerful dinosaur — plans a revenge against him the day he is to travel into space, by somehow sabotaging his rocket ship. Her exact revenge plan is kind of unclear, but seems reminiscent of that astronaut lady who wore diapers and tried to murder someone a few years back. Anyway, our heroine gets busted by her ex-boss, who I guess is like the Christian Grey of T-Rexes; they have rough sex, and then he has her sent to jail (which seems legit to me. She was trying to sabotage his rocket ship! That's a federal crime, even when done for erotic purposes!)

3. Abraham Lincoln, Fuck Lord of the Moon by Catherine DeVore

Synopsis: Abraham Lincoln faked his assassination so that he could travel through a magical pool to the moon with a bunch of female Japanese martial artists who also have sex with him. He has a magical sex penis, and for some reason, he needs to take it to the Moon to truly fulfill its destiny. On the moon, there is a Japanese sex emperor whose penis is also magic. The two men's penises light up and they duel with them, Darth and Luke-style. Then they wrestle, Lincoln wins, the emperor performs oral sex on him, they have anal sex, and Lincoln becomes king of the moon.

Choicest Line: "'You rule the Moon! You are the sex god, not I! I am sorry to have doubted you!'"

Review: 1.5 dino boners (yes, it's still dino boners — I'm not going to come up with a whole new rating system for each book, god. I mean, I clearly have too much time on my hands, but not THAT much time)

I'm starting to wonder if these really amazing titles are being specifically created to cover up boring novels, because the fucking in this book did not seem particularly lordly, by Moon or Earth standards. And I'm one of those profoundly troubled women who thinks Lincoln was a little sexy, so really, if this can work on anyone, it should have worked on me. But no dice — I felt nary a tingle. Also, the stuff with the female ninjas was kinda racist. Saying the title out loud was probably the best (and most sexually arousing) part of this book.

4. Taken By the Sasquatch by Audrey Grace

Synopsis: Ellie, a hard-nosed land surveyor, is literally taken by a sasquatch, in that he carries her to a cave because he wants to stop her group of land developers from destroying his habitat. He can speak English, and for a while he holds her captive and she kind of likes it and it is basically the plot of that movie Labor Day.

Then she escapes, and brings her jerk boss back to Sasquatch's cave, to convince him not to build on the land. The jerk boss remains a jerk, and Sasquatch ties him up and spanks him. Then Sasquatch initiates a sexual encounter with Ellie that seems to start as non-consentual, but then she gets into it. Then Sasquatch tells her she's pregnay with a Sasquatch baby, because he's close to the earth and knows this kind of stuff.

Choicest Line: "God, what the fuck was happening to her? Had she really just allowed herself to be taken by the Sasquatch?"Rating: 1.5 dino bonersI liked Ellie as a character — she was the only person in any of these stories to be even mildly startled by the idea of a non-existent creature putting the moves on her, and I did enjoy her continual disbelief about the situation she'd gotten herself into. I know what it's like to get involved with a man who seems like a mistake from day one too, Ellie! I lent this very hot guy $200 in 2003 and he never paid me back and eventually I had to break into his house and steal his X Box. But while Ellie was an empathetic character, I just couldn't get into the sex. I'm willing to give it that this might not be my demo — I'm not big on the consent-play tip — but just didn't find the way the sex was described to be particularly fleshed out. Everyone in all of these stories is just going on and on about how they're so stretched out by these huge monster cocks, which is all well and good, but I do believe successful erotica needs more to it than just giant boners and powerful thrusting. Those Texas college girls get to sleep on beds made out of caviar and Maybachs because they include clit play in their books — you'd think that would give some of these other authors ideas, but no. I bought a fifth book, but I immediately realized that I had accidentally purchased a book about Victorian enema play, and frankly, it was too late for me to deal with that. I got the gist of the self-published erotica trend, and I have to go to Pilates in the morning.

More like this
I'm 42 & I've Never Had Sex. Is It Too Late?
By Sophia Benoit
Please Respect Mia Khalifa’s Rebrand
By Charlotte Shane
Here’s What Sarah Jessica Parker’s Canned Cosmo *Actually* Tastes Like
By Emma Garza
What Is “Night Luxe?” Breaking Down TikTok’s New Aesthetic
By Courtney Young
Get Even More From Bustle — Sign Up For The Newsletter