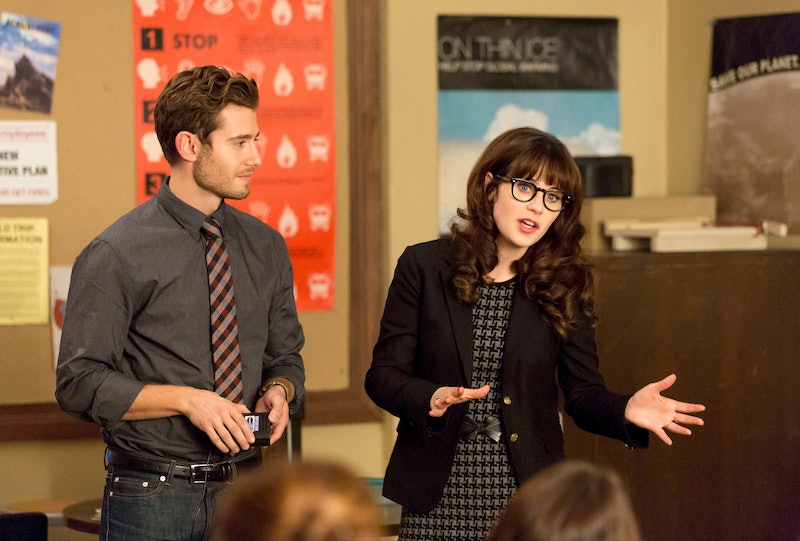 If you’re anything like me, then chances are you spent a good portion of Tuesday night’s episode of New Girl checking to see if Zooey Deschanel’s baby bump is already starting to show. (It’s not, BTW.) But those of you who were able to focus on something other than the actress’s exciting pregnancy news probably took notice that Jess and Ryan’s “Coming Out” about their relationship to the school did not go that well. And by “not that well” I mean it was pretty much a total disaster.

See, here’s the thing: Coach was tired of listening to all the hot female teachers gush about Ryan, which inspired him to do a little research and discover that it's completely OK for Jess and Ryan to disclose their romantic involvement to the school. However, upon listening to every teacher’s field trip proposals, Jess decided that Ryan’s was the best one. And it honestly was, especially in comparison to everyone else’s lame ideas. (Some would even say it was out of this world.) The problem is that the rest of her cohorts viewed it as favoritism, which led to a whirlwind of stress for our dear Miss Day.

In fact, tempers got so out of hand that Jess decided to forego choosing Ryan's astronaut field trip altogether for one of a more foilage nature. (Get it?) But being the charming British gentlemen that he is, Ryan handled her decision with pure grace and even felt bad that the situation was becoming such a major issue for her. Pretty adorable, right? Well, it seems Jess thought so too. Because when she finally decided to stand up in front of everyone and defend both herself and the relationship, she also accidentally let it slip that she's in love with Ryan. That's right, folks. Jess busted out the L word. And guess what? Ryan said it back, in front of everyone!

Seems to me like this relationship is starting to get pretty serious. And while I'm still firmly aboard the Nick and Jess train, I can't help but warm to the idea of Ryan. (Damn you, Julian Morris, and your overall adorableness!) But the bottom line is, if this keeps up, the writers may just decide to incorporate Deschanel's pregnancy into the plot.