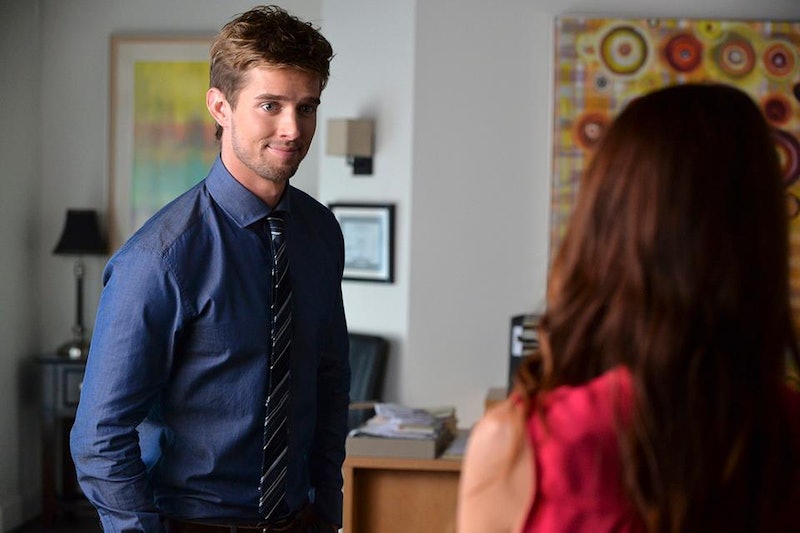 I can't honestly say that I'm surprised to be writing this post — I mean, Ashley Marin's romantic track record on PLL is questionable at best. But on Tuesday night's new episode of Pretty Little Liars , "Fresh Meat," Jason DiLaurentis and Mrs. Marin kissed and, if I'm reading PLL's clues correctly, totally did the dirty. Which means that Ashley's officially taken a romance nosedive in Rosewood, just when I thought she could only go up from going on a date with Detective Wilden. And what makes it that much worse is that Hanna caught Jason sneaking out of her house — so cue up one of the many classic Hanna Marin quotes to help me get through this.

We all know that this is a no good, extremely bad idea on Ashley's part. Yes, she's lonely and yes, Hanna's going away to college and sure, it's kind of difficult to not get wrapped up in Jason's wounded puppy dog looks, but this is SO not OK. Especially, need I remind you, that there still is absolutely no proof that Jason (or Jason's twin, according to Bustle's own Kaitlin Reilly) isn't the ever-elusive "A." Jason turned Ali into the police for Mona's murder, but does anyone really believe that he's totally innocent in the happenings surrounding Ali's death? He might not be "A," but Jason's hands sure as hell aren't clean.

What exactly is he trying to pull here? Does Ashley look like an easy target? I mean, Jason just started a new job at her office and now he's kissing his little sister's friend's mom to "thank her" for making him dinner and listening to his story about Mr. DiLaurentis blaming him for Ali going to prison? And WHAT THE HELL is Ashley thinking kissing him back and inviting him upstairs? She's a grown woman and she can do whatever she wants, but still, Jason's definitely not the guy to fill her empty nest when Hanna goes to college.

More importantly, however, if Jason really is "A," she essentially just got into bed with the ultimate enemy. At this point, the Marin's have taken enough crap from "A" (remember when Ashley almost got framed for murder?) — sleeping with Jason can only make things worse, especially if it becomes more than a one-time thing.

More like this
Vecna Officially Has A Fan In 'Stranger Things' Star Jamie Campbell Bower
By Alyssa Lapid
Yes, Joseph Quinn Is Actually Playing The Guitar In This Epic 'Stranger Things' Scene
By Alyssa Lapid
Jurnee Smollett’s Heart Is Healing
By Rebecca Carroll
Lizzo Proved She’s Team Jeremiah During Her ‘The Summer I Turned Pretty’ Review
By Grace Wehniainen
Get Even More From Bustle — Sign Up For The Newsletter