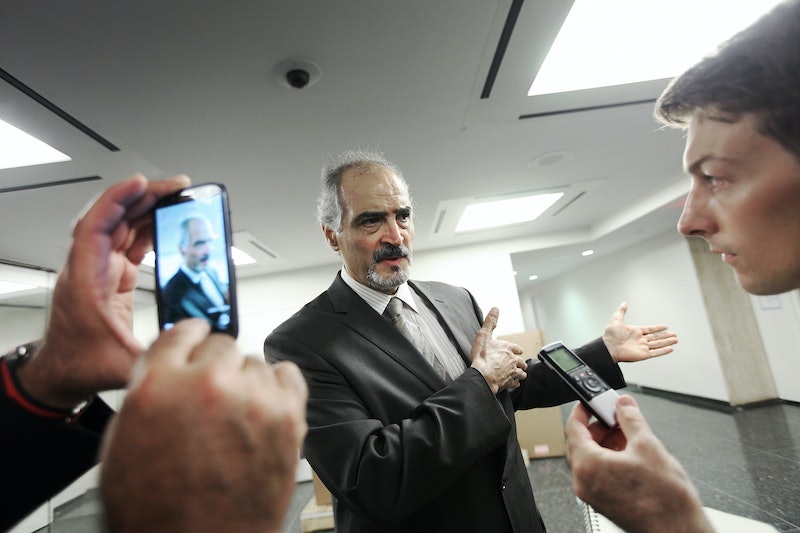 After weeks of international indecision on how to reprimand Syrian President Bashar al-Assad on his use of chemical weapons against Syrian civilians — and years of bloodshed in the war-torn state — there's finally a next step forward: The United Nations Security Council agreed on Thursday to draft a resolution calling on Assad to hand over his supply of chemical weapons.

According to the resolution, “the use of chemical weapons anywhere constitutes a threat to international peace and security.” Syria “shall not use, develop, produce, otherwise acquire, stockpile or retain chemical weapons, or transfer, directly or indirectly, chemical weapons to other states or nonstate actors.”

This comes amidst news that UN investigators will look at seven possible sites of chemical weapons attacks in Syria. Three of the attacks allegedly took place after the highly-publicized August 21 attack that sparked so much international outrage.

“This resolution makes clear there will be consequences for noncompliance,” said US Ambassador to the UN Samantha Power. Power, a former journalist and academic, built her career on calling for more international intervention in genocides and civil wars. As recently as a few weeks ago, the New York Times reports, she complained that "there is no viable path forward in this Security Council."

Because any of the five permanent members of the Security Council — the United States, Great Britain, France, Russia, and China — can block any resolution, progress on Syria has been especially difficult. It wasn't until after President Barack Obama started moving towards a military strike on Syria in August that Russia began pushing for diplomatic solutions to the conflict.

But in order to get Russia's support, the Security Council agreement had to be all bark and no bite. Though resolutions can include promises that members will use military force if a state against whom the resolution is passed fails to comply, the resolution on Syria's chemical weapons holds no such clause. Instead, members of the council would have to meet again in order to approve a separate resolution authorizing the use of military force.

Now all that's left is a formal vote on the resolution, which experts say will happen after the Organization for the Prohibition of Chemical Weapons votes on procedures for inspecting and eliminating Syria's weapons. That vote could come as soon as Friday, in which case the Security Council might vote on its resolution by the end of the day.

More like this
What To Know About Martin Bashir After Watching 'The Crown'
By Bustle UK
Read Dan Levy's Heartbreaking Message After The Club Q Shooting
By Stephanie Topacio Long
Iran Has Issued A Death Sentence Over Mahsa Amini Protests
By Catharina Cheung, Darshita Goyal and Maxine Harrison
The Best Chemical-Free Shampoos & Conditioners
By Marissa DeSantis
Get Even More From Bustle — Sign Up For The Newsletter