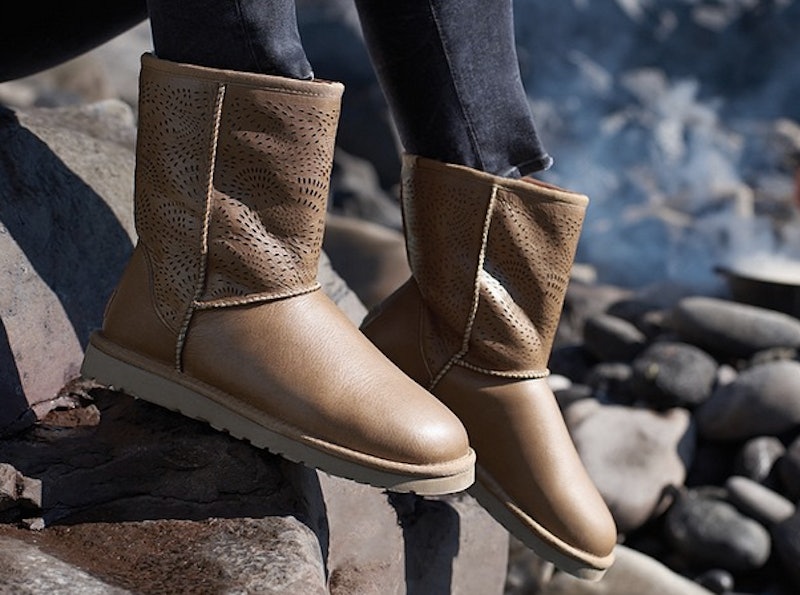 Let's talk about Ugg boots, shall we? You know, those fuzzy eyesores favored by Basics (no disrespect) who just need to be cozy while they slurp on a Peppermint Mocha Frappuccino in the middle of February? Maybe you have a pair that you wear around the house or to brunch when you're too hungover to tie your shoelaces. Like Birkenstocks before them, Ugg boots might be cool again.

In a feature called "The Return of the Ugg Boot," British Vogue's Laura Weir and Julia Hobbs declare that Uggs are back, baby!

The sheepskin Ugg is no longer the preserve of a hungover milk run, or the yummy mummy. Instead, a new generation of style stars have appropriated the ultra-comfortable boot. "I wear mine with hand painted Aries jeans, a Moschino tote, Palace Skateboards hoodie and Meadham Kirchhoff star hair clips." says designer Ashley Williams. "It was my first outfit of 2015 — Uggs are the marmite of the foot wear world, they're so comfortable. I love them."'

Ignoring the fact that I'll never be able to afford any of the items they suggest I pair my furry boots with, I do agree with one part of this: They're totally still the marmite of the footwear world. I mean, they have "ugh" in the name. Still, Uggs recently brought Chrissy Teigen on board as brand ambassador, which absolutely ups their cool cred — and might even be enough to convince me that this is one ugly shoe I could potentially get behind.

Ugly shoes have been trending for awhile now, so it's not exactly shocking that the creme de la creme of schleppy winter boots would be making a comeback, much to my chagrin. Or, as Weir and Hobbs put it, "autumn's take on traditional knitwear, plush sheepskin and a looming summer season obsessed with a bohemian spirit, is paving the way for an Ugg comeback."

Whatever your thoughts on the matter, here's a photo of André Leon Talley sporting a monogrammed pair to brighten your day. Anna Wintour looks mighty pleased, don't you think?