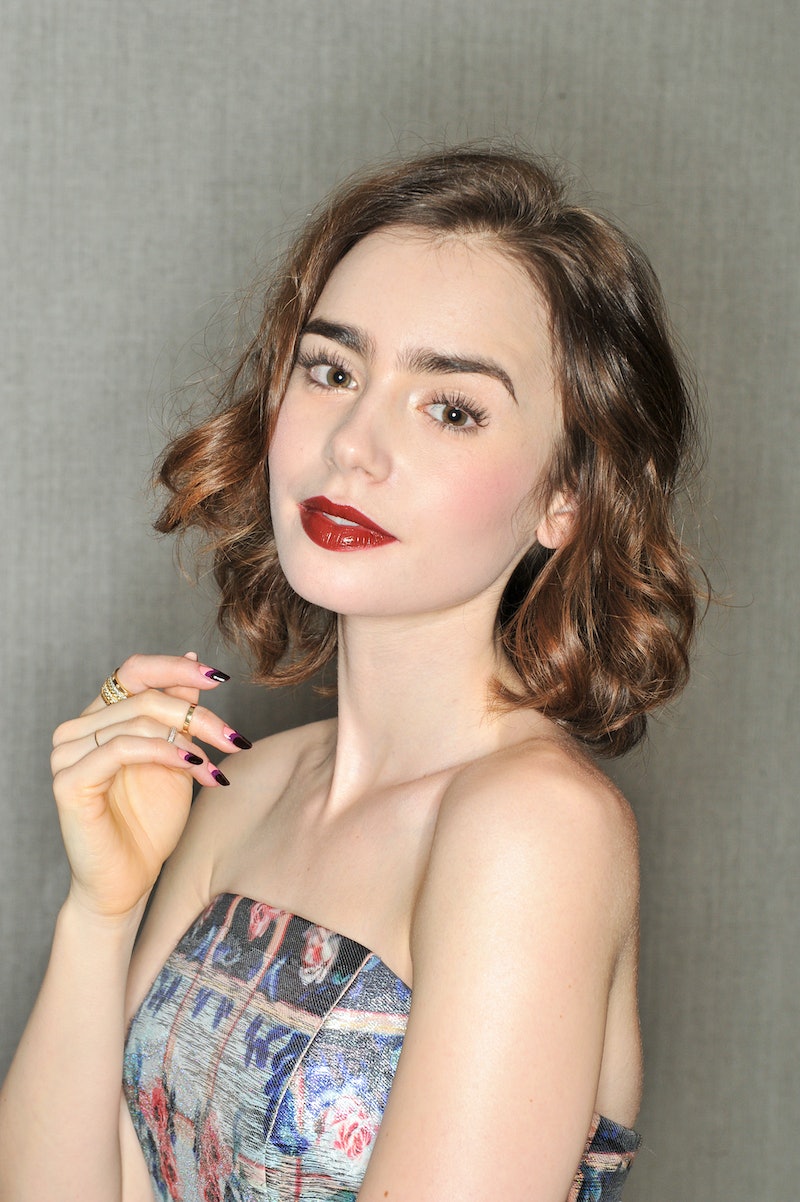 Some actors have a bucket list. They want to play a certain time period, a part in a particular historical event, or even a specific superhero. But Lily Collins, the 25-year-old star of films like Mirror Mirror, The Blind Side, and The Mortal Instruments: City of Bones, wanted to play a pregnant woman. And in the 2015 film Love, Rosie , she was given her chance. I sat down with the gorgeous and personable star to talk about the film, and why this particular circumstance was high on her professional bucket list.

"I was talking to a producer and he asked, 'What other kind of things woud you want to do in film?' I said I'd love to do a romantic comedy, I'd love to play British, and I'd weirdly love to play pregnant," she said. "The next day he's like 'Well, take a look at this [Love, Rosie] script and let me know what you think.' I found myself laughing out loud and crying."

Love, Rosie is about two childhood friends in England (Collins and The Hunger Games' Sam Claflin) who remain close as they both choose different paths — one is off to America for school, the other becomes unexpectedly pregnant.

"What I loved the most about it is, it's such a relevant topic: Young teen moms. I think reality TV and the topic of teen moms is not being shed in a positive light. And I really liked that Rosie becomes empowered and becomes who she is because of the fact that she became pregnant, not in spite of," Collins said. "It really showed a positive twist on something that's more negative in the press today."

Collins is the daughter of Jill Tavelman and musician Phil Collins. She attributes her healthy attitude towards young pregnancy to her relationship with her own mother. "My mom and I are super close, we're best friends. I always saw her as this young, vibrant mom," she said.

Contrary to many movies that portray pregnancy, Love, Rosie, doesn't focus on the pregnancy or the motherhood, but both. We see Rosie literally through the child's conception to her teenage years.

"The baby I held on set was 9 days old. The mom was in the other room, and I was so terrified I was going to hold it wrong," Collins revealed. "What was amazing is there was a scene that was written where the baby starts hiccuping, and on cue the baby started hiccuping. The crew could not believe the luck, and I started crying, it was so touching and so sweet, it fed into the reality of the moment. It was one of those movie magic moments that you're blessed that the camera's rolling."

Collins' Rosie is quirky and clumsy, relatable and real. "Both of our names are flowers," Collins said. "I've been told a lot that I look very delicate, I'm very petite, fragile looking. I feel that I want to show with the characters I play this resilience and strength, an inner-confidence. Like the nature of a flower is to bloom, I found this in growth in Rosie."

Love, Rosie is in theatres February 6. See the trailer below: