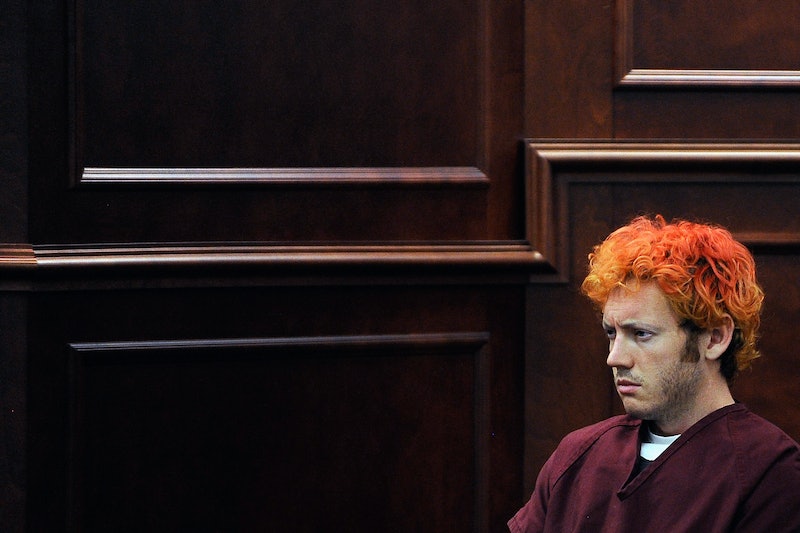 It's been a two-and-a-half-year road, but we're nearly here. The trial of James Holmes, the man charged for the horrific theater shooting in Aurora, Colorado, is about to get underway. That's not to say things are going to suddenly start speeding along, however, as The New York Times notes — jury selection, which is slated to begin next week, could still take months. And that eventual jury will have a hugely important question on its hands: how will James Holmes' mental health impact his verdict?

Perhaps any speculation about these things feels, at this early date, a little premature. Obviously, evidence hasn't even been presented yet. But as high-profile trials go, this one is basically free from any drama relating to Holmes' direct guilt — nobody, not even his own attorneys or his parents, are arguing he didn't commit a grisly mass murder. (In an open letter, James Holmes' parents wrote: "He is not a monster. He is a human being gripped by a severe mental illness.") Rather, they're pushing for his acquittal on the grounds that he was insane when he planned and executed the shooting, claiming 12 people's lives back in 2012. Basically, the question of Holmes' mental state is the entire trial, with both a verdict and sentencing hanging in the balance.

So, what are the possibilities here?

Holmes is Convicted And Executed

Simply put, the difference between Holmes being deemed insane at the time of the shooting could ultimately be the difference between life and death. Colorado prosecutors have made it clear they intend to seek the death penalty if Holmes is convicted, while his defense attorneys argued he committed the crime in the midst of a bout of psychosis.

If the jury ultimately doesn't believe that argument, then you'd have to imagine the death penalty will be squarely on the table. In spite of the political controversy surrounding capital punishment, prospective jurors would be faced with sentencing him for an absolute horror of a crime, and it's not hard to imagine them deciding he be killed.

Holmes is Convicted and Sentenced to Prison

Luckily for the prosecution, pushing for the death penalty doesn't lock them into that sentence or none at all. The jury can always still decide to convict, but choose a life sentence in prison instead (anything shy of that on a conviction seems unlikely as anything, frankly).

While this might come as a disappointment to many, some among the victims' families presumably included — as The New York Times notes, District Attorney George Brauchler settled on the death penalty after consulting with them — but it still means that Holmes will received one of the harshest retributions our criminal justice system has.

Holmes is Found Not Guilty by Reason of Insanity

This is Holmes' only real avenue to escape death or the prison system, though in practice he'd still be under lock and key — if a jury decided that he wasn't guilty due to mental illness, he'd be institutionalized at a mental health facility. This is precisely what happened to John Hinckley, the man who attempted to assassinate former President Ronald Reagan in the early 1980s. Significantly, however, Hinckley hasn't remained under detention for that entire time, recently getting permission to go on scheduled visits to his mother as his condition's improved.

Whether this could actually happen ultimately boils down to what expert assessments will be presented by the defense during the trial. They're already reportedly in possession of some reports conducted into Holmes' mental health, which the prosecution has accused them of wrongfully withholding. Whatever evidence can be brought to bear on this point will likely decide the trial's outcome.