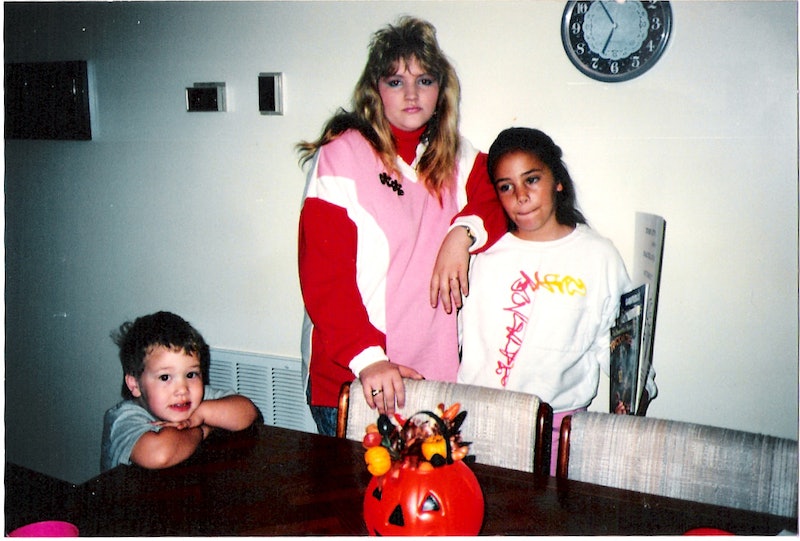 My brother is eighteen years older than me, and the only time we ever lived under the same roof, I was too tiny and toothless to remember. When I was a baby, he was commuting to college, and by the time I was four, he moved out to attend med school. Four years later, he got married and moved to Indianapolis and then Chicago to complete his residency. Hence, I never really got to know him when I was a kid.

Calling him my “brother” almost felt disingenuous for awhile; While I loved him as much as I loved any family member, I never really got to know him. When I was little, I remember being incredibly intimidated by him. He went to med school. He drank Diet Coke. He watched Beavis and Butthead and listened to Rush and wore a leather jacket. I mean, he was the epitome of effortless cool to me (and he still is). But this emotional distance gradually changed as I started to grow up. As my tween brain expanded, filling up with actually important things besides the lyrics to N*Sync's "Bye Bye Bye," I slowly started to understand all his pop culture-inspired references and jokes. Spending time with him felt less like an awkward family reunion and more like how it should feel when you hang out with a sibling who shares the same parents as you. Our relationship finally developed after an 18-year extended hiatus—and it was so rad.

Now, we finally live in the same city, which I am super stoked about. I can actually drive to his house in less than an hour and we can talk about our days and live normal sibling lives.

If you also have a way, way older sibling, then you probably know these truths:

1. Your older, wiser sibling can introduce you to new things all the time

If it weren't for my brother, I probably wouldn't have tried sushi and Thai food for several decades. When I lived in Minnesota, the closest ethnic restaurant was a Taco Bell, and "hot sauce" equated to ketchup, so before moving to California, I was really sheltered, food-wise. My brother, who did his fair share of traveling the country, actually ate food which contained ingredients other than "flour, sugar, butter, corn syrup, corn." He also let me go through his entire CD collection, so I became very well-learned in real music, for which I am forever thankful.

2. You don’t fight as often

I've literally never had an argument with my brother. Ever. Whenever friends complain about how annoying their sibs are, I'm just like, "SUCKS FOR YOU!" I guess my brother and I have just never been around each other long enough to disagree about anything. I feel like the bulk of sibling squabbles happen as a result of competition for a limited amount of space and parental attention, but when you and your sibling are far apart enough in age, you often have such difference space/attention needs that it feels like there's enough for everyone. My brother and I also have identical ways to dealing with confrontation: We just don't. So, that helps.

3. It’s kind of like having a more relatable, awesome parent

I know that if my apartment burned to the ground, I could call him and he would come help me pick up the pieces without lecturing me about how I probably shouldn't have let my apartment burn to the ground. I mean, he might. But I would feel less shameful and pitiful than if it were my dad coming to the rescue. Much-older siblings offer all the comfort and security of a parent without any of the guilt. IT'S A BLESSED LIFE, YOU GUYS.

In my case, I didn't really want to inherit any of my brother's clothes (no offense), but my sister-in-law (who I consider bona fide family) has donated many amazing '90s dresses to my wardrobe.

5. Their advice is usually super solid

Instead of being preachy, your older sibling will give you useful advice. They're also much more skilled at remembering what it was like being your age, so you can actually discuss dating and college and work without feeling judged or weird.

7. They will teach you how to deal with your parents

Since they've spent many more years with them, your sibling understands and knows your parents much better than you do. They've probably already gotten busted for things, like throwing parties when your parents are out of town, and not-so-surreptitiously smoking pot in the basement. They've already pushed boundaries and tested limits, so they can identify them for you. You might be spared the same severe punishments, which is obviously really helpful.

8. While your relationship may seem distant at first, you eventually form a really tight bond

While having a brother or sister who is significantly older than you undoubtedly has some built-in challenges when it comes to forming an ultra-close sibling bond, I can almost promise it gets better once you grow up a little bit and your personality becomes more seasoned. Before you know it, you're not just a "little sister/brother" anymore. While siblings who are close in age tend to have more experiences together as little kids, you get to save the bulk of that awesome hanging out for when you're both adults. And since you didn't have all that bothersome bickering as kids, getting drunk together as grown-ups is infinitely more fun.