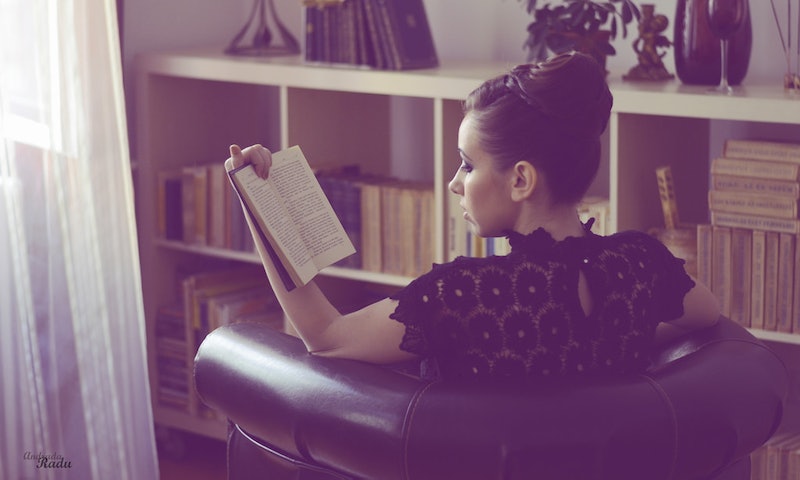 If your home is anything like mine, you can expect to be snowed in much of the month of February. And that's just fine — as long as you have some good page-turners by your side. (And wine, of course wine.) But young adult fiction authors seemingly never take a break, even in the snow-ravaged depths of winter, so you won't have any trouble stocking your shelves with all kinds of new books.

Debut YA authors seemed to have chosen February as a major month when they are going to drop their heart-and-soul-filled first novels. You could literally just choose to read debut novels this month, and you wouldn't run out of reading material. And while February may be a month for lovers and long-term relationships with that holiday on the 14, it seems the relationship that will be jumping off the pages is that of sisters (hooray!), with a handful of novels focused on that unique bond.

This month you can be inspired, terrified, enraged, devastated, and full of wonder along with some truly memorable characters. Books will take you to a war-torn New York City, a trailer park, Vietnam, the middle of the woods, high up in a castle, and all kinds of dreamed-up fantasy lands.

Basically, once you get your hands on all of these, you're going to hope it continues to snow so you have an excuse to stay in.

This Side of Home by Renée Watson (Feb 3; Bloomsbury USA)

I've been saying that young adult novels need to contain more honest portrayals of sister relationships, and it's like This Side of Home appeared like magic to fulfill my hopes and dreams. Renée Watson's story follows not just sisters but twin sisters as they confront what they feel about their identity and culture as their traditionally African-American, rougher neighborhood becomes infiltrated by fancy coffee shops and new home buyers looking for the next "up and coming" place. Watson delicately balances a story about the day-to-day complications of growing up — college, boys, and friends — with the difficult discussion of gentrification and what that means for cultural identity and expectations.

If you'd trade a Valentine's Day-focused, lovey dovey February for a February that would instead scare the absolute bejeezus out of you, then pick up Courtney Alameda's debut Shutter. (The cover should have already tipped you off to that.) Micheline Helsing is the last descendant of the Van Helsing lineage, and as such, she has been blessed/cursed with the ability to see the auras of ghosts and is teamed up with other "monster hunters" to seek out and destroy both the corporeal and spiritual undead. But Micheline and three others (through a series of really unfortunate events) become inflicted and will die in seven days. Just trust me on this one, and maybe read with all the lights on because this is one book that will make candlelight seem for more terrifying than romantic.

Ugh, Heather Demetrios' I'll Meet You There is so good I can't even deal. Demetrios burst on the YA scene last year with Something Real, and then she quickly followed it up with Exquisite Captive, proving that sophomore slump has no power over her. But I have to say, third time is definitely a charm, because Demetrios' novel about first love, poverty, the pains of family, war, mental illness, friendship, and growing up (and, and, and) is excellent. Skylar has a rocky relationship with her alcoholic mother, especially when their double-wide starts to get a little too close for comfort. So she spends much of her time at the kitchy motel off Route 66 where she works and forms a relationship with the high school golden boy who came back from his stint in Afghanistan missing his leg.

City of Savages by Lee Kelly (Feb 3; Simon and Schuster)

Better hope you clear off your calendar when you start Lee Kelly's City of Savages, because you're going to be white-knuckle gripped from page one. Sisters Skylar and Phee must try to survive in the battle-torn New York City after it was destroyed by a world war nearly 20 years before. They're propelled by their mother's found journal from the outbreak of the war, and come face to face with cults, cannibals, and other terrors as they try to survive. It's a thrilling apocalyptic story, for sure, but Kelly also imbues her story with the powers of familial bonds and some seriously strong women.

Beastkeeper is more middle grade than YA, but this modern-day dark fairy tale is magical to just about any reader. Sarah has always known her life in suitcases, moving from place to place, but it's not until she starts to untangle the secrets of her family's curse does she know why. Her mother is running away from magic and what it promises to bestow upon the family. Hellison's lush and sometimes poetic prose transports readers into a magical world so vivid that its as real as the complex family relationships in the story.

My Heart and Other Black Holes by Jasmine Warga (Feb 10; Balzer + Bray)

Aysel and Roman, like many modern couples, meet online. Except this isn't Match.com; they meet on a side called Suicide Partners. Ever since Aysel's father committed a horrific crime, she has suffered through both public and private shame. She feels her only way out is suicide. And Roman is also looking for a suicide pact partner after he experiences a family tragedy. But once the two teenagers start to fall for each other, Aysel knows she won't be able to hold up her end of the bargain, and she tries to convince Roman to back out, too. Jasmine Warga wrote the book after the death of a close friend, and you can feel her pain in the pages through her characters.

Victoria Aveyard will pull you in to her exceptional debut with some seriously strong world building. Teenage Mare's world is divided between peasants and the elite, or the Red bloods and the Silver bloods. Silvers are blessed with magical powers and reign supreme over Mare and the other lowly Reds. However, all of that power could be lost when the Silvers realize that Mare has abilities of her own, so they pretend she is a long-lost Silver and sets her to marry the Silver prince. Still with me? Good. Because this is where it really takes off. Mare plays a chess game of loyalty and betrayal in the palace, helping a rebellion while still trying to save her own skin and people she has come to care about. You won't be able to put this one down until it comes to its thrilling end.

Two young women with similar names — Emily Delgado and Elizabeth Davis — are both teetering on the edge of an emotional collapse. In chapter one, we know that one of them attempts suicide, but we don't know which. Elizabeth has goth style and she copes with an anger problem. Emily looks like the girl next door (whatever that means) but she's quietly suffering from depression. The two come together in their high school English class to study Emily Dickinson, whose poetry resonates through both of them. Through Emily and Elizabeth, Cindy Rodriguez showcases all of the every day and life-changing stressors that affect young women, and she is able to add another layer by weaving in aspects of bi-cultural family relationships and Latino culture.

The Shadow Cabinet is the third book of Maureen Johnson's Edgar Award-nominated Shades of London series. The series started with teenage Rory heading to a London boarding school, where she finds that someone is mimicking the Jack the Ripper murder spree. No spoilers here, so if you want to get in on the action, you only have two books to read in the meantime to catch up — and believe me, you're going to want to. You're going to need a shoulder massage after finishing up this book because it is so, so tense and exciting throughout.

You know that little book The Handmaid's Tale by Margaret Atwood? Well if that's part of your essential feminist book list, you're going to need to get your hands on The Glass Arrow. Kristen Simmons' story is clearly inspired by Atwood, but she trades handmaids for fugitive women who are on the run from men who want to auction them off for breeding. Women are becoming an endangered species in her world, so they're worth even more, sending young girls and adults fleeing to the mountains to hide. This is where Aya has grown up. This dystopia about the loss of female human and sexual rights feels, oh, a little close to home today — which makes this book even more important.

Though Listen, Slowly is technically for children and middle grade readers, its author Thanhha Lai is so amazing that I'd be remiss to leave it off this list. Lai is the author of Out & Back Again, which won the National Book Award and was a Newbery Honor Book. Listen, Slowly is about a girl who comes to terms with her identity and family as a Vietnamese American. Mai has always identified as an American, a Californian to be exact, but when her grandmother wants her to travel to Vietnam with her, she molds and builds a new perception of herself.

The Distance Between Lost and Found by Kathryn Holmes (Feb 17; Harper Teen)

The Distance Between Lost and Found shows that surviving high school can be just as hard as surviving in the wilderness. Cruel rumors are going around the school about Hallelujah, named Hallie, and what she did with Luke Willis, the preacher's son. And what's worse is Hallie loses her friends, her self-confidence, and the trust of her very religious parents. (Duh, her name is Hallelujah.) So as Hallie withdraws, her parents send her off to a religious camp. On a hike, Hallie becomes lost with a former friend a new girl, and the three are forced to rely on each other to survive. Kathryn Holmes manages to honestly portray the devastation bullying can have on the mind and human spirit, and through this it will be hard to not cheer for Hallie the whole way through.

When My Heart Was Wicked by Tricia Stirling (Feb 24; Scholastic Press)

Besides having one of the coolest covers of the month, Tricia Stirling's debut When My Heart Was Wicked stands out by having of the most unique takes on magic. Lacy is divided between dark and light magic, with her mother Cheyenne pulling the strings on the dark side. When Lacy is away from her mother, her magic is used for good; she's a botanist and uses science mixed with magic to pull healing powers from plants. But Cheyenne won't let her stay away without a fight. Despite the seemingly simple dark-vs-light premise, the story, traditions, superstitions, the take on magic is wholly unique. Because hey readers: Is there really magic at work after all?

Pam Muñoz Ryan's Echo is middle grade yes, but it's beautiful, so if you're not going to read it, please, please give it to your younger siblings. Echo takes place over continents and time periods, but each story is wrapped up with the common theme of how music can heal, bond, and inspire people across cultures and beliefs. The story jumps from Nazi Germany, to the Great Depression, and to the point right after the United States enters World War II, and the protagonists are all disenfranchised and discrimiated against youth who find empowerment through music.

Twylla isn't the pretty, pretty princess in the castle; she's the executioner. She is poisonous to touch, and so she is forced to touch each prisoner accused of treason. The real star here, however, isn't Twylla (though she's no slouch of a character), its Melinda Salisbury's absolute feat of world building. She intertwines legends, mythologies, fairy tales, and political intrigue into one seriously fascinating world that you can't help but get lost in.