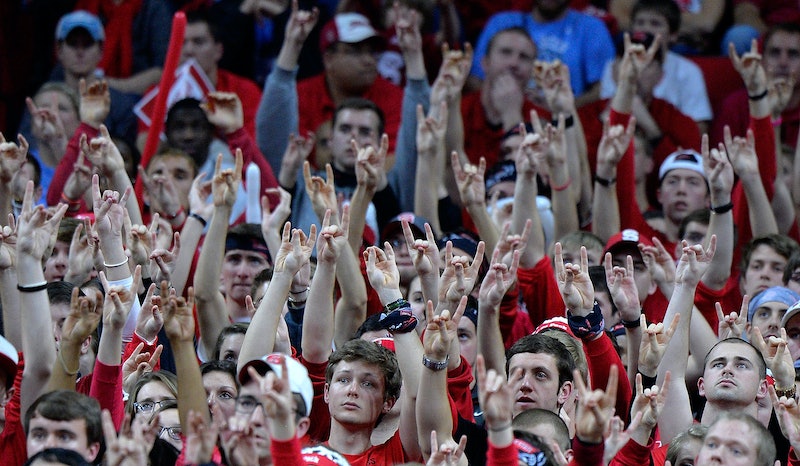 The 2015 Super Bowl is nearly upon us, and I can already sense a growing presence of sports-aggression in the air. Mega-fans are getting ready, their fists permanently clenched, tickets bought, and flat-screens updated. This video, which depicts an insane myriad of football fans somewhere in Europe leaving a game very, very distraught, is the kind of insanity I'm totally ready for come February 1st. Bring it, passionate sports people! I love all of you and your wildly irrational responses to game outcomes!

These fans, who are streaming down the escalator, are yelling at the barrage of cops, and just being generally pissed and kind of dick-ish. The cops don't do anything at first, but after a minute, they seemingly speed up the escalator so it can escort them out. Which pisses off the football fanpeople even more, so they start kicking the machine and screaming. It all just looks so, very reasonable. Go football! Go humanity!

But okay, can we talk about this violent affinity for sports for a sec? It's pretty well known that a lot of people have very strong feelings about sports. Like, aggressively strong. I don't really do sports so I don't really understand why humans scream and flail their bodies like possessed fish and get violent over a ball. But whatever, the heart wants what it wants, I guess.

Here are seven more times fans went totally bonkers over sports. Watch and feel yourself growing more and more impressed with their dedication to the cause.

1. A compilation of all the intense fans just doing their thing for a 2012 NBA game

4. Fans literally attack the football players in a Steaua vs Petrolul Footbal game

5. People watching an FSU vs Notre Dame losing their minds in the comfort of their own home

6. After the 2012 World Series, San Francisco Giants fans had feelings

7. In an Alton vs Edwardsville basketball game, things got pretty heated

More like this
Starbucks’ Chocolate Cream Cold Brew Tastes Like This Retro Candy
By Emma Garza
Kris Jenner’s Advice For Kim Kardashian Is Going Viral On TikTok
By Courtney Young
The Viral TikTok “30,000” Sound Fits Nearly Every Scenario
By Courtney Young
Meet The Disney Imagineer Bringing 'Guardians Of The Galaxy' To Epcot
By Charlie Mock
Get Even More From Bustle — Sign Up For The Newsletter