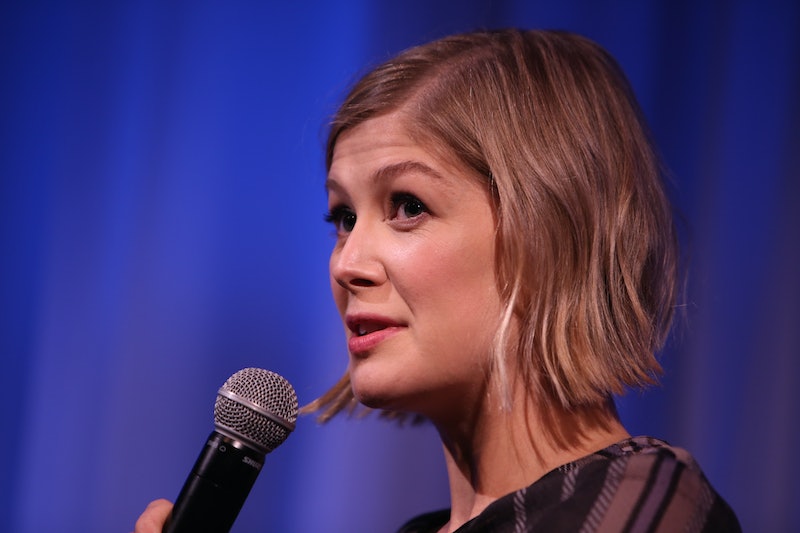 Anyone who saw Gone Girl, the thriller based on a New York Times bestselling novel of the same title, would probably say that the film affected them in some way. Whether it was Rosamund Pike's stunningly icy performance as Amy Dunne, the emotionally unstable wife and unreliable narrator of the film or the implications of gender and society in the incredibly messed up relationship she had with her husband, the topics touched upon in the movie made it undoubtedly a film that launched a thousand think-pieces. Of course, not everyone loved the movie, but any movie that makes people stop and think critically, especially in our fast paced-digital age where there are countless distractions, would be worthy of an Oscar nomination for Best Picture, right? Wrong, as you can see from the full list of Oscar nominations that came out Thursday, Gone Girl was snubbed for an Oscar for Best Picture.

Though Rosamund Pike did get a nomination for Best Actress, the much talked about movie is nowhere to be seen on the list for Best Picture, the highest award of the night. Considering the movie's hype and popularity, this may sound surprising. But it's actually not. Thriller and horror films rarely win Best Picture at the Oscars, and seldom are even nominated from the get-go.

Jacob Hall at Moviefone researched the list of past winners for the history of thriller and horror films being nominated, and he found that the first major showing for the genre didn't happen until 1960, with Alfred Hitchcock's Psycho. (The Oscars began in 1929.) And Psycho didn't win any of its four nominations that year, despite widely being considered a classic today.

Though there were some films in the genre in the following years that were awarded Best Actress and Best Makeup awards, the first actual thriller win for Best Picture was in 1991 for Silence of the Lambs. This begs the question of why this genre has largely gone unnoticed for the major prize, even if the film is as commendable as Gone Girl.

One possibility is that thriller and horror movies have a reputation for not being deep-thinking films in general. After all, it's hard to talk about a movie in the thriller or horror genre without alluding to whether it was scary or suspenseful enough to be "good," or whether it keeps you on the edge of your seat in the theaters. It's possible that this highly subjective viewpoint may make some Academy voters skeptical as to whether the point of a thriller or horror movie is too simplistic. Or perhaps voters often brush off the genre because of the gross-out factor in some of these movies (fake blood, anyone?) may strike them as either unrealistic or immature.

But if Gone Girl caused so many people to think deeply about the film — whether about the complexity of human relationships and the scary reminder that you never truly know everything about your spouse, or the ongoing meditation on whether it was a feminist breakthrough or a worryingly misogynistic portrayal of women, or even about the case for lady psychopaths in film — it wouldn't be so ridiculous to think the Oscars could make an exception to the rule. Oh, well. At least Pike still has a shot at winning Best Actress.