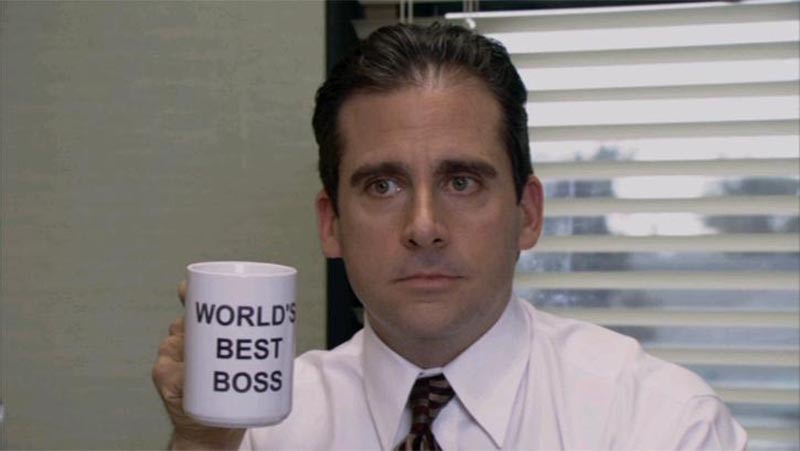 It's been almost 10 years since the American version of The Office debuted on March 24, 2005. I didn't start watching the show until a couple years after that, but even still it's been a long time since I've watched the first season and especially the first episode. But now I've re-watched it and I realized there are a lot of things you never notice in The Office pilot the first time you see it. It's understandable that you wouldn't catch everything the first time around, and without knowing the end of the series you're coming into the show blind.But having watched all nine seasons now, I could approach the pilot with a fresh perspective. To tell the truth, I re-watch The Office every once in awhile but I always cherry pick which episodes, and sometimes I'll skip the first season entirely. It's OK as far as first seasons go, but, in my opinion, it's not great. For me, seasons 3-7 were the best in the series. The first season is mildly better than the final season but only because Michael is there and there's no Jim and Pam cheating storyline. (That was THE WORST.)So having watched the pilot maybe once in my entire Office lifetime, I thought I'd go back and see how it measured up to the show as a whole. Turns out, you miss a lot if you're not aware of where the series ultimately ends up.

Michael is Kind of a Jerk

And I don't mean the naive, but still lovable jerk that he becomes in later seasons. In the pilot, he's just downright kind of an asshole. He makes sexist jokes about Jan, calling her Hillary Clinton because he's afraid of her (laaaaame). He walks around the office acting like Hitler to impress Ryan. He also pretend fires Pam as a prank. She cries and it's horrible.

Season 1 Pam breaks my heart. She has no voice and as such her character is rarely speaking above a whisper. She's clearly trapped in both her job and relationship. Knowing how much she blossoms once she leaves Roy gives me hope. But without knowing how things end up, the pilot casts a sad shadow for her.

Meredith Wasn't There Yet

You may not have noticed on your first viewing, but there's a woman in Meredith's chair that is not the Meredith we know and love. This office worker was played by Henriette Mantel and occupied Meredith's desk for that episode only. Kate Flannery, the real Meredith, didn't show up until episode two in the first season.

In Fact, Who Are All These People?

I guess casting hasn't been all sorted out by the time this episode was shot.

Certainly he cemented himself as a strong character in later seasons, but he was amazing from day one which is hard to do. He's also the most consistent character — as in the person he is in the pilot is the same person at the end. Sure, he changes a bit, but his core has stayed the same all the way through and that's some impressive acting on his part.

Baby Jim pining over Pam is possibly the best part of the show because you really feel the emotion. Actually John Krasinski in general is pretty great. It's his chemistry with the rest of the cast that is off the charts and really carries the first episode.

It's Basically Shot for Shot the British Office

The pilot used most of the same lines and gags as the British Office pilot. This lead to a lot of American vs. British TV comparisons which I don't think helped the show get off its feet as its own entity. Fortunately from there, the creators deviated from its parent show and it took on a life of its own.

Watching him pine for Pam and hate his job is really sad. He came so far by the end, both in his personal and professional life that I forgot he started out so low.

They're In a Different Office Building

During the pilot, this was the outside of their office building. It's so much less personal than their smaller office that we know and love.

It's Kind of Depressing

To be honest, the pilot is not the best representation of what The Office had to offer. It was kind of depressing between Michael's antics, Roy's treatment of Pam, and Jim's unrequited love. There were funny moments, sure. But on the whole I'm a little surprised NBC renewed the show. In fact, Rainn Wilson said it was "one of the worst-testing pilots ever, alongside Seinfeld."

But fortunately both those shows saw the light of day and captured our hearts forever.

More like this
‘Stranger Things’ Stan Megan Thee Stallion Grilled Natalia Dyer About Nancy & Steve
By Brad Witter
What's New On Netflix: A Third '365 Days' Movie & Lili Reinhart’s New Film
By Arya Roshanian
15 Photos Of The 'House Of The Dragon' Cast At The Show's UK Premiere
By Radhika Menon
Megan Thee Stallion Actually Auditioned To Be This 'P-Valley' Main Character
By Radhika Menon
Get Even More From Bustle — Sign Up For The Newsletter