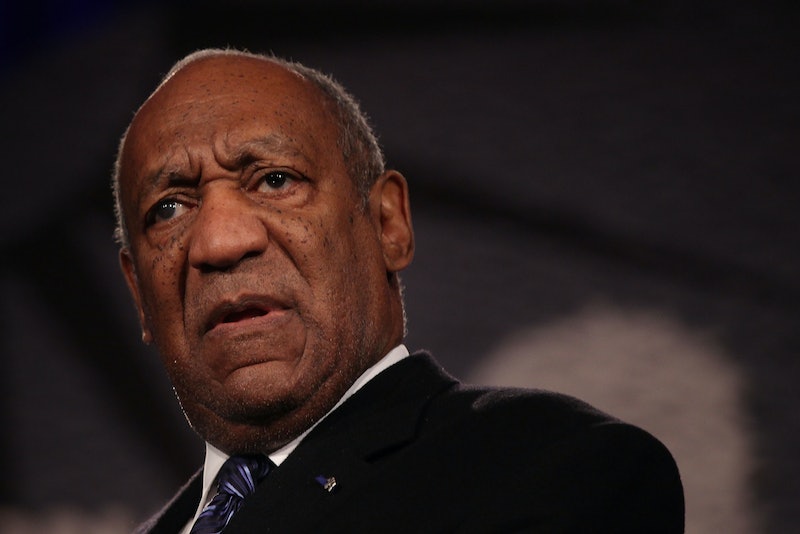 Even though numerous, damning rape allegations have brought against Bill Cosby by many women, including supermodels Beverly Johnson and Janice Dickinson, he has stayed silent when it comes to addressing specific claims. But, apparently, the accusations aren't keeping him quiet when it comes to his career, because Bill Cosby isn't letting the claims stop him from continuing his comedy tour.

On Thursday, Cosby issued a statement about his North American tour, saying he was "far from finished." He also thanked his fans for their loyalty and support, and of course, mentioned nothing of the allegations. Chuck Norris, the President of AEG Live, Cosby's entertainment group, said he couldn't cancel the tour dates because with "an artist that has not been charged or convicted — I don't think I can play judge and jury." Well, maybe he can't play "judge and jury, but the public sure can, and more importantly, we have to.

Dear Fans: I have thousands of loyal, patient and courageous fans that are going to leave their homes to enjoy an evening of laughter and return home feeling wonderful. I'm ready! I thank you, the theatre staff, the event organizers and the Colorado Community for your continued support and coming to experience family, fun entertainment.

First of all, "family fun" feels like a cheap barb. And second, this abrasive, arrogantly ignorant statement coupled with Norris' refusal to take a stance are just more symptoms of the willfully ignorant victim-blaming that already plagues the Cosby controversy. As Norris said, "If the allegations turn out to be true, I'm going to be appalled and disgusted. But at this point, I feel like I have an obligation to the people that want to see the show." Sure, Cosby might be "innocent until proven guilty," but that does not mean that the public should stay neutral.

A legal decision bringing charges against Cosby is not the definitive be-all end-all of this case, especially since almost all of the accusers made claims about events that happened decades ago. Although, one of the latest women to speak out about her encounter with Cosby is model Chloe Goins, who actually has a chance to have Cosby charged — she filed a report with the LAPD about an incident that happened with Cosby at the Playboy Mansion six years ago when Goins was 18.

But who knows if the LAPD will follow through with an investigation on the charges. It's crucial to keep this conversation going for two reasons: to question what it means when people can forgive others for their horrible misdeeds just because they are icons in entertainment, and to offer support to all the brave women who have come forward.

The court of public opinion is useful and damning. Whether or not Cosby will be legally charged, arrested or convicted remains to be seen, but he has to pay for the pain and damage he caused. If he isn't charged, he should at least not be rewarded by getting to continue his comedy tour.

Back in November, Cosby's lawyer released a statement explaining his stance on the issue. It reads,