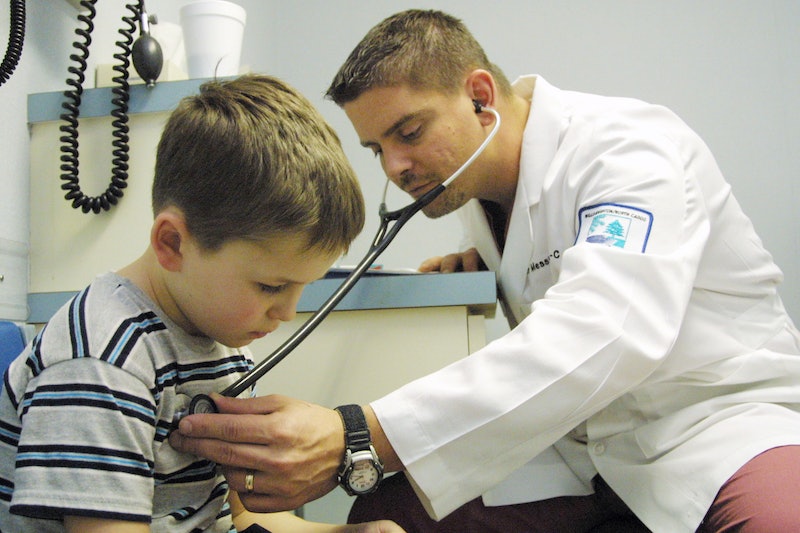 Did you get your flu vaccine this year? Probably wouldn't have mattered anyway. According to the Centers for Disease Control and Prevention (CDC), this year's flu vaccine is only 23 percent effective, most likely because it doesn't protect against the particular strain of virus that is making people sick. And even though the agency and healthcare providers knew that this would be a problem beforehand, saying "I told you so" in this situation just doesn't seem appropriate, especially considering this year's flu outbreak is one of the worst in recent history.

According to U.S. health officials, this year's vaccine is only 30 to 50 percent as effective as that of most previous years. When the vaccine operates at its best, doctors have seen success rates of about 50 to 60 percent of preventing patients from contracting the virus. But as Dr. Alicia Fry, a flu vaccine expert at the CDC, told the Chicago Tribune, "This is an uncommon year." Much of the vaccine's failure comes from the CDC's miscue when it came to predicting which virus would be making the rounds amongst the American populace this year. The vaccines are generally manufactured months in advance in preparation for the winter flu season, but this year, health experts discovered too late that the vaccine did not protect against the main virus culprit, H3N2.

Unfortunately for us, H3N2 ended up being responsible for nearly 70 percent of flu cases this year, and is also one of the deadlier strains of the virus in existence. In fact, when compared to other viruses, H3N2 causes twice as many hospitalizations and deaths, putting the young and the elderly particularly at risk this season. But H3N2 is historically difficult to protect against, as the virus is known to "drift" or mutate drastically from year to year. Even in "successful" scenarios, H3N2 vaccines are only around 40 percent effective. But this year, approximately 68 percent of the viruses making Americans sick are genetically different from the strains used in the vaccines, making them essentially useless when it comes to protecting you from the flu.

Even so, doctors and healthcare officials remain adamant that getting the vaccine is better than the alternative. After all, some years, flu vaccines have only been 10 percent effective, making 23 percent look like a resounding success. Moreover, it is unclear how successful the vaccine has been in partially preventing patients from contracting the flu — that is to say, getting sick from the virus, but not sick enough to see a doctor. Many experts agree that being vaccinated greatly reduces the chance of becoming seriously ill as a result of the flu virus, and furthermore, that being vaccinated will still protect against some of the other strains of the virus that might appear later in the season. After all, as the CDC’s Dr. Joe Bresee told NBC News, "...still, 30 percent of the virus that we are seeing is well matched to the vaccine."

However, the relative inefficiency of the flu vaccine has re-raised the importance of creating a universal flu vaccine that protects against all viruses from year to year. Flu vaccines have historically been one of the least effective in preventing illness — the measles vaccine, for example, is effective against 99 percent of infections. In order to develop a universal flu vaccine, scientists would need to protect against the proteins found inside a virus, rather than those found on the surface. This is a much more difficult task, and such a solution is still several years away, according to researchers.

But regardless of effectiveness, experts and officials agree that getting vaccinated is still a safe bet. As the CDC noted, "even a vaccine that’s only 10 percent effective could prevent an estimated 13,000 hospitalizations in older people over the course of a flu season." And considering that this year's flu season is expected to be particularly virulent, it's not great news that less than 50 percent of Americans, less than usual, have been vaccinated.

Of course, if you do contract the flu, there are a number of measures you can take to ensure that you're on the road to recovery as quickly as possible. Due to the low protection rate of the vaccine, the CDC has urged doctors and patients to consider antivirals like Tamiflu and Relenza, which, if taken within the first two days of symptoms appearing, can greatly reduce the length and severity of the illness.

Even though the flu season technically ends next month in February, doctors warned that people can continue to contract the virus months afterwards. So, if you haven't been vaccinated yet, head on over to your nearest pharmacy or hospital and get it done. After all, 23 percent is still better than nothing.