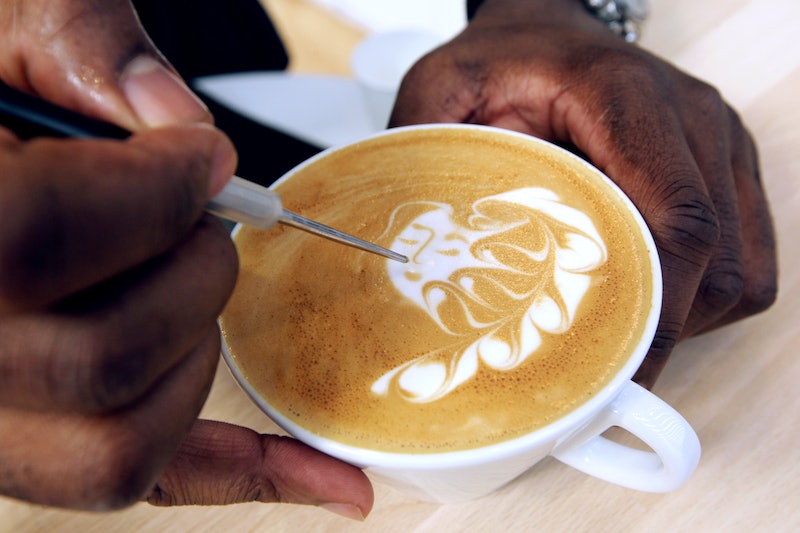 It's no secret that coffee culture has gone mainstream. If you live in or around any major U.S. city, chances are you've been to a local coffee shop, or two, or ten (I once went to nine coffee shops in one weekend on a trip to Portland, and I'm not ashamed). Sometimes these artisanal shops are even next door to a Starbucks, and the two live in perfect harmony. And I'm happy that we all get along, like a beautiful gaggle of bearded and tattooed geese.

I've noticed that people tend to forget their manners in coffee shops. They're unnecessarily loud, or rude to the baristas, or act in such a way that might make my mom say something like, "Their mama's just didn't raise them right!" And since moving to a place that frequently gets ranked as one of the best cities for coffee lovers and spending a lot of time in coffee shops, I've seen these bad manners run rampant.

I'd like to share some rules of etiquette that we can all use to make our time spent making googley eyes at the baristas that much more tolerable for each other. Take it from a former barista: We appreciate it when you're as sweet as the caramel latte we just gave you.

1. Don't ask someone to watch your stuff for longer than 10 minutes.

If you're going to ask me to watch your "stuff," that's cool — we all have to pee. But don't ask me to watch it while you "go grab dinner real quick," or "check out the sale next door." There's a 10-minute cap, because I have to pee, too!

The baristas, they're super cute, we all know this (especially the ones with beards). But if you want to ask them out, wait until the line is gone. There's nothing more painful than having an entire crowd of strangers watch you get shot down. And even if the barista says "yes," that's still holding up the line, guys. I've seen this happen from both sides, sadly, and it's super awkward for everyone.

If you need to plug in your computer/tablet/iPhone/toaster oven, move toward the plug — don't be the guy or gal that attempts to booby-trap walkers-by.

4. Remember: Camping is for the wilderness.

If you're going to be hanging out at the coffee shop for the better part of the day and night, buy more than one drip coffee. It'll not only help the business, but you'll be that much more ~*caffeinated*~ to finish your project.

C'mon, folks, we weren't raised in barns. Don't leave a bunch of dirty cups/wrappers/pastry crumbs on the table when you leave — the customers and baristas after you will be grateful.

6. Pay attention when you're waiting for your drink.

For real. If you order a "to go" drink, don't walk outside and sit down or make a phone call and disappear; the barista will be yelling your name in vain for a few minutes and then your drink will be cold (and that will just ruin the whole day).

7. Don't be afraid of talking to strangers.

For the love of God, sit next to strangers! Sometimes it's like trying to board an airplane; no one wants to sit next to you unless they have to. At my favorite coffee shop, the tables are bolted into the floors, forcing everyone to share butt-space, not unlike those airplane seats. I say embrace this adventure — it's a great way to make new friends.

8. Keep your dog away from my future latte.

I've seen so many people in coffee lines holding their dog and then putting them on the counter so they can pay for their order. This is not okay. Don't get me wrong; I think it's awesome that most coffee shops are dog-friendly, and I'll probably ask to pet your dog later. But my future iced mocha is behind that counter, and dog hair isn't really an add-on item I (or anyone else) will care for.

Nothing against drive-thru coffee chains, but craft coffees take time. Have you ever had a pour-over, or a French press cup of coffee? Believe me, it's worth the wait! Think of it as getting extra time to watch the cute barista pour Rosettas on top of your espresso.

10. Trust the barista to take care of you.

If the local coffee shop doesn't have the drink you want (I'm thinking of drinks of the blended and sugary persuasion, like pumpkin spiced lattes), trust that the barista can offer you a tasty alternative. Don't be rude about it! You might be surprised and find yourself a new favorite drink.