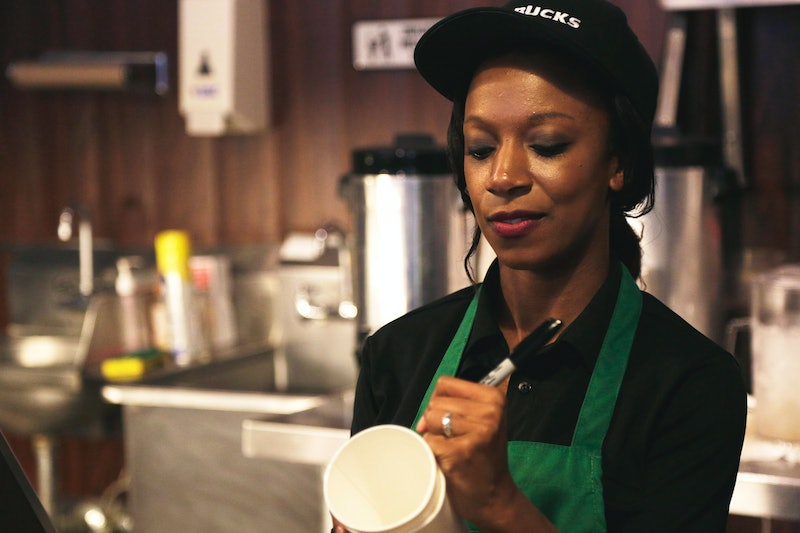 Pretty much as soon as you learn you need caffeine in order to complete more than two tasks a day and get shit actually done, you realize making this liquid gold is way more fun when you pay someone to make it for you. Not only are you ~treating yo’ self~ but you get to hang out in a coffee shop, which is, like, so adult and efficient of you.

Much like the rest of the world, I’m a coffee addict. And I like going to coffee shops to get my coffee because it’s way less sad than brewing a cup of Folgers at home with my plastic Mr. Coffee coffeemaker. I like ordering flavored iced coffees, knowing that I’m paying two dollars too much. And I like building relationships with my baristas whom I call “my” baristas, as though I have very personal relationships with them.

The thing is, I feel like I really do. I mean, your coffee order says so much about you. The other day, I ordered a soy chai and I wanted the barista to know that I was only ordering soy because I’m lactose-sensitive, not because I’m an alternative milk asshole, so I told him that. I don’t think he gave a shit either way, but he sympathetically nodded and I felt understood.

We form very important bonds with our baristas, subconsciously and consciously. They are the gateway to our caffeine addictions. They make sure our depleted selves are fueled, like omnipotent coffee gods. These are some of the “our” baristas:

This is the most intuitive human ever. She understands that mornings are disgusting. She has bags under her eyes that are still caked with last night’s makeup, but it looks heroin chic not sloppy. She passes no judgment when you accidentally say something dumb because you only got four hours of sleep. She makes sure not to make small talk, because let’s be real: no one needs that before 10 a.m.

This person is so on point with your drinks. He knows how to make the perfect amount of foam, and that foam is perfectly light and fluffy, not airy and vacant like cheap bubble bath. Your drinks are always perfectly hot. They’re never overly sweetened. He might as well wear a uniform that says BOW DOWN BITCHES.

They always add a smiley face or heart on your to-go cup. Sure, it's annoying as shit, but it also brings you out of your fatalistic world for, like, three seconds. You want to punch this barista for seeming so pure and bubbly and happy, but eh, they still give you coffee, so they can get away with a lot.

As soon as you either say “two extra pumps,” or “nonfat, sugar-free,” you have entered the zone of hate. Not even because it’s more work, because in reality it really isn’t (like, honestly, I was a barista for awhile). But just the fundamental principle of a person taking things into their own hands is just so aggravating.

5. The barista who WAS pissed until you ordered an iced tea.

All I have to do is pour pink or green watered Tazo into a cup? YAY.

You ordered a caramel frap. Which is not even real coffee, so how dare you even think you’re drinking coffee, when you’re really just ordering a glorified milkshake. Like, what has this world come to? Your barista may not be outwardly judging you as you ask for extra whip and extra caramel, but just know she is. She definitely is.

This barista seemingly wants to know everything about you and make you feel special. He will ask you how your day is going. He’ll laugh if you say something kind of quirky or sarcastic. He’ll point out that your Modest Mouse shirt is supercool and that even though he hated their latest album, he still loves their classic stuff. This is the barista you fall in love with, because it just feels like they totally get you on a very real level.

Ugh, that Vonnegut tattoo though. You somehow incorporate a literary reference, like “Wow, did you read the news today, it’s, like, so Orwellian, I thought it was 2014 not 1984.” You suck it up and order a black coffee (but pour half in the trash can and substitute it with milk and vanilla powder and raw sugar when he’s not looking).

She is overzealous with the espresso and syrup, and you love her for this. Girl gets your needs.

10. The barista who doesn’t even bother asking if you want whip because she knows you don’t, and this makes you feel incredibly self-conscious.

Is there something about your body that screams, “Please no more whipped cream, can you not see my grotesque body does not need the extra lard?” Are you being judged, or does this person just understand what it’s like living in a body-obsessed society? Probably both.

11. The barista who feels really bad for you when you tell her you don’t want whip.

Like, how could you give up on one of life’s simple pleasures like that? What are you, a monster? Poor you. Poor, poor you.

Oh hello, dead eyes. She hates everything. Everyone. She’s clearly overqualified and overeducated for this job, and she’s sick of making 10 dollars per hour. She makes your drink, and it’s mediocre, and she gives no fucks. Somehow, you love her even more for this.