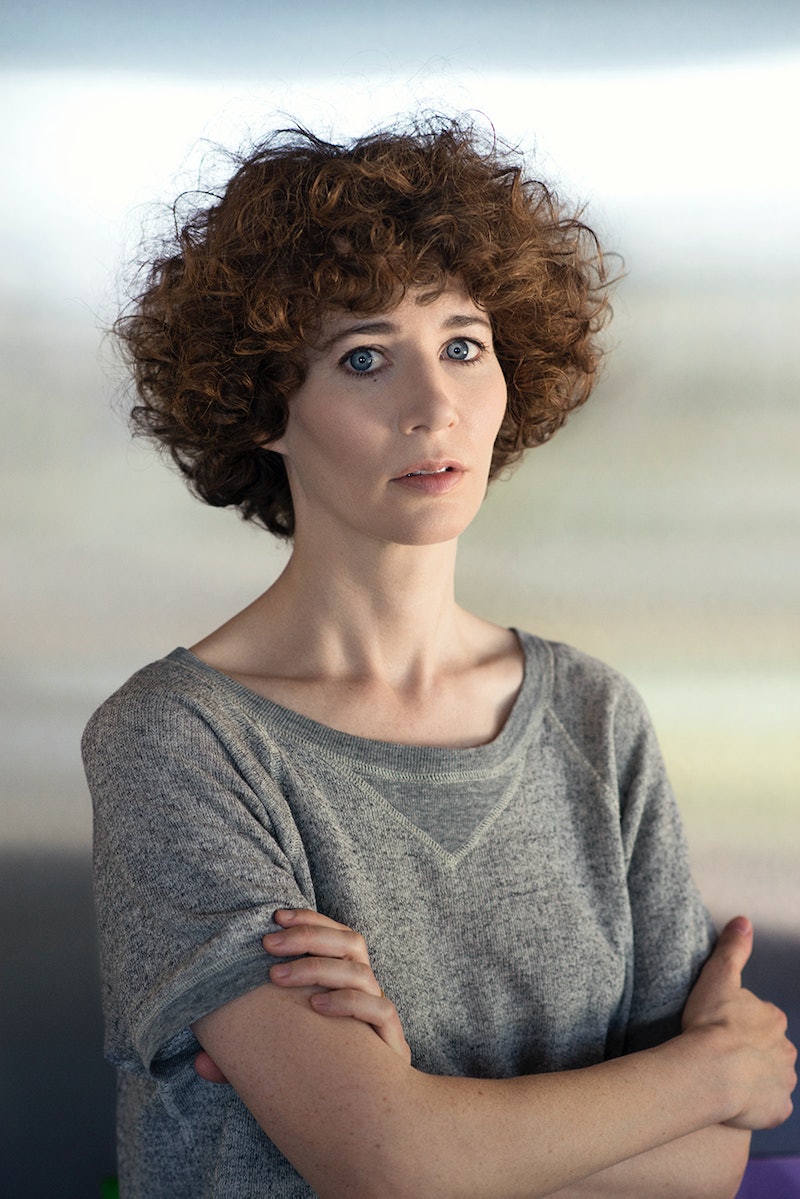 In the opening paragraph of Miranda July's debut novel The First Bad Man (Scribner) our protagonist Cheryl drives to a doctor's office and feels terrific. "I drove to the doctor's office as if I was starring in a movie Philip was watching," July writes in the first sentence. Then Cheryl "strolled through the parking garage an into the elevator, pressing twelve with a casual, fun-loving finger. The kind of finger that was up for anything."

Who but July can describe a finger like that? If you're a seasoned July fan, you can hear her wavering, calm voice in your head.

Cheryl is heading to a chromotherapist, to seek treatment for her globus hystericus — she has the unending sensation of having a lump in her throat, making it difficult to swallow. She never cries; instead, the globus grows when she's emotional. Cheryl lives alone and is in love with Philip, who referred her to the doctor; he's on the board at the women's self-defense nonprofit where she works. Oh, she is also spiritually linked to the reincarnation of a baby she met when she was 6. She occasionally comes across babies with whom she feels an immense connection. She'll stare at strangers' babies, trying to assess whether or not the infant is another version of her long-lost baby friend. Cheryl is, shall we say, ripe for psychoanalysis.

July's prose is clever, sometimes to the point of tedious, but always unique. She describes Cheryl's inner life, her human needs and feelings, in a way that's at once resonant and so weird. This narrative shifts quickly and covers much emotional ground in ways that are original and fresh and impossible to forget.

I spoke with July about the work of creating her first novel, the weirdness that sets apart her voice, and Sleater-Kinney's new release.

BUSTLE: "Weird" is a word a lot of people use to describe your movies and stories. What's your understanding of weirdness?

MIRANDA JULY: I've always been called weird, even back to my days in high school. "Weird" — that's the main word people use. But I don't know — I guess I'm weird, but I don't feel weird.

But at the same time, a few days ago I was fretting about some review for the book, and my husband said, "This is a really weird book; it's totally out there, and it's great that it's out in the world, in the mainstream world!" And that is so true. Some books never get out of the house.

I guess I'm weird, but I don't feel weird.

... I guess I like the word "weird" just fine, as long as it's paired with something more emotional — then it seems accurate to me. So if someone called the book "weird and heartbreaking," that's so much better than just "weird." If it's just "weird," that's something I don't invite in, I just leave it at the door.

How does creating as a novelist differ from writing shorts or writing and directing a movie?

Writing, for me, is an act of passion. I write short stories quickly, in no or few drafts, and I'm always excited to write and read them myself and then send them to other people to read.

When I was writing this novel, I was very confused for the first nine months or so, sitting there. I finished a draft but I didn't know the process. I still liked my idea but just felt I wasn't doing right by it. So I had this draft and this idea, and it was almost like being handed raw footage for a movie, that you can endlessly reshoot — which is quite fun! Actually, "fun" is a very generous word. That's not the right word. "Considerably less torturous" is better.

So I spent three years continuously shaping and reshaping the draft, which takes a lot more faith than making movies. You're not going to see things come together for a long time.

Did you ever consider abandoning the project?

No, actually. I have definitely done that on other projects — or, not given up, but been deeply unsure. I think here, and in other work, a real love for the characters can really buoy you along. Or writing them is redemptive, in a way. Like in my last movie [2011's The Future ] things got better and better for my characters as the story progressed.

Maybe it was my generative pregnant state — I was pregnant with my son while writing this, and it's possible that affected my endurance, too.

How do you feel when people ask about the parallels between Cheryl's motherhood and your experience as a mother?

At first, while writing, I was really paranoid. I felt very protective of my son and his privacy, and I had a lot of conversations with my husband about "What if people ask me about this?" It was a process, though, of learning how to take from your own life and how to create. The story gradually moved away from being really close to me and my experience. Now I feel that the bits of myself I've left are really nice to have there, but the characters I've created are far away from me.

I think that anxiety, that paranoia [about the questions people might ask] — that was a sign that I wasn't done yet, that my life and my novel weren't separate enough. Now, I feel like anyone can ask me whatever they want. My son's over there in preschool; there's no way he's a part of this. That washes away that fear.

One of my favorite tropes that you do is the scene of two people meeting. In your movies and your stories, you build anticipation for two characters to meet, and then there is a powerful scene where they are finally in the same place. And your app, Somebody, is a way of bringing people together, too.

People keep commenting that the book is very cinematic ... In that final scene in the book, it is, to me, very cinematic. I can see the movie in my head. The pacing for it, the shots ... I would love to see it acted out my way.

And you're selling items from the book — those could easily be props for the set.

You're right! I've made it really easy for a set designer.

Who would you have do the soundtrack, if you made this into a movie?

I don't know — if you hadn't asked a director, the answer would be very different, because I am going over options in my head and thinking, "Oh, he's probably busy right now..." I guess it'd be easier to talk about what kind of score the movie would have. I don't even let myself think about those things, though — I go straight from the dream of casting it to receiving the Oscar for it.

Will you write another novel next, or do you want to alternate between mediums?

I generally try to alternate between writing fiction and making movies. I get anxious that if I don't write another movie now, it's like there's already been so much time between them.

And I don't know how writers write novel after novel. If I wrote another novel now, I'd be so overwhelmed comparing it to this. And creatively, I don't want to just be sitting there writing a novel. It's fun to think about casting my next project and making a movie again.

I spend a lot of my days alone. So I do a lot of the things Cheryl does — the things you do when you live alone. I eat out of the pan to save a dish.

In the book, Cheryl lives alone and is very idiosyncratic. She has a system of living that eliminates the chance of her house falling apart if she ever gets "down in the dumps." A lot of reviews have said she's depressed or anxious or has low self-esteem. But that's not how it seems to me — she just lives alone! Have you ever lived alone? What was it like?

Before I met my husband, I always lived alone. It's so funny, someone just said in an interview, "I get the impression that you were single for a long time before you met your husband." And I was like, "No, I lived alone, but I wasn't always single."

It still feels weird to realize I've been married for 10 years. It doesn't feel real, in a way. Like, "Oh, we're normal, and we're happy, and we have real furniture!"

But Cheryl, yes, lives alone, and I spend a lot of my days alone. So I do a lot of the things Cheryl does — the things you do when you live alone. I eat out of the pan to save a dish. I wasn't trying to make fun of her or anything; I think she's someone that has been depressed before and has systems in place to prevent those episodes from happening again. And I think she has a certain pride about the whole set-up.

What's the best feedback a reader could give you about this book?

You mean the nicest thing, or...

The thing that would you make you feel the most successful.

My friend told me, "I laughed and I cried." And it's simple, but wow! I feel like it's a huge accomplishment if I can make a reader move between those poles. You can't fake that. She wasn't saying that to be nice, or as a favor to me. I'd rather hear that than, "It's really good." That makes me feel like, "Should I be putting you through a lie detector test?"

What kind of creative environment do you work best in?

I work mostly here in my house, in a room with the windows covered; it's not very inspiring, but I don't want anyone to see me. We have a house in the mountains, with a really beautiful view of the forest from a window, and it's actually very inspiring. I'm so internal that I never think twice about my office at home — being in a windowless cave is fine by me. But I do actually get very good ideas when I'm in the mountains.

I'm so internal that I never think twice about my office at home — being in a windowless cave is fine by me.

Well, I was just listening to "No Cities to Love," and I thought to myself, "That's such a good song."

More like this
Annie Lord’s Memoir Will Make You Believe In Love Again
By Shahed Ezaydi
16 Novels That Paint A Realistic Portrait Of Abortion
By K.W. Colyard
Aesop's Queer Library Is Open
By Tomi Otekunrin
5 Gripping Books To Read From Women’s Prize For Fiction Winner Ruth Ozeki
By El Hunt
Get Even More From Bustle — Sign Up For The Newsletter