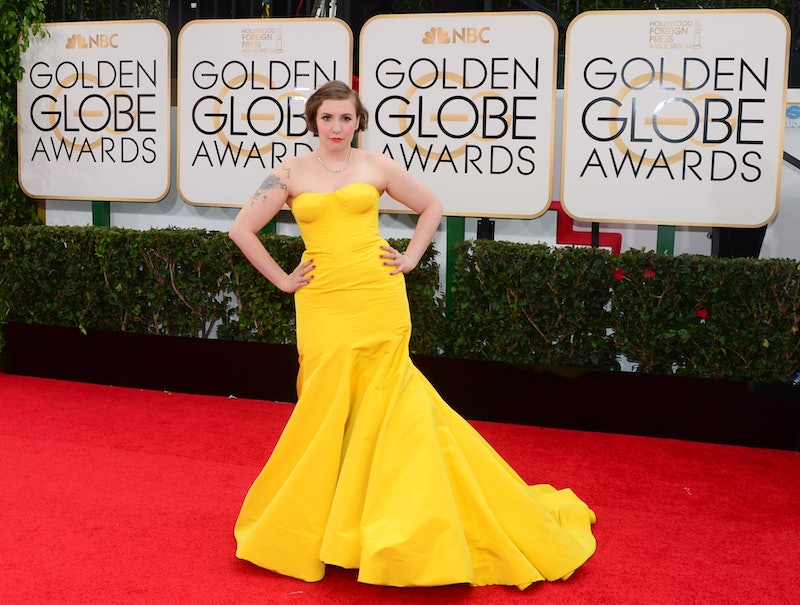 When Lena Dunham and Taylor Swift first started hanging out, I was thrilled for a number of reasons. First of all, I am an unadulterated fangirl for both women and everything they stand for, and the thought of two of my favorite people becoming BFFs was the best news ever, especially because of what it would mean for my Instagram feed. Second of all, I couldn't believe that it hadn't happened sooner. After all, Lena Dunham and Taylor Swift have so much in common. I know it's hard to tell from the surface: Dunham is on TV (and the occasional indie movie), while Swift is strictly music, and Swift's words aren't nearly as controversial as the ones Dunham pens for Girls from week to week. But basically, they're working to be the best voices they can be for today's women (teenagers included), and they're both succeeding like the badasses they are.

This became even more obvious to me while reading Dunham's latest interview in Time Out New York, where she sat down with Girls showrunner and friend Jenni Konner and made a point to bring up Swift in her interview. OK, so the whole article is amazing (especially if you're already a Dunham fan) but the part where she discusses Swift really stuck out to me. In fact, this entire interview is basically a flashing neon sign that says "Taylor and Lena are the same people!" and that's a concept that's really exciting to me.

They're both criticized for a good cause.

During the interview, Konner brought up the fact that Swift is often criticized for singing too much about heartbreak and romance, but if she wants to relate to and help her female, largely teen fan base, that is the way to do it. I can speak from experience when I say that Swift's music has helped me through more than one tough situation — and just as she's done that for me, Dunham has too.

I am so thankful to have had Hannah Horvath and her friends as I navigated post-college life for the first time. What they went through were things I was going through, and I didn't feel alone. I feel the same when I listen to Swift.

Dunham and Swift both "get naked."

There are few times I disagree with Lena Dunham, but this is one of them. In her interview, she said this:

Well, I mean, her image is as a woman in control and as a woman in power, but it’s also somewhat clean-cut, like the opposite of getting naked on television. She’s one of the pop artists who noticeably isn’t trafficking in her own sexuality.

Here's the thing, though — Swift and Dunham both get naked in their own way. Swift's lyrics are as stripped down emotionally as music can get. Dunham may be showing off the truth about her body, but Swift's way of being naked is showing off things personal to her in a completely different way.

They both make people uncomfortable.

A theory I have about Girls and Dunham in general? When people criticize or don't like it, I think it's because it hits a little too close to home. Dunham's characters aren't very likable 100 percent of the time, but can I identify with them in my worst moments? Absolutely. She exposes the reality I think we need to be exposed to more often in the media: The sloppy, awkward side of sex, what real bodies actually look like, and the complexity of female friendships and trying to find yourself when you also really need to pay the bills. Swift does the same thing. Her raw honesty draws people in the same way it turns people against her. Don't like Taylor Swift? Maybe her lyrics are a bit too real for you.

If I was going to nominate a pair of feminist superheroes, these would be the two I'd pick. Please, can we make that a thing?

More like this
The Ticketmaster Senate Hearing & Taylor Swift Tickets Debacle, Explained
By Jake Viswanath
Taylor Swift Visited The 'Glee' Set For This Bizarre Season 5 Episode
By Grace Wehniainen
Twitter Is In Awe Of Taylor Swift’s “Lavender Haze” Music Video
By Jake Viswanath
Watch Kelly Clarkson Sing A Taylor Swift Breakup Song About A Toxic Relationship
By Alyssa Lapid
Get Even More From Bustle — Sign Up For The Newsletter
From hair trends to relationship advice, our daily newsletter has everything you need to sound like a person who’s on TikTok, even if you aren’t.