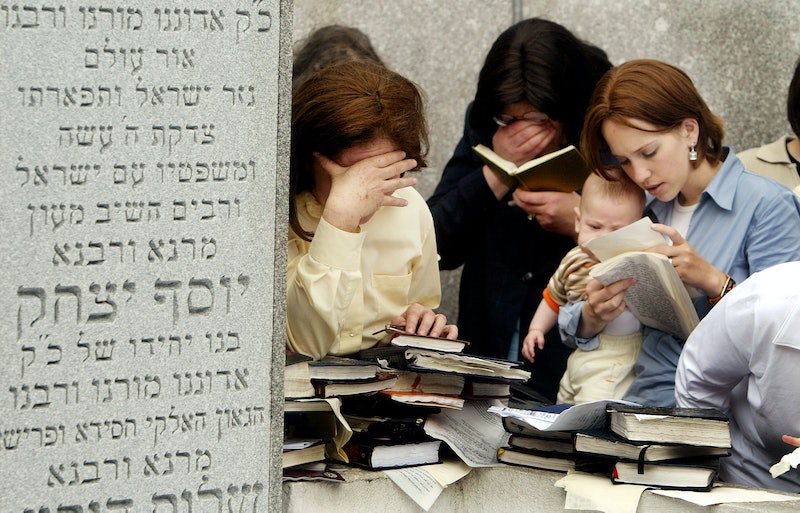 Despite recent steps toward increased equality for women within the Orthodox Jewish community, in many respects, women are still far from equal. In December, this became particularly clear during the sex abuse trial and conviction of Nechemya Weberman, a prominent rabbi and unlicensed therapist within the "Satmar" Orthodox Jewish community. The community sided with Weberman and labelled his victim a "whore" for testifying at length about the abuse she suffered between the ages of 12 and 15, after her parents sent her for "counseling" sessions with Weberman. Ultimately, Weberman was found guilty of 59 counts of sexual abuse and was sentenced in January 2013 to 103 years in prison.

The victim of the abuse, whose name and identity is protected, was taken by her parents to meet with Weberman when her manner of dress and her flirtation with boys went against the community's modesty standards for young women. She testified at his trial for 15 hours, and recalled being raped and forced to perform oral sex during years of "counseling" sessions. The victim cried on the stand, and recalled wishing she was dead. Much of her community sided with Weberman, with one rabbi saying in a public address: "A Jewish daughter has descended so low, terrible," and labeling her a "whore."

Journalist Allison Yarrow's new book The Devil of Williamsburg narrates the events in the community leading up to the trial, and reveals how community norms kept the abuse under wraps. Bustle interviewed Yarrow about the case, and what it can illustrate about slut-shaming during sex-abuse trials:

Did this story have any personal significance to you?

It did. I was raised in a small but robust and engaged Conservative Jewish community in Macon, Georgia, so Jewish identity has always been a question that I’ve wrestled with, and enjoyed wrestling with. It’s very uncommon for sex abuse victims to take their abusers to court at all, and the victim in this case not only decided to take her abuser to court, but had to go up against some very powerful and dangerous people and risk everything she knew and loved to see her abuser brought to justice.

In addition, it is also a universal story we’re starting to see over and over again. It's the story of large and powerful institutions being places where abusers can ingratiate themselves, can secure proximity to young children, and can abuse them pretty boldly — and for a long time. The abusers are often protected by the power and influence of these institutions. It's something we’ve now seen repeatedly — at the Catholic Church, Penn State, and Yeshiva University.

Since the case has been sealed to protect the victim’s identity, it’s hard to find out what actually happened during the trial. What kind of arguments did Weberman's defense attorneys make?

Slut-shaming is almost implicit in every defense when there’s a victim of sex abuse [in question]. One strategy that the defense — something I found almost laughable — was that they vacillated between her maiden name and her married name, presumably to make the point that this woman is now married, and that the abuse took place not long before she was married. It really felt like a judgment. And when she was on the stand, the defense focused on a former boyfriend of hers, who was a friend of her current husband, to sort of paint her as someone who dated one man a couple months ago, and is now married to another man. The undertone was “she’s a slut.”

What do you think it would take for society to declare that kind of questioning to be inadmissible in a rape trial?

I think what’s so insidious about this line of questioning is that it’s pretty subtle. It’s not such a blatant or flagrant violation, it’s really just character-building, and so I really don’t see how you can avoid it. The thing that I think is frightening to so many victims of sexual abuse is that the second they decide to take their abusers to court, their character is on the stand.

And I just don’t see how that could change. I think what needs to change is instead our perception of women as sexual beings. There needs to be greater acceptance that women are sexual beings, and that doesn’t mean they are sluts. Women have sexual identities and I think the more comfortable we are with female sexual identity, the less a slut-shaming line of questioning in a defense will work.

What do you think society or concerned individuals can do to create more awareness of this abuse and prevent it in the future?

I think a lot of people believe that sex education is the key to this. Children in the Satmar community don’t have access to sex education. They often don't even learn about what sex is until they're about to get married. The victim in this case didn’t know that she was being raped and violated, and didn’t know that being touched without her consent was a crime. And if you don't know what’s being done to you is a crime you can’t fight it. So I think it would start with that — what’s good touch, what’s bad touch.

In terms of policy, there are groups that support the idea of extending the statute of limitations on when survivors can take their abusers to court. And some people advocate for absolutely no statute of limitations whatsoever. Psychologists say that often when children are abused they can’t really come to terms with it and do anything about it until 6 to 8 years after the abuse.

Did you get a sense that Weberman actually believed what he was doing was good?

Not only did he not acknowledge that what he had done was wrong, he seemed incredibly smug in court. He said, “I was trying to help her and I can’t help her with all of you breathing down my back.” It was really awkward. But it was interesting to see him at the trial and then see him at the sentencing, because it looked as though there were two different people who showed up. He looked much more afraid at the sentencing. I think it had sunk in. It seemed to me, and I think it seemed to many people who witnessed the trial, that Weberman during the trial did not think he belonged on trial and did not think he’d be convicted in a trial. He was offered a plea bargain that he decided not to take, which is why they ended up in court in the first place.

Do you know what the original plea bargain was for?

He couldn’t have pleaded guilty in any case. Satmar would not have let him plead guilty. Even if he wanted to, he would’t have been allowed to because it would have been a mark on Satmar.

So did it come out that there was a code of silence in the community about the abuse, like a “no snitch” policy?

Absolutely, there is totally a “no snitch” policy. Snitches within that community are called a "moser," and it’s a really derogatory term. You don’t want to be a "moser."

What do you think of the Satmar community’s argument for handling these kinds of complaints internally rather than by outside authorities?

It’s a sound argument. I heard a really compelling story from a young man from the Upstate New York Satmar community who attended the Weberman trial, and he told me that he was abused as a child and instead of prosecuting his abuser he went to his father, and his father went to the rabbi, and the rabbi banished the guy from the community after doing some of his own investigations. And then the young man got help from psychologists who were not part of the Satmar community. And he feels this was the optimal way to deal with what happened to him. And who can argue with that?

I think every scenario is different, and it should be victim-led. Victims should be able to determine what they want to see happen and should pursue what they’re comfortable with. I don’t think anybody would encourage every victim to take every abuser to court. It’s not the right decision for everyone. But when the culture of the Orthodox community gets in the way of justice being done, it's incredibly dangerous and it's bad for everybody. Satmar can’t internally police itself and be its own court system, and neither can any other religious group.

More like this
The Most Powerful Photos From The Weekend’s Abortion Rights Protests
By Melanie Mignucci
34 Quotes That'll Inspire You On Juneteenth & Beyond
By Syeda Khaula Saad and Siena Gagliano
How To Fight For Reproductive Rights, Based On How Much Time You Have
By Courtney Young
13 Summer Solstice Quotes To Celebrate The Longest Day Of The Year
By Sadie Trombetta
Get Even More From Bustle — Sign Up For The Newsletter