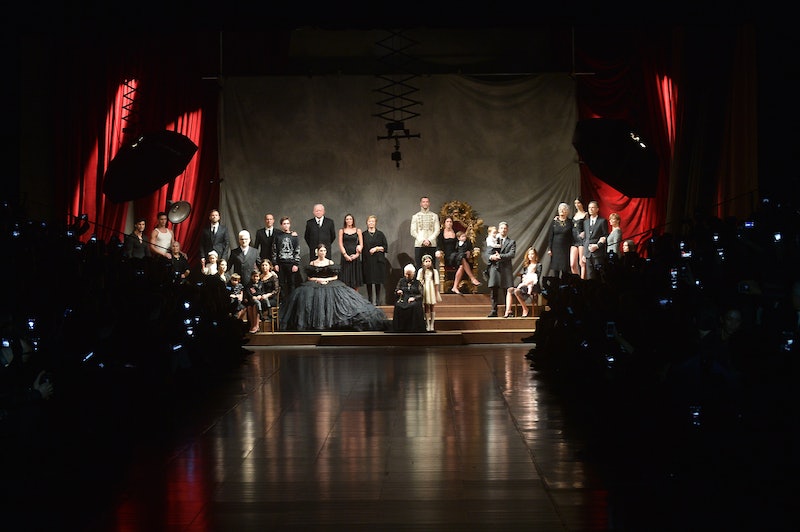 Upon viewing the following photo, you may experience a confusing mixture of amusement, intimidation, and desire to be re-born into a family other than the one you're currently in. The Dolce & Gabbana FW 2015 menswear show went down yesterday in Milan, and opened with a hilariously austere family portrait of the creative director's loved ones. They're almost as coolly indifferent as Solange's wedding party. Key word is almost.

On Saturday afternoon, the kings of opulence showed a bevy of fittingly glitzy menswear looks at their Pitti Uomo show. Some of the highlights from the show include: a cute little cardigan emblazoned with bees; numerous sweaters festooned with rococo-style gold framed Renaissance pictures; a brocade 3-piece suit sit for the dandiest of dandies; shirts screen-printed with early 20th Century family portraits. At the beginning of the show, the curtains opened on numerous friends and colleagues of Domenico Dolce and Stefano Gabbana seated in the style of a late 19th Century Italian family portrait. They say you can't pick your family, but in this case, you can.

Everyone is clad in black or white, giving the picture the air of an old photo. Multiple generations make up the assemblage, from grandmothers, to babies, to disaffected teens and everyone in between. The end product is nothing short of hysterical in its seriousness. Somehow, it's still totally magnificent.

It's like the high fashion version of the Addams family. Nay, it's a far classier version of a Kardashian Christmas Card. Whatever it is, I want a framed print of it that I can attempt to pass off as my own family portrait to everyone I know.