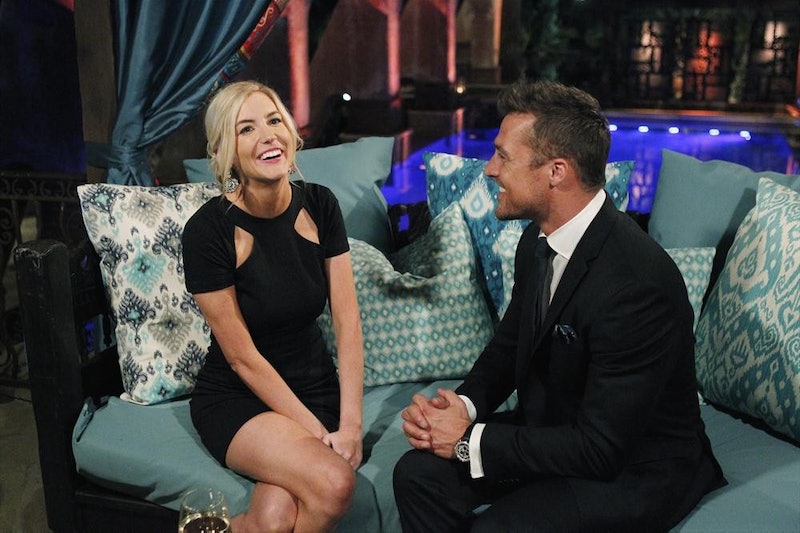 This week, there was wine tasting and wedding crashing on ABC’s The Bachelor and those two things have never looked so good, except for the fact that it’s probably not as real as you think it may be. If I was getting married and two ridiculously attractive people showed up with cameras in tow, I am pretty sure I would notice. Bachelor Chris Soules and Whitney Bischoff crashed a wedding for TV and while it’s fun, it’s really not that spontaneous. Kudos to The Bachelor producers for their efforts to make it seem kind of real though.

Chris and Whitney are sharing a wonderfully romantic day in beautiful wine country when they stumble upon a wedding in progress and spontaneously decide to crash it. Posing as friends of the bride, the daring couple dance and mingle with the unsuspecting wedding guests. But will Whitney get a rose or will their ruse be discovered and get them kicked out?

Now, I'm not here to call Bachelor fans out for not knowing the ins and outs of production — I used to work in production in Los Angeles once upon a time, so I happen to have some inside knowledge. I learned a lot about the filming process and one thing that I did learn was that you can’t just bring cameras into a private location or event without permission (or a permit that allows you to do so). So Chris and Whitney and the camera crew had to get the “OK” from someone to go into the wedding and "crash" it. That’s the beauty of editing though, you'd never know that while watching the show.

Update: ABC exec Robert Mills has stated on Twitter that the wedding crashing was not staged:

However, it does seem pretty out there.

Earlier: But because I'm not about to depend on just my own experience, I decided to call up three people who still work in production in Los Angeles and who have been in the production world for many years just to get their opinions on the situation:

Source A, a production coordinator, basically confirmed what I said earlier:

If they just walked in they would open themselves up to liability, which an ABC show would never allow. It would have to be ‘staged reality.’ The couple would need to approve it (and I imagine they would get paid). They would be dumb not to collect a fee. You would probably also have a limit on what you could shoot and for how long. It people’s faces would be recognized on camera you would need them to sign non-disclosure agreements or a standard appearance release instead. If they don’t sign, just avoid showing their face on camera.

Source B, a branded web series producer, actually came up with a way around everything — though it seems super sketchy:

In order to show peoples faces at the wedding, they would need to get people to sign releases…you can’t just shoot people and put it on TV without permission. They could have gotten permission afterwards I suppose, but that’s a bit unlikely.

Source C, a video editor, also said that it’s unlikely that an actual "crash" was possible:

If they got permits without the wedding knowing, I’m sure it’s possible but I bet it would be insanely difficult because the logistics of filming a wedding crash would be insane. It would also be hard to get enough coverage of an event to make sense in the edit process, work that would be easier if people already knew a camera crew was supposed to be there.

I feel like I just told you all that Santa isn't real, so I am sorry if I just ruined reality TV, but they probably were being as spontaneous as they could be. They saw the wedding and asked the producers if they could go and the producers went and talked to people inside the wedding, they agreed and that’s how it went down.