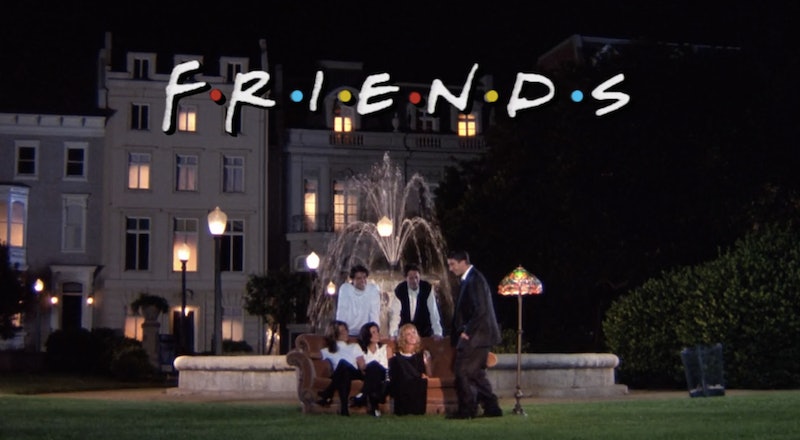 Like most people with a Netflix password, I've been spent 2015 holed up in my apartment watching episode after episode of Friends . The only thing different about my viewing of Friends is that I have never seen the show before, but like most, I've become obsessed with it. Case in point: A taxi I was in drove by Grove and Bedford Streets the other day, and I almost passed out at the thought of being within the same vicinity of the Friends (exterior) apartment. Visiting the Friends haunts isn't a new concept. Last year, Central Perk opened up, giving fans an opportunity to vie for a spot on the Friends couch. But there was one location that particularly intrigued me: Where is that water fountain in the Friends opening credits?

Being a resident of New York, I assumed I could wander the city and stumble upon the fountain somewhere in the Washington Square Park area, which is the area in which that the gang lived. I assumed the water fountain was a tourist trap, much like Carrie's Sex and the City apartment on the Upper East Side, or Katz's Delicatessen of When Harry Met Sally fame. Well, there is a reason people tell you to not assume things; this water fountain really played me the fool. After a little research I've learned one thing: The opening credits of Friends is a lie, because this fountain is not only not in Washington Square Park... it's not in New York.

It's a pretty iconic image, paired with a pretty iconic song. The Friends credits is one of those credits that I choose to watch each time I watch an episode of the show. I don't fast-forward, I don't leave the room. I watch it, because it looks like they're having a hell of a time in a New York water fountain, right? WRONG.

It's actually kind of sad the level of deceit this water fountain has caused, because if you Google Image search Friends water fountain, you're greeted with a handful of happy Friends fans who think they're taking a photo by the water fountain used for the opening credits, but they're really just taking a picture in front of a water fountain that probably contains a lot of water-borne diseases. Sorry, pals, but if I can't live in the dream of that water fountain existing in New York, neither can you!

Here are some photos of people who think they've found the real Friends fountain, but really are just standing in front your average NYC fountain. Oof.

So where does it really exist? Well, the Friends opening credits water fountain is actually located in Burbank, Calif., on Warner Brothers' Ranch... just a stone's throw away from other sitcom houses that fooled unsuspecting fans. If you do a 180, and look away from the fountain, you know what you'll see? Corporate buildings, mountains, and fake suburban set homes.

So here's a PSA: If you're visiting New York, don't go to Central Park and take a photo by the first circular fountain you see (many people think the Cherry Hill Fountain is the Friends fountain... again, it isn't.). Actually, nothing is stopping you from taking a picture of it, but I just don't want you to be hurt the same way I've been hurt by this news.

More like this
24 Years Ago, 'Friends' Dropped Its Most Underrated Ross & Rachel Episode
By Grace Wehniainen
'The Ex-Wife’s First Look Pics Are Giving 'Gone Girl' Vibes
By Bustle UK
What Reporting On The UK’s Most Prolific Cyber Stalker Taught Me
By Sirin Kale
These 25 International Horror Movies On Netflix Prove Fear Is A Universal Language
By Bustle Editors
Get Even More From Bustle — Sign Up For The Newsletter