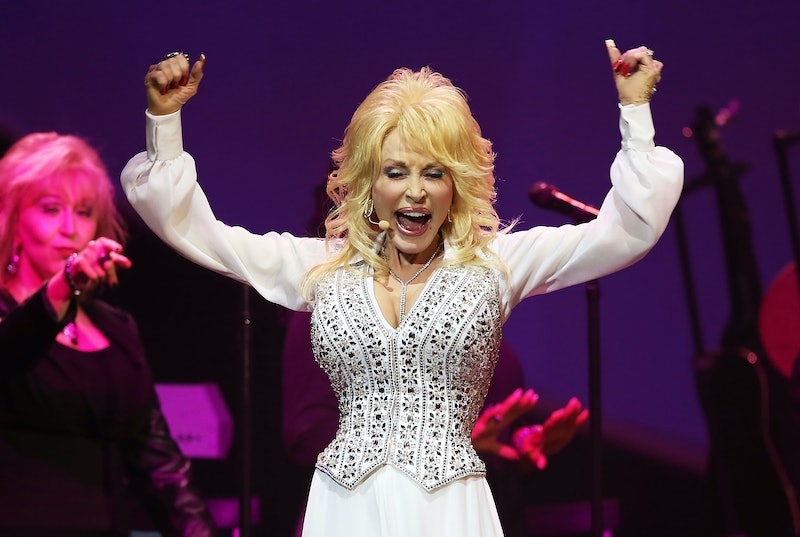 When you think of Dolly Parton, what do you think of? Her hauntingly beautiful song "Jolene?" The theme park bearing her name and likeness? Or blonde hair teased sky-high; the tightest clothes one's body can possibly manage; and rhinestones, glitter, and other forms of shimmer?

No one can deny that Parton has accomplished an incredible amount in her work: She's won Grammys, been nominated for Oscars, and is the head of a $100 million entertainment empire. I mean, she's 69 years old today and just last year she killed it in her headlining spot at Glastonbury, attracting bigger audiences than the contemporary indie bands co-headlining the festival. However, I'm also grateful that one of Parton's most enduring legacies is her completely OTT, hyperfeminine fashion ethos. Whether you like it or not, Dolly Parton is sort of a feminist icon now. I think this is so obvious in the way that Parton dresses and has carefully crafted her look over the years. There are certainly some people who would argue that applying a face of plentiful makeup and heavy-handed hair styling, along with an admitted adoration of plastic surgery, don't necessarily equate to Parton as a subversive role model. But au contraire, haters. I argue that Parton's aggressive self-acceptance and the joy that she takes in the way she looks — and the ownership and transparency about what that requires — is a subversive act toward the way that women are expected to behave. Instead of being modest or downplaying the work it takes to create her look, she totally owns it and even laughs at it. As she famously said: "It costs a lot of money to look this cheap." She made it to the top her way and is going to look however she wants whilst she's there.

So in celebration of that attitude and her general excellence, here are some of Dolly's best looks from years past:

The big ol' curls, the full skirt — this is straight out of Nashville, fit for a night at the Grand Opry. Romantic and understated, this is not the Dolly most of us are used to; but she's gorgeous as ever.

She's starting to show us a little more of her glam side with these embellished jumpsuits, bright colors, and lipstick. Her winning grin hasn't changed a bit since these photos were taken.

Parton started to gain her sex symbol status with her dramatic, cleavage-bearing dresses and sexy lingerie looks in the muscial The Best Little Whorehouse in Texas. Naturally, she had to cover Playboy in the iconic bunny ears.

This film, a revenge fantasy for women with misogynist bosses everywhere, was about women banding together to get justice: And Dolly's perm, duh. The soft, flowy 70s looks actually suit Dolly so well!

The role of "the closer the hair, the higher to God" hairdresser Truvy in the tearjerker Steel Magnolias suited Dolly brilliantly. Her costuming embraced her small town roots, but never lost any of her signature glamour.

This look is probably peak Dolly saturation: The mountains of hair! That embellished dress! I wish Designing Women was still on TV and I wish I had a guardian angel like Parton's character, Charlene — if only to teach me how to tease my hair.

Three words for you: ALL. RHINESTONE. EVERYTHING.