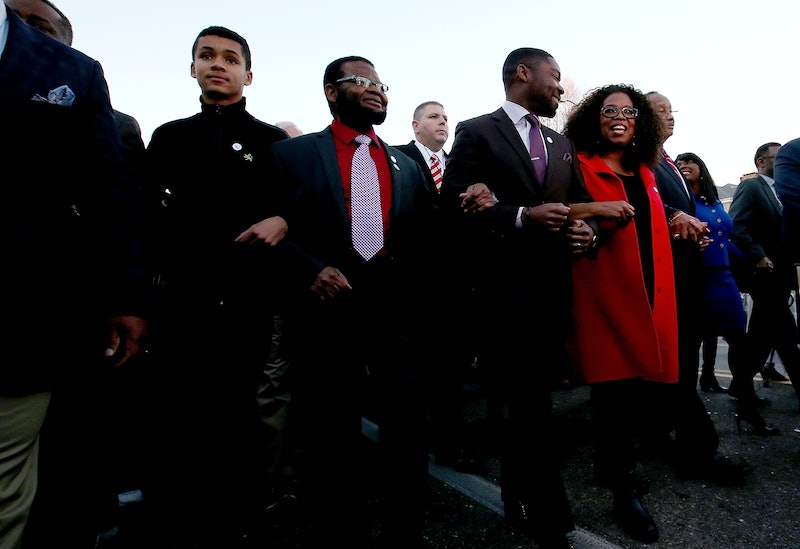 There's an uncomfortable truth surrounding Ava DuVernay's Selma, which was snubbed in the Oscars nominations when none of the actors nor the director herself were nominated in individual categories. On Monday, E! reported that at the Critics Choice Awards, Lorraine Toussant, who plays Amelia Boynton in the film, said, of the lack of recognition of Selma in Hollywood: "Come on already!" Toussant touches on what's so frustrating about the diversification of Hollywood: it's moving at a snail's pace. And that creeping progress is especially poignant this Monday on Martin Luther King, Jr. Day, when we're reminded across all mediums that, to use an oft-repeated phrase, we have a long way to go.

I'm glad we're in the room and we're on the carpet because that's how change happens. Sometimes it's slower than we'd like, but you know what, it's happening... Come on already! We are America. This is Hollywood. We really are the leaders of this medium and this medium is powerful. It could change minds and it can change hearts. You must be more responsible with the films that you make and the faces you put out there. All white films no longer reflect the face of this world. Let's get on with it, shall we?

Toussant touches on a crucial point: that Hollywood does not exist in a vacuum, and there's more than a little truth in the aphorism that life imitates art imitates life. If the faces on our screen represent only one kind of human experience, the influence of film on the public will skew our reality. Selma is not only a moving work of art, but a personal act of courage on the parts of the director, actors and musicians involved in the film. It was also a political and timely act on the part of the cast, who extend their mission of telling the important history of the Civil Rights Movement into real life. On Sunday, stars Oprah, David Oyelowo and more from Selma marched in Alabama to honor King's memory.

This intersection of film and history magnifies just how discouraging it is that Selma was largely looked over this awards season. Toussant's statement about the responsibility of filmmaking rings true: it's no coincidence that an atmosphere of persistent racial inequality is reflected in the nominees honored by Hollywood.

Carmen Ejogo, the actress who plays Coretta Scott King, was also frustrated by the stilted pace of representation and equality in the film industry. "There are has to be more diversity going forward," she said. "I think it keeps the Academy relevant if they keep up to speed in that way." Film can not only reflect the world it represents, but, by displaying tolerance and highlighting inequality, film can also influence the world.