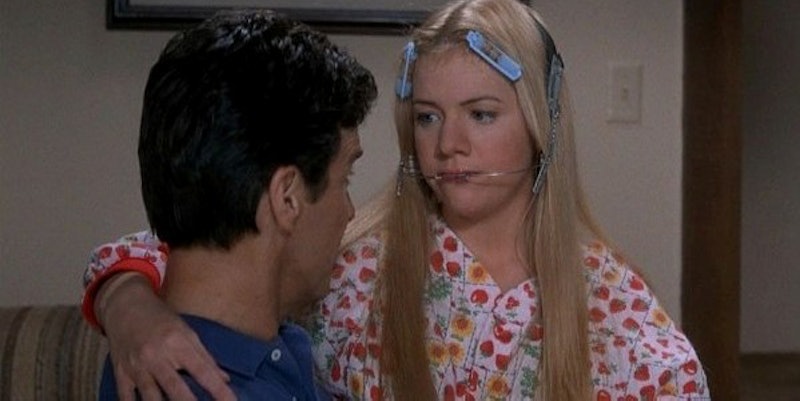 Every once in a while, in every Internet addict's life, a meme comes along that defies your understanding of how Tumblr, Reddit, and Imgur work. It just appears and takes over and, should you be the lone browser who doesn't understand said meme, you may come to know the wrath of meme-ophiles. The latest meme to end all memes comes from a 20-year-old comedy that recently became available on Netflix, A Very Brady Sequel, and we are now living in the age of "Sure, Jan." The meme refers to Marcia's harsh shade thrown at Jan when she tries to tell Marcia about her new groovy (and totally made-up) boyfriend George... George Glass. It has already been dubbed the new, "Bye, Felicia" by Tumblr, so you know it's big.

Along with the critical side-eye in "Sure, Jan" the meme also refers to the important use of "sküle" and understanding that George Glass doesn't even attend said sküle. The beauty of the meme is not only its obscurity, but its seemingly unending uses. Whether you're a total Marcia or a total Jan, you'll find the right use of "Sure, Jan", George Glass, or sküle, trust me. Before we dive into the many incredible ways the Internet has responded to "Sure, Jan," let's take a look at the clip from which the whole thing was born.

And if you think you're above this meme:

Now let's see some of the very best of "Sure, Jan."

Taking The Meme to Sküle

The Avengers Get Into It

"Sure, Jan", According to the Stars

Jumping in on the Sherlock Fandom

It just has so many applications! THE PERFECT MEME.

Reminding Us All of this Brilliant Bridesmaids Moment

Just another reason to love this movie more than you already do. Well done, you brilliant Tumblr user, you.

It Even Has Glorious Mean Girls Relevance

The Internet is a wondrous place.

Even Denny's Knows What's Up

How badly do you want one of those right now?

When My Friend Tells Me That Kale Smoothie Tastes Delicious

When My Ex Asks Me How I'm Doing

It's the meme that keeps on giving.