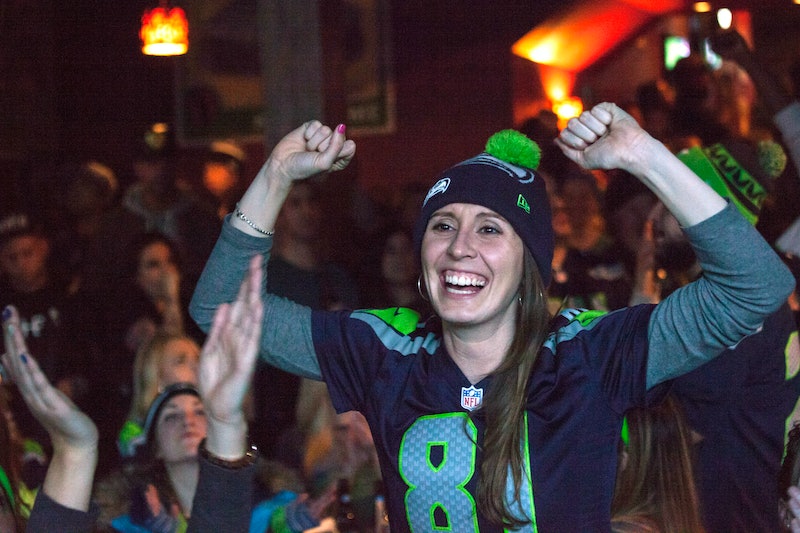 Whether you’re a football fan or not, it’s hard to avoid pre-Super Bowl hype. But why would you want to? Super Bowl Sunday brings a lot to the table beyond the delicious finger foods. There are the parties, the commercials, and of course, the half-time show. It’s not just a game; it’s an experience. And yes, the game… this year will be a battle between the defending champions, the Seattle Seahawks, and the always competitive New England Patriots, back for their fourth time in 10 years.

Unless you’re one of the fans frantically trying to book a ticket to Arizona, you could sit back, relax, and ponder Katy Perry’s set list while you wait for February 1 to arrive. But again, why would you want to? There’s no reason to limit your Super Bowl fun to just one day.

As a reader, I recommend turning to books to get in the football spirit. There’s no shortage of material on the nation’s most popular sport, and it’s not all just meant for diehard fans. You can find everything from true accounts of what goes on inside locker rooms to romance novels about fictional players fighting to win the hearts of jock-hating ladies. (Oh, and then there's that stuff that Tim Riggins wrote.)

Get ready for the big day with these 10 football books that will interest even the most casual of fans:

Tales From the Patriots Sideline: A Collection of the Greatest Stories of the Team's First 40 Years by Mike Felger

As the Patriots prepare for yet another Super Bowl, it’s the perfect time to take a look back at the team’s history. Using anecdotes from former players, Felger shows how the franchise managed to overcome years of laughably bad management and transform into a perennial powerhouse — one that cleans up just as well as its star quarterback, Tom Brady. Also interesting is that Pete Carroll, the coach of the Pats’ Super Bowl XLIX rival, makes a cameo, as he once coached on the New England sideline. How times have changed.

Win Forever: Live, Work, and Play Like a Champion by Pete N. Carroll and Yogi Roth

Written before he led the Seahawks to two straight Super Bowls — so far (oops, is my bias showing?) — Pete Carroll already had a lot to say on the subject of winning and achieving. Win Forever shares the unique philosophies that still guide his coaching. With his team the first to make back-to-back Super Bowl appearances in a decade, there’s clearly something to be learned in the pages of his book.

The Blind Side: Evolution of a Game by Michael Lewis

Even if you already saw the movie, The Blind Side is worth a read. Not only does it share the incredible story of how Michael Oher went from being mostly homeless to a first-round NFL draft pick, it examines the evolution of football and how his position became so valuable. Plus, Oher went on to win a Super Bowl, so if that’s not inspiring, I don’t know what is.

If you think football is just a game, How Football Explains America will try to convince you otherwise. To author Sal Paolantonio, it is so, so much more. As he tries to answer the question of why America loves football, he discusses everything from Manifest Destiny to Star Wars. It’s a book about a sport, but it’s also about a culture.

Boys Will Be Boys: The Glory Days and Party Nights of the Dallas Cowboys Dynasty by Jeff Pearlman

The phrase “Boys will be boys” generally bothers me, but in the case of Pearlman’s book, it’s just plain absurd. The out-of-control antics detailed in this look at the early ’90s Dallas Cowboys are too insane to be anything but true. Pearlman reveals a team perhaps even more dysfunctional than it was talented — and they were good enough to win three Super Bowls in four years. It’s somehow both appalling and enthralling.

Geared toward a younger audience, Football Genius is a fictional story about Troy White, a boy able to predict plays before they happen. When his mom gets a job doing PR for the Falcons, he is determined to use his gift to help the team. Now if only the kid could find someone to take him seriously…

When Phoebe Somerville, a woman with zero interest in sports, inherits her father’s football team (the fictional Chicago Stars), she finds out there’s a catch: the team is only hers if they make it to the Super Bowl. And dammit, she needs the money. She has to find a way to work with head coach Dan Calebow, who — naturally — is both frustrating and intriguing.

Opera singer Emily Hamilton takes on an unexpected role when she has to pretend to be gorgeous and charming NFL star Brandon McKenna’s fake fiancée. (Isn’t it the worst when that happens?) Not surprisingly, lines start to blur when feelings turn real. Super Bowl Bonus: Brandon plays for a Seattle football team, albeit a fictional one.

Something for Joey by Richard E. Peck

Peck tells the touching true story of John Cappelletti, a former NFL running back, motivated by his younger brother Joey’s fight with leukemia. As his brother battles cancer, the two draw strength from the other. Each touchdown John scores is “something for Joey”.

League of Denial: The NFL, Concussions and the Battle for Truth by Mark Fainaru-Wada and Steve Fainaru

League of Denial isn’t going to pump you up; if anything, it’s going to make the Super Bowl harder to watch. The book presents the science behind football’s risks to the brain in a compelling and digestible way, while exploring the NFL’s problematic response to the growing evidence over the years. It’s a fascinating read about an issue that football fans shouldn't ignore.