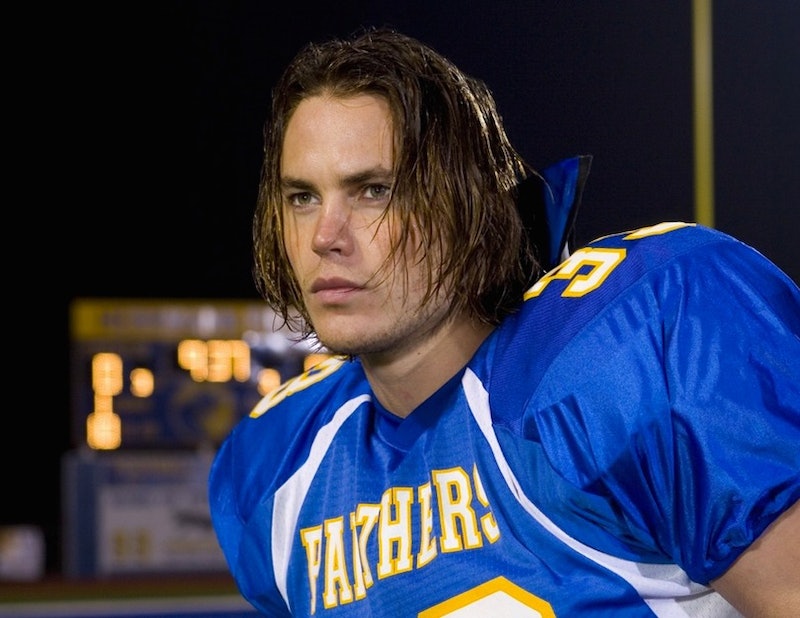 Okay, everyone can relax now. Seriously, guys, calm down. The wait is finally over: a collection of poems “by” Tim Riggins, Friday Night Lights’ most rugged stud, has arrived for your swooning pleasure. Wait — that’s not what you guys were waiting for? Okay, then. I’ll just be over here, crying/imploding into my novelty Dillon Panthers T-shirt.

The Collected Poems of Tim Riggins by Nico Alvarado, a writer/teacher/Iowa Writers’ Workshop graduate (yeah, he’s legit), is now available from non-profit publisher Hell Yes Press. Each of the poems, which range from the ecstatic (“Tim Riggins Speaks of Waterfalls”) to the experimental (“Tim Riggins Invents a New Number”), provides a fourth-wall-destroying glimpse into our favorite running back’s turbulent soul. Honestly, I’m still not sure whether this whole thing is a joke or not, but WHO CARES! Alvarado’s chapbook is a clinic in free indirect discourse that would make George Eliot proud. Kinda. And for all the [Taylor] kitschy-ness of the premise, Alvarado's poems do have a simple beauty, reminiscent of Dillon's arid rolling plains (I'd imagine).

Four of Alvarado’s poems appeared last year in Gulf Coast, the University of Houston’s literary journal, which provides further evidence against the James Franco-esque extended-joke-on-humanity-theory. But, for a mere $9.00, a physical copy of Tim Riggins’ deepest expressions can be yours to have and to hold.

Here's a selection of some of my favorite lines, paired with Riggins' stupidly perfect face in motion:

You want to know what it was like?It was like my whole life had a fever.Whole acres of me were on fire.The sun talked dirty in my ear all night.