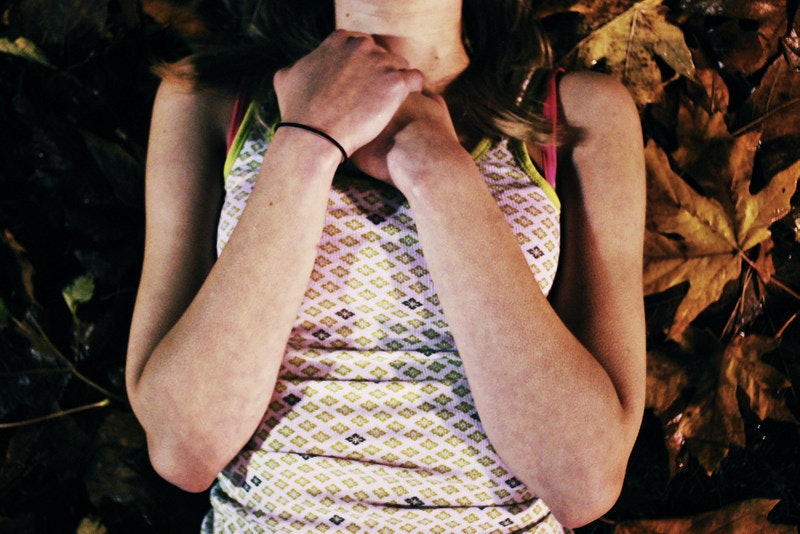 The only thing that mattered for '90s kids was possessing the last Goosebumps book by R.L. Stine. He cranked out 62 books in the original series, with every story just as glorious as the last. He took real emotions and experiences and added horror, while softening them for the delicate imaginations of children. He spoke to us through monsters, haunted masks, crazy plant hybrids, ghost neighbors, and so so much more. And I'm just gonna go ahead and say what has probably been said a million times before: R. L. was the king of the '90s.

The great thing about all of his books is that even though they are appropriate for kiddos, they're also super-fun nuggets of nostalgia for all the '90s kids who are now entering their third decade on this planet. We can still escape into his world because Mr. Stine left that emotional door wide open for us. The heart-connections to these characters never went away. And because there's such a vast catalog of Goosebumps titles, there's really a book to match our every emotion and mood. If it helps, just pretend you're back in Book-It and competing for a Pizza Hut pizza party for you and all of your closest friends.

When you're feeling frustrated

Because if only taking a picture of your annoying coworker (and having that picture mysteriously cause harm on said coworker) could get her to stop including "URGENT" in all of her email subject lines. If only.

Be Careful What You Wish For...

Pick up a copy of Be Careful What You Wish For..., because the idea of being able to have three wished granted by a witch named Clarissa will just push you over the edge into jumping-up-and-down-like-a-weirdo excited.

When you're in no mood to leave the house

Welcome to Dead House is perfect for this situation, because for the first time ever, you'll probably side with the resident zombies who just want to veg out on sustenance while avoiding sunlight.

Monster Blood is the story of a novelty slime that consumes everything within reach and turns any obstacle into a giant mess. So.... you... when you're hangry.

Piano Lessons Can Be Murder

Then Piano Lessons Can Be Murder is just what you need, because somehow R.L. Stine used his brilliant author sorcery to tell a story about a piano teacher who is a ghost with a hand fetish, and he made it into a kids book. You will be anything but bored.

When you're tired and cranky

Well first, take a nap and lose the 'tude. That's not cute on anybody over the age of three. Then you seriously have to read Don't Go to Sleep! because it's about a kid who wakes up within a whole new world of warped reality and police chases. Fun for the whole family, really.

You're head is swirling and bad ideas suddenly seem like good ideas, so it's probably the right time to breeze through Chicken, Chicken. It's about a curse put on two kids after knocking down a mysterious woman and they end up growing beaks and feathers. It'll make you question everything in a drunky sort of way that's also kind of a blast.

The Abominable Snowman of Pasadena

Then you've gotta read The Abominable Snowman of Pasadena, because there's absolutely nothing disappointing about an abominable snowman following two kids back to Southern California during the winter.

When you're feeling all the feels

The Cuckoo Clock of Doom

Then the Cuckoo Clock of Doom will bring on the water works because it's essentially a version of Groundhog Day meets It's a Wonderful Life but when a mean older brother that learns the hard way not to frame his sister for breaking sh*t.

You Can't Scare Me!

Ah, so like the girl in You Can't Scare Me!, eh? Nothing scares her, so a pair of pranksters set out to bring her a whole new level of terror by making their town's original settlers rise from the dead.

It Came From Beneath the Sink!

Maybe you have a cold and feel 100 percent disgusting. Or maybe you'r nauseated and just want the vomit to make its way out of your body. Well It Came From Beneath the Sink! will certainly conjure up the perfect amount of ICK to do the job.

Go with one of the tamer Goosebumps stores, like My Hairiest Adventure — about a boy who grows hair everywhere after using expired tanning lotion.

Why I'm Afraid of Bees

Then it may or may not be a good idea to read Why I'm Afraid of Bees. Basically about a boy that turns into what he is most afraid of — a bee. It either make everything worse, or validate what you're feeling. I dunno, just read it and see where your nerves land.

Anytime you're embarrassed, you just want to hide under a giant blanket and pillow fort with Netflix playing reruns of your favorite sitcom. Well, if you can't make it to the fort, take a few hours to live vicariously through a group of kids who have the ability to make themselves invisible.

When you're feeling sassy

Then reach for the one about the girl who is sick of being picked on and becomes a brand new person with the help of a haunted mask.