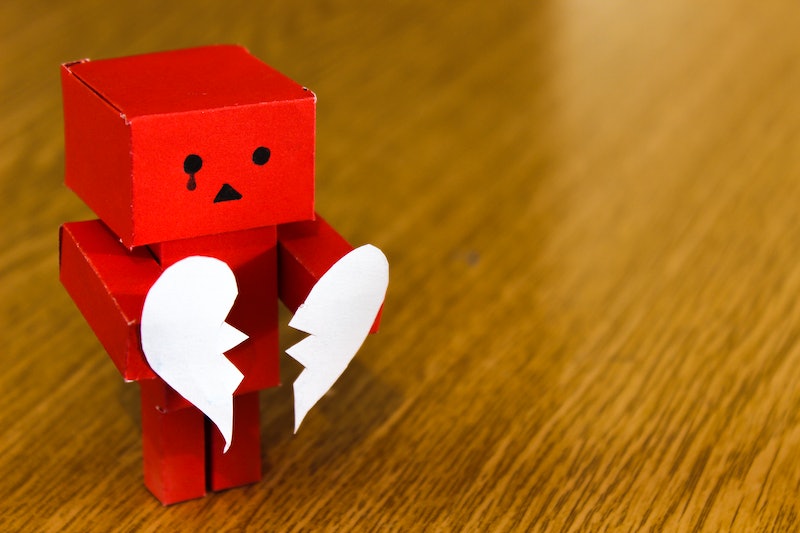 You know the feeling right after a breakup, how you’re just raw and vulnerable and the smallest thing can have you reeling, and you honestly can’t imagine a point in time where you won’t be constantly on the verge of tears? Good news: science says it takes 11 weeks to get over a breakup. Grab my figurative hand and say it with me: this feeling will not last not forever. You will get through this.

While people have long debated the length of the recovery period, a new study published in the Journal of Positive Psychology found that most people are able to bounce back from a split in three months. Researchers Gary Lewandowski and Nicole Bizzoco questioned 155 people who had been involved in a breakup in the past six months, and found that people started to feel better and develop “strong coping strategies” at around the 11-week point.

For the study, researchers gave participants a series of statements that they could agree or disagree with. Three months after the breakup, 71 percent of participants agreed with positive statements such as, “I have learned a lot about myself” and “I have grown as a person.” What’s interesting is that people reported these positive feelings, regardless of whether they were the dumper or the dumpee. So even though getting blindsided by a breakup really sucks, there's a big chance some good will come out of it.

Researchers are calling those who have made it past the 11-week mark as having “left the recovery zone,” so if anyone tries to criticize you for spending all day in bed watching Dirty Dancing even though you and your S.O. broke up over a month ago, just tell those haters that you’re still in the recovery zone and these things take time.

However, these findings might only apply to short-term relationships and not long-term ones, especially marriages. A 2013 article published in the Wall Street Journal said that you should give yourself a good two years to get over a divorce, and I know we’ve all heard the “take the time you were together, cut it in half, that’s how long you need to recover” thing (thanks, Ted Mosby).

So what gives with all the conflicting information? I'm not a scientist, but I am logical, so my best guess is this: people are different. Whoa! Crazy idea, right? My first "boyfriend" lasted two weeks, and I was upset about it for a couple months. Embarrassing, I know, but it was high school so get off my back, OK? Other people might not take as long as I did. The bottom line is, breakups are the worst. They're tough, and you don't need to make them any harder by stressing out that you're not following some pre-determined timeline correctly. So take it at your own pace. Keep the three-month mark in your mind if it helps you put things in perspective, but don't put pressure on yourself to be "healed" by then. Just do what's right for you!

And as for tips for getting over a breakup? Science has an answer for that, too. The American Psychological Association found that writing about the positive aspects of the relationship led to more positive emotions. So bust open a Word doc and a pint of Ben & Jerry's. They just came out with a new flavor, which in my professional opinion is exactly what you need to feel better.