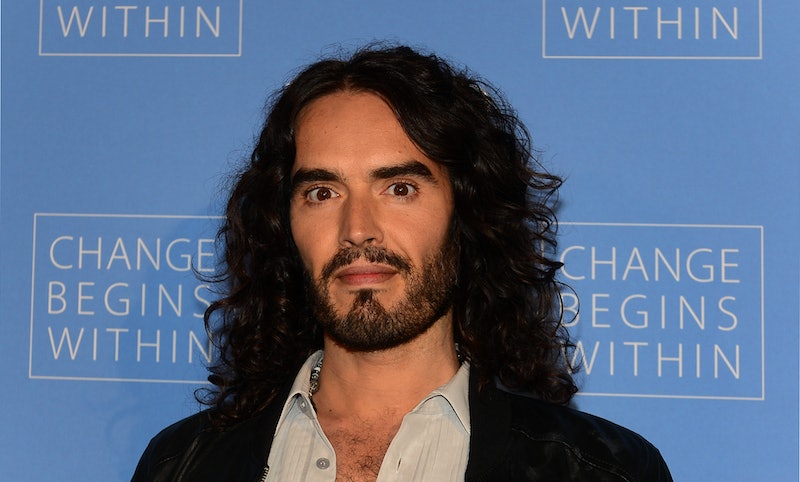 It turns out, Russell Brand found the Bruce Jenner-transitioning-to-Madeleine-Albright-photoshop disaster just as wildly offensive and baffling as you did. In a totally right-on video, Russell Brand defended Bruce Jenner over the InTouch article that features the former Olympic runner as a woman, calling the display transphobic and gross. His thoughts are pretty brilliant.

On Friday, Brand posted an episode of his web series "The Trews" in which he slams the gossip media for their reaction to InTouch's cover story on Bruce Jenner supposedly coming out as a transgender woman. You remember, the egregiously insensitive one where the magazine made a supposed "photographic re-creation" of what Jenner allegedly wanted to look like based on what insiders told them. YEESH... Yeah, I still kind of can't believe that happened.

In the nearly nine-minute video, the Get Him to the Greek actor deftly tears into the gossip media for encouraging a "climate of bullying, and judgment, and cruelty" and for vilifying trans people with this story. In an exceptionally articulate moment, Brand identifies the cultural underpinnings of this kind of journalism. "Transphobia seems to be the most recent and encouraged form of prejudice, now that racism and homophobia are not tolerated..." says Brand, winding up for his most well-stated, poignant idea... Are ya ready? Here goes:

KABOOM! That's the sound of Russell Brand's nuclear missile of truth exploding in your face. Listen to the whole thing here:

Really though, if this kind of hatred and intolerance is the legacy of the media and our culture at large, that's seriously shameful. Admittedly, this is something I never thought I would say, but I think Russell Brand could write some pretty fantastic media theory if that whole comedy thing doesn't work out.