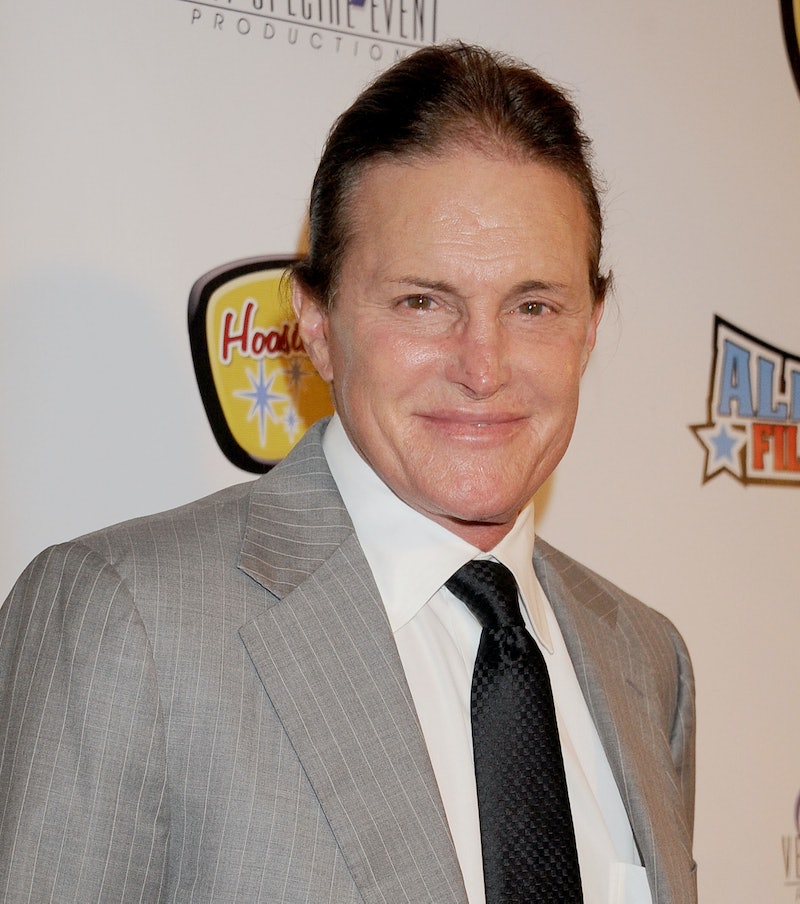 Other than the horrendously crappy photoshop job that some pathetic soul is responsible for, there are SO many offensive things about the image of an allegedly transitioning, photoshopped Bruce Jenner on the cover of InTouch . The amount of onomatopoeia I'm compelled to use to express my offense over this verges on obnoxious. But, UGH, GAHH, BLEERGH... Who thought this was OK?!?!?!?!?

The cover of this week's InTouch features Bruce Jenner's face, replete with photoshopped pink lips and rouge, pasted onto the shoulders of a woman clad in '90s corporate casual workwear. But don't worry, guys, this photo recreation is supposedly based off of "what multiple sources and insiders" revealed to the magazine about what "Bruce wants to look like when his transformation is complete" as per the cover story. So the decision to make Bruce look like an extra-dated Chicos model isn't coming totally out of nowhere, THEY SWEAR.

"Bruce's Story: My Life as a Woman" is the headline, and the story is covers how the KUWTK patriarch "will come clean about transitioning in 2015." Similar tabloid stories have been published in the past year about Jenner supposedly transitioning into presenting as a woman, which Jenner has never given any indication of, and those close to him maintain as untrue.

According to TMZ, Kris Jenner, whom Bruce separated from last year, is telling close friends that she's wildly offended by the cover, which is no wonder. Just prepare yourself, folks. You can check it out here, but be warned. This is about to be one of those moments where you're so gobsmacked by the absurdity of the media, that you may go temporarily rage blind.

Now, one can really reach and say that InTouch isn't trying to pass judgment. However, an image like this and its histrionic subtitles does pass judgment by crazily sensationalizing the "story." Even if InTouch isn't saying "Look at this shockingly freakish spectacle!" verbatim, this seems to be the subtext. Basically, they're pathologizing non-heteronormative gender identity which is something that journalists obviously shouldn't be doing.

Especially in a time when the trans community is becoming more visible in pop culture — just days ago, Jill Solloway's Transparent won big at the Golden Globe awards — this feels like a big slap in the face. Even if things are getting better little by little, we still live in a culture that privileges cisgender people and portrays everything else as other; as sideshow attractions equivalent to other poorly photoshopped tabloid cover stars like Bat Boy; as less than human. These cultural attitudes foster the kind of bullying that lead transgender people like Leelah Alcorn to believe that the world is an inhospitable place for them. If the media continues to perpetuate those ideologies, people will continue to feel that way.