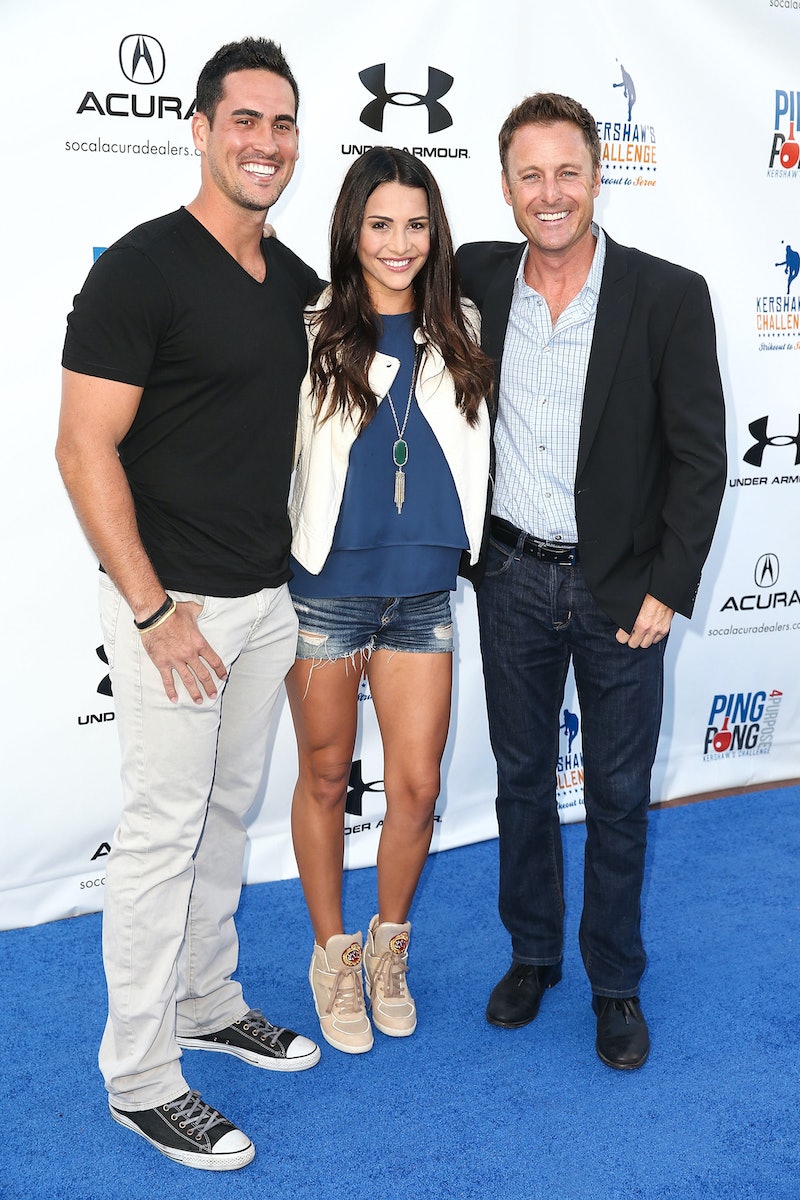 It's been barely three weeks since former The Bachelorette couple Josh Murray and Andi Dorfman dropped a major bomb on us. Just days after appearing on The Bachelor's live premiere together, Josh and Andi announced they were breaking their engagement and splitting up. I'm sorry, what? They seemed so happy, and even though I was totally rooting for Nick Viall during the show, they did seem well suited for each other. Unfortunately, like most Bachelor Nation relationships, theirs wasn't long for this world, and I'm not the only one having trouble dealing with the fact that my favorite Bachelorette couple is no longer. Bachelor host Chris Harrison is having trouble dealing with Josh and Andi's breakup too, and offered up a few words about his feelings to Ryan Seacrest this week.

"They were being a little awkward and weird," Harrison told Seacrest. "But you know, they're from Georgia. You know those people."

First of all, Harrison, I am from Georgia, and I do not know "those people." I certainly hope Seacrest gave you a piece of his mind after the interview, because I am planning a Georgia Natives Only party, and Seacrest, Andi, Josh, and I are going to have a great time without you.

The rest of the interview, though, revealed that Harrison is basically us. He's feeling shocked and "a little disappointed," and said that "I just wish they would have said something to me." Me too, Harrison. I wish they would have said something to me before I got slapped in the face with the worst news ever and was completely blindsided. But in case you're feeling the way Harrison and I are, I want you to know there is a light at the end of the tunnel. Once we get through the five stages of post-Andi and Josh grief, of course.

This is the stage where you refuse to accept that Josh and Andi are actually broken up. "These are just rumors," you think to yourself. "Josh and Andi are going strong, and someone out there (probably Perez Hilton) decided to leak a false story about the couple of the century splitting up. This can't be true. I refuse to believe it."

This is where things get painful. It begins to sink in that Andi will have to give back that beautiful Neil Lane diamond, and it makes you incredibly mad. You might even swear off watching The Bachelor or The Bachelorette ever again. It's a deep, dark anger that shakes you to your very core.

You get on Twitter and try to make a deal with the devil and Chris Harrison to turn back the clocks. You offer to find Andi in Atlanta yourself and see if you can change her mind. You consider seeking the advice of a relationship counselor to see if there's anything that can be done. What if you trade your own happy relationship to fix Andi and Josh's? This can't be the end, can it?

This stage involves a lot of tissues, tears, and DVR-ed episodes of The Bachelorette, and you're probably watching them alone. You rewind the final scene where Andi chooses Josh again and again, knowing you would do anything to feel that kind of happiness again. "True love is once in a lifetime!" you sob, until your roommate comes in and asks you to please shut up.

You take a deep breath, and you're finally able to accept the truth: Andi and Josh are broken up, and it's sad, but there are still good things in your life. Chris Soules is still looking for love, and maybe that love will last forever! There will be another season of The Bachelorette this summer, and maybe it'll have a happier ending. You smile, and are once again able to function in your daily life as a productive member of society, although you are still learning how to live with pain. See, that wasn't so hard!