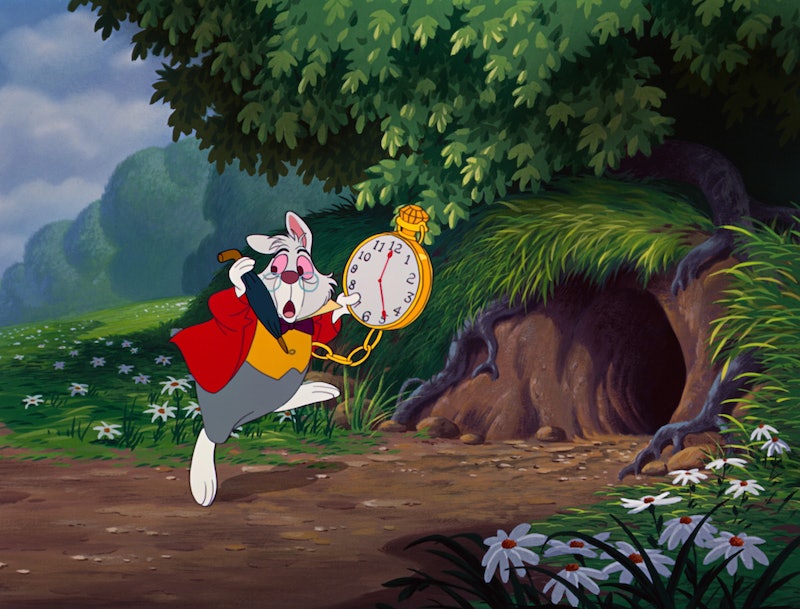 We're raised to expect our menstrual cycles to run for exactly 28 days, on the dot — so when our periods are irregular, some of us are inclined to totally freak out. Could this irregularity be caused by some rare kind of disease that we've never even heard of? And if we've recently engaged in any boner-based sexual activities, a late period can often leave us mere moments away from acting out the opening scene in Juno.

Conversely, a consistently irregular period can also leave us with worries about our own fertility. Does an irregular period mean your ovaries aren't working properly? Could you have trouble conceiving, if you decide to have a baby later on? Will you never get the chance to act out the opening scene in Juno??

About 30 percent of women experience irregular periods (sometimes also referred to as "abnormal menstruation") — which means a menstrual cycle that varies in length from month to month — at some point during their reproductively fertile years. And while sometimes irregular periods can be a sign of a serious health problem, more often, there's nothing all that abnormal about them — they can be a byproduct of stress, certain lifestyle habits, or even just a function of age.

So how can you tell a worrisome irregular period from a totally regular irregular period? It's obviously always a good idea to check with a gyno or other doctor whom you trust and who takes your opinion seriously when your body starts behaving in an unexpected way. But before you make your appointment, read on to learn a little bit more about the various causes of irregular periods.

Going Off the Pill

It's kind of ironic, since many women with irregular menstrual cycles are put on the pill to regulate them — but if you've just stopped taking birth control pills, it can take as long as six months for your body's normal menstrual cycles to return. So if you've just stopped popping your pills and can't seem to properly schedule your visits with Aunt Flo (or her daughter, Cousin Bloodyunderpants), don't panic.

If you've had irregular periods for a while, many doctors will automatically assume that you have PCOS, a very common endocrine disorder (it's estimated that 5 million American women have PCOS). Though it sounds scary — it can lead to excessive body hair growth, acne, and infertility — PCOS can be helped with a variety of treatments, including the pill and diabetes medications.

But if you're genuinely concerned that you have PCOS, ask your doctor for a full PCOS diagnosis exam, which may include blood tests and vaginal ultrasounds. Many OB/GYNs dismiss any period irregularity as PCOS, which can lead to over-medication for those who don't actually have a problem, or failing to get treatment for the real cause of your irregular periods, so a test might be a good idea.

Causes: In most cases, the cause of POI is unclear; but sometimes, the disorder is the result of a genetic or chromosomal problem, or an autoimmune disease.

Primary Ovarian Insufficiency is a serious health problem that disrupts hormone production, and effects one in 100 women under the age of 40. Sometimes incorrectly referred to as "premature menopause," POI causes your body to inconsistently produce hormones, which reveals itself in irregular periods. But the irregular periods aren't the real problem — POI can lead to bone density loss and trouble conceiving down the road, so it's important to get it treated.

But POI has a lot of other symptoms, too — like hot flashes, vaginal dryness, pain during sex, and sudden onset of irregular periods after a history of consistent periods — so don't assume that you have it just because you're irregular. And with early treatment, women with POI can still conceive and bear children — in fact, 5 to 10 percent of women with POI are still able to conceive naturally, without any medical treatment at all.

Causes: Having been born more than 10 but less than 20 years ago.

It can take several years for your periods to settle into regular cycles after you start getting them. I can tell you this because science says so, and also because I got my period at 11, and didn't have regular periods until some time in high school. Prior to that, I'd go up to six months at a time between periods (since I was not sexually active at the time, I was often hopeful that this meant that God had finally listened to my prayers and taken away my annoying-ass period). Many good pairs of panties and stonewashed Gap jeans lost their lives in the Gabrielle Moss Irregular Period Wars of 1993-5. So if you're relatively new to Periodsville, don't get hung up on the irregularities.

Causes: School; work; other human beings; sometimes, just the mere prospect of waking up and going through another day of trying to figure out what any of this all MEANS, man.

Stress is considered the most common cause of irregular periods — when you're stressed, your body floods with cortisol, which can interfere with the hormones that regulate your period. Luckily, there is an easy solution for this one — cut ties with everyone you know and start a new life selling turquoise jewelry in Taos, New Mexico. Or, also, you could try stress relief methods like yoga, exercise, or meditation. Whatever, your call.

Certain drugs designed to lessen depression or anxiety can end up causing a ton of new anxiety by giving you irregular periods. If your irregular periods began right after you started a new medication, talk to your psychiatrist — it may be a common side effect of your new pill that no one bothered to warn you about.

Causes: Losing or gaining a lot of weight, in a very short period of time.

Though there are a ton of reasons for sudden weight gain or loss — thyroid disorders, illnesses, eating disorders, intense athletic regimens — a common thread among them is that sudden changes to your weight can lead to sudden changes in your cycle, including irregular periods or not getting your period at all. The good news is that your periods will generally return to normal once you body returns to its healthy weight. But if you're not sure why you've suddenly gained or lost a lot of weight, please go check in with a doctor (if you do know why you've suddenly lost a lot of weight and it involves potentially dangerous behavior, please go check in with a doctor, too).

Causes: Pumping milk out of your boobs — possibly into a baby's mouth, possibly somewhere else... frankly, it is none of my business.

The hormone fluctuations we experience when breastfeeding can sometimes cause irregular periods, or even a total lack of period. Your cycles will probably return back to normal after you wean your kid, but some women experience permanent changes to their cycles post-childbirth, too. And the only known cure is to participate in one of the breastfeed-ins at the mall — okay, I lied. There is no treatment, I just think breastfeed-ins are really cool. Fight the power (with your boobs)!

And remember: no matter what, your irregularity still makes you a totally regular woman.