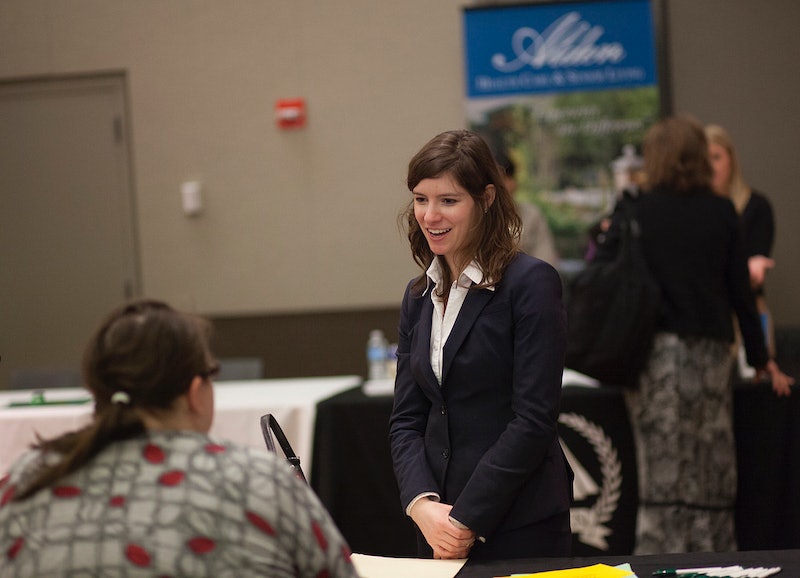 Have you ever thought you aced a job interview, only to find out later that one tiny comment you made totally blew the whole thing? We've probably all been there — but thanks to the Internet, we can also all learn from each other's mistakes about what not to say in a job interview. In fact, wouldn't you know it? An AskReddit thread popped up this morning geared specifically towards expanding our wealth of job interview know-how! How fortuitous! Or, well... kind of.

Truth be told, it's actually not a serious "How do I ace my job interview?" thread. Titled "In five words, how could you ruin a job interview?", it leans more towards the comedic; as such, a lot of the responses are clearly not things that anyone would actually think to say during a job interview (or at least, I hope they wouldn't...). Once you sort through all the "YOUR MOM!" jokes, though, there are actually quite a few nuggets of useful information; as such, I've identified a series of five-word blunders that people might realistically make, hopefully so we'll never make them again. Trust me: No matter how innocuous any of these questions or comments may seem, they're not. They're really, really not. Think of them as an extension of all those "what you say vs. how you sound" items we covered last week in that video from Fast Company.

These 10 little things? Don't ever say them in a job interview. Got any to add?

You may as well have just said, "I will come to work high all the time."

Not even in the context of a question about what your biggest weaknesses are. You will sound like Scott Pilgrim.

Why are you even at the interview if you don't want the job? Well, newsflash: Your potential employer probably doesn't want you for the job, either.

6. Don't admit to not liking something that will be integral to the job.

It's the job interview equivalent of putting "And that's why I want to work at Bank of America!" at the end of your cover letter for a job at JP Morgan Chase.

9. And don't try to negotiate your salary like this.

To be fair, salary negotiation is important. But there are ways to do it that often lead to success... and then there are ways to do it that lead to abject failure and probably also a rescinded job offer (if you've even gotten as far as a job offer in the first place). Here's what you should know before you start negotiating your salary. Oh, and don't forget that money isn't the only thing you can negotiate for or use as bargaining chips; The Billfold has some excellent tips for what else to consider, so check 'em out. After you get a job offer, that is.

Like so many interview questions, "Where do you see yourself in five years" is a tricky one; you don't want to make it seem like you're going to slack off, but you also don't want to imply you'll leave for something better the second it comes along. As Business Insider noted, the point of this question is to find out whether you're interested in a career, or just a job. Answer accordingly.