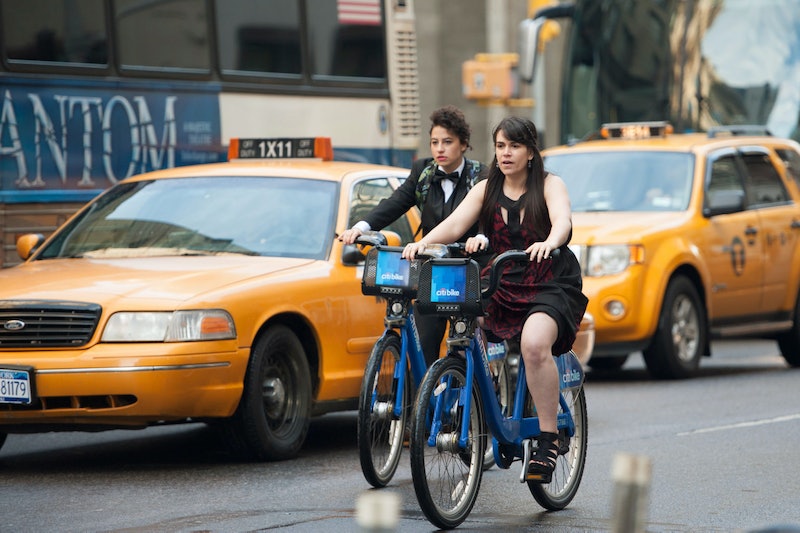 The weather outside is frightful, but Broad City is back and I'm reliving summer through Abbi and Ilana's eyes. Not only does the Comedy Central sitcom use local New York City comedy talent, but a lot of the show is filmed in real locations rather than studios, including Abbi's work place on Broad City , Soulstice Gym. On the show, Abbi is an illustrator who works as a trainer — just kidding! She's actually a cleaner. Being a trainer would be awesome. Alas, there doesn't seem to be much hope of Abbi getting a promotion any time soon when she's so valued for the gross job she has now. Her bosses, always bowing, encourage her to have a positive attitude even when they're asking her to clean up bathroom messes. It's a very specific environment, presumably for the sake of comedy.

However, the gym is pretty cool and good comedy is based in truth. We can see why Abbi, in theory, would want to work at a place like Soulstice. It's a lot quirkier and artsier than your typical gym or, say, a YMCA. Is this supposed to be like SoulCycle? Do gyms like Soulstice really exist in New York? Where do they film? You too, can visit the "non-member pen" at Soulstice (sort of), if your heart desires.

Now that you've seen a little bit of Abbi in action (not really), here's how to get to Soulstice IRL:

Broad City films Soulstice scenes at "Chalk Gyms" in Williamsburg, Brooklyn. If you already live in the area, it's right off the L train. This might explain her commute — it seems like a convenient, neighborhood gym, but Abbi lives in Queens! But logistics aside, look at those fun goals! I want to go there right now. Poking around the site, you can see how the exposed brick and open spaces make it an ideal place to film.

One important element of Chalk Gym is "keeping your body in tune" and a focus on new music. This is the current monthly playlist on their website. The trainers even have their own personal playlists. My idea of working out, for years, was to play Just Dance on my Wii. So I'm totally down with this approach to fitness. However, we definitely don't see this aspect of the gym on Broad City. For starters, I think it would get Ilana to visit Abbi at work more often. Also, can't you just see Abbi working on her trainer playlist? I bet she already has one on her iPod or cell phone that she's constantly updating and curating so that she's ready to go at a moment's notice.

While Chalk Gyms serves a the filming location, in real life, Abbi Jacobson had a job handing out flyers at Equinox Gym in exchange for a free membership. However, writing adapts to your environment, and I think it's pretty clear how both Equinox and Chalk influenced the bizarre, uber-positive place that is Soulstice Gym.