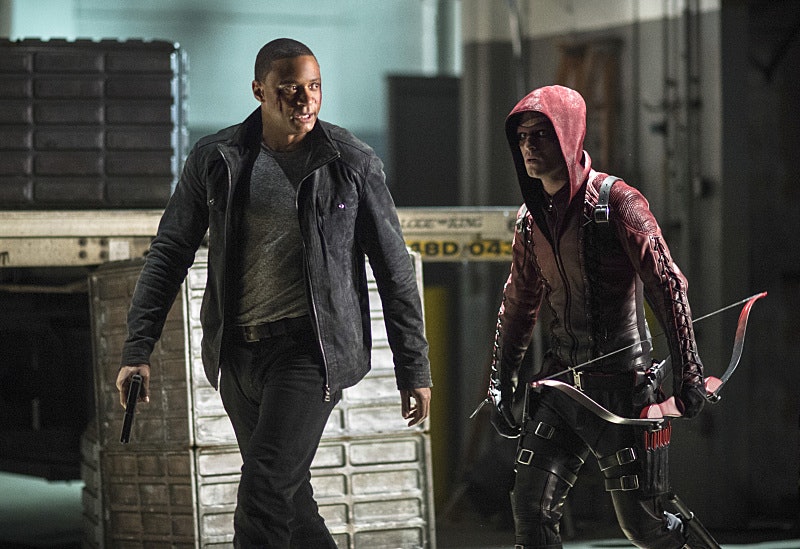 While Oliver Queen is MIA (maybe dead??) during this part of Arrow Season 3, someone's going to have to step up and take care of Starling City. It's probably not a job that anyone really wants to take, since I doubt Starling City is really on a destination list for perfect vacations, considering all the crime, mass murder, near destruction, and League of Assassins members running around. Plus, it probably doesn't even come with good dental insurance. However, someone's got to do it. So when Arrow returns, will Roy Harper, aka Arsenal, lead Team Arrow? Considering the job description, it looks like Roy doesn't want it, either.

Colton Haynes talked to Comic Book Resources about the upcoming Arrow episodes in which Oliver is still very much gone. "He's still dealing," Haynes explained of his character. "He's not sure if he's pissed off that this happened. He is very emotional when it comes to that because he lost a mentor and he lost a friend. And he really has to step up, and he isn't really ready to."

It also kind of sounds like all hell has broken loose down in the Arrow Cave, considering that as Haynes explained, without their fearless leader, "It's a vote every time [they] have to do something, so that's kind of frustrating. And at the same time, no one really listens to each other."

Considering all the bickering, it appears that it'll be more a tag team of Roy, Diggle, and Felicity who are in charge of Team Arrow now. Once again, Diggle is going to suit up as the Arrow (like he's done before in Oliver's absence) and talking to TVLine, showrunner Marc Guggenheim explained that, both Diggle and Felicity "become essentially the leaders on Team Arrow." Somehow, I don't think Roy is actually going to mind that he's not the one left in charge when Oliver gets left behind (see what I did there?).

As much as we love Roy, he's still nowhere near the same caliber as Oliver when it comes to not only fighting and taking down the bad guys, but also dealing with the emotional toll that comes with being a vigilante. He did kind of keep Thea's whereabouts a secret all summer, and royally pissed Oliver off. It's not a huge thing, but it's still a big enough thing that we know he's not completely into his vigilante alter ego just yet.

Even though it's immensely sad, the "death" of Oliver will strike Roy in a big way, as he tries to find his footing as a hooded figure once again. At least he's starting to get his emotions in check one again, as Haynes told Comic Book Resources, "...he's going back and seeing people from the past to see what he can do to manage his emotions because Roy doesn't want to make a bad decision on an emotional level, as opposed to a logical one."

And won't Oliver be so happy to see a newly reformed and now emotional Roy when he returns from his death experience?