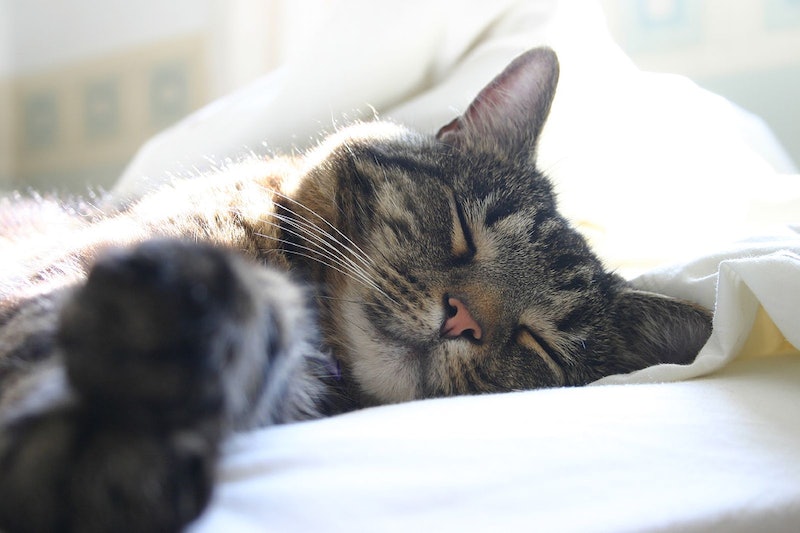 I may still be relatively young, but I'll be honest: I run on what a lot of people consider to be geriatric time. I eat dinner early and I go to bed early — but you know what? I'm not at all apologetic about it — especially the going-to-bed-early part. Yes, sometimes I go a little wild and stay up past my bedtime on weekends; by and large, though, I'm a big proponent of turning in early. Life just gets better when you go to bed early — or at least, it does for me.

Part of the reason I turn in sooner than a lot of people do is because I'm not really a good sleeper: I have a hard time falling sleep, and an even tougher time staying asleep once I get there. As a response, therefore, I've spent many years developing a system that helps make sure I'm actually snoozing by the time I need to be in order to get enough rest: Drink warm milk or herbal tea around dinnertime, get into bed at 9:30, read for an hour or so, then conk out. It's not fool-proof, but it works most of the time.

This isn't to say that early birds are better than night owls or anything; we're all just different — that's all. But for those of you who are in the "in bed before midnight" camp with me, don't ever let anyone make you feel lame for it. The advantages of an early bedtime are totally worth it.

1. You actually feel rested when you wake up in the morning.

The older I get, the more I realize that my body just can't handle staying awake until 2 a.m. and waking up at 6 or even 7 a.m. anymore. Four or five hours of shuteye doesn't cut it; I feel like hell. Better to turn in early and get enough sleep. As a bonus, long days also look less daunting when you face them well-rested, as opposed to exhausted.

2. You don't always need an alarm to wake you up.

This is a bonus that comes with being well-rested: You can wake up without an alarm. I'd set one anyway, just to be on the safe side; odds are you'll wake up before it goes off, though. It's a far pleasanter experience than feeling like you've been launched into a Star Trek red alert crisis as soon as you open your eyes.

3. You get more time snuggling under the covers at night.

Because wrapping yourself up in blankets and burrowing into your pillows is the best.

4. You get way more done in the morning and it feels awesome.

Anecdote time: I'll admit that on weekends, I'm not particularly good at waking up early (even though I know I really should be keeping my sleep hours consistent straight through the week) — but every so often, I naturally wake up ridiculously early on weekend mornings feeling proverbially bright-eyed and bushy-tailed. And you know what? I love it when it happens. Getting up, making an elaborate breakfast (I'm a big fan of weekend morning pancakes, waffles, bacon, biscuits, scones, omelettes, and so on), cleaning your entire apartment, and getting yourself showered and dressed, then discovering it's barely 10 a.m. is pretty awesome: With your to-do list already accomplished, you've got the entire rest of the day to do with as you please. Personally, it makes me feel both productive and leisurely — two things which might otherwise be at odds with each other. Best feeling ever.

5. You have a built-in excuse whenever you don't want to go out.

Or even a weekend night, for that matter. Socializing every so often is good for you, too, but if you're just not feeling it, it's totally acceptable to say, "I can't — it's past my bedtime."

6. Your ticker stays in better shape.

Numerous studies have shown that the heart benefits from the body getting enough sleep. A study conducted by researchers at the University of Chicago in 2008, for example, found that getting more sleep keeps calcium deposits in the coronary arteries down, protecting against heart attacks; furthermore, research conducted by Japan's Misao Health Center found in 2009 that men who turned in before midnight had healthier arteries than those who went to bed after midnight — regardless as to how many hours of sleep they got. I haven't seen any comparable research indicating the same phenomenon in women, but it's probably pretty safe to work off the assumption that something similar happens for ladyfolk who hit the hay before midnight, too.

7. You can secretly feel smug about it.

"Secretly" is the key word here, though. Don't be a jerk; going to bed early doesn't make you better than anyone else. It just means you're awesome at managing your time. Good for you!

8. Your skin will give you less trouble.

And so will your whole body, for that matter — it uses the time you're asleep to repair itself. Your skin in particular shows its wear and tear if you doesn't get enough rest (it's called "beauty sleep" for a reason), so if you suffer from dullness, puffy eyes, or any of a multitude of skin-related woes, try heading to bed early and upping your ZZZZZs.

9. You always remember what you did last night.

Maybe this is just me, but the idea of getting blackout drunk, high, or otherwise messed up seriously freaks me out. I can count the number of times it's happened on one hand, and even those I consider to be too many. But hey, when you go to bed early, you always know what you did the night before — which also means you never have to worry that you started dancing on the table, fell off it, broke the table, and made a lot of other drunk people incredibly angry and don't remember doing it. I'd call that a plus.

While it hasn't actually been proven that eating late at night causes weight gain, it has been fairly well documented that it correlates with things like acid reflux. Going to bed earlier will probably encourage you to eat dinner earlier, too — and maybe change your eating habits throughout the day, as well. No one likes heartburn, right?

11. You have pleasanter dreams

Or at least, you'll probably have fewer nightmares. Remember that whole thing where going to bed early will likely cut down on late-night eating? Well, the next item in the chain of results is the nightmare thing: Going to bed too soon after eating keps your metabolism working, which triggers your brain to be more active, which in turn can cause nightmares. Stop the late-night eating by turning in earlier, and voila! No more signals to the brain to stay active, and thus, no more nightmares.

12. Sometimes you get to see the sun rise.

Most of us see sunset all the time. Sunrise, though? Not so much. Try heading to bed early and waking up in time to enjoy your coffee while watching the first light of dawn peek over the horizon. It's magical.

More like this
3 Zodiac Signs Most Likely To Be The Center Of Attention
By Nina Kahn
Isa Guha Is Taking The Lead
By Charlie Mock
This Psychological Effect Might Be Keeping You From Hitting Your Goals
By Lexi Inks
How To Communicate With A Scorpio, According To An Astrologer
By Nina Kahn
Get Even More From Bustle — Sign Up For The Newsletter