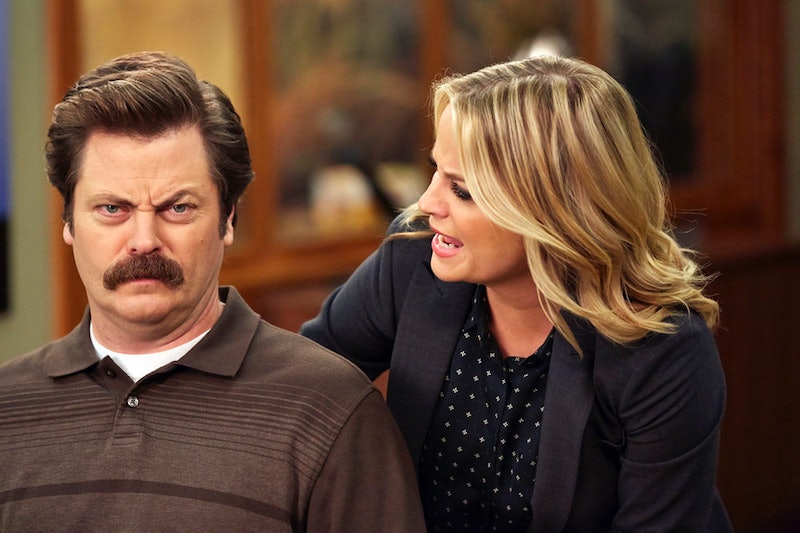 When we were finally given the first episode of Parks & Recreation Season 7, I thought I would be able to sleep easy. Well, I was wrong, because at the beginning of Season 7, I found myself within a three year feud between Ron and Leslie, the two Parks & Rec characters I thought would never stop talking. We didn't know then what the issue between the two was, just that it was called Morning Star, but on Tuesday's episode we finally learned what happened between the two. And if you ask me, the beef was well-deserved.

So what was the Morning Star incident? Well, we learned during a Ron and Leslie lock-in what really happened, and it involves Leslie's most important baby of the entire series: The Pawnee Commons. Turns out, in November 2014 — when Ron quit the Parks Department and started his own business — he didn't even tell Leslie that he was planning on doing it. Burn 1. Then, January 2015 comes around and Ron announces a building that is going to go up next to the Pawnee Commons. Burn 2. And guess what had to come down in order for Ron's building to go up... Ann Perkins' house. Burn 3. The ultimate burn.

Ron Swanson, you do not mess with a poetic noble land mermaid like Ann Perkins. You just DO NOT. That is sacred ground for the Ann and Leslie friendship... It's where Leslie got her first smokey-eye. SMOKEY. EYE. RON.

But of course, that wasn't the whole story. After Leslie left the Parks Department, April and Terry went with her, and Tom started his own businesses, Ron realized he didn't know anyone working with him anymore. Then, Leslie accidentally stood him up for lunch, and he never got to ask her for a job (IN THE FEDERAL GOVERNMENT).

OK, I know I was just mad at Ron for tearing down the Smokey-Eye Palace that is Ann Perkins' house, but watching Sad Ron say he was going to ask for a job with his friends just broke my heart. Luckily, Leslie Knope doesn't let things get sad. She and Ron remodeled the old office — with breakfast food photos and all — and brought it back to the original Parks & Rec office we love.

So is the air cleared between these two? Of course it is, especially when Ron gifted Leslie a photo of him and her — and 'Lil Sebastian — in a frame made of Ann's door. If that isn't, "Awww," then I don't know what is.