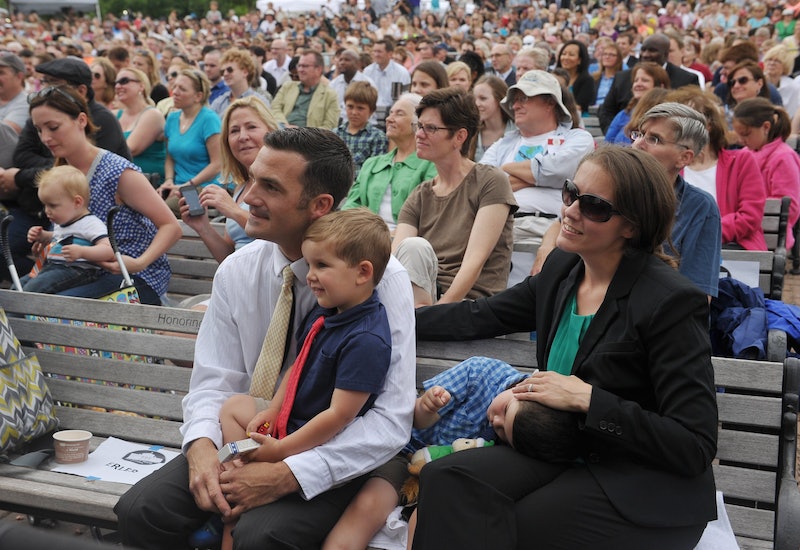 Like all State of the Union speeches before it, President Obama's sixth address will highlight a series lofty issues that have monopolized political discourse for the last several years. Chief among these issues will be the economy, and in order to bring the issues closer to home, the President and First Lady have chosen to invite ordinary Americans to share their stories, giving a face to a problem, and making the solution seem all the more tangible. This year, the honor of being Michelle Obama's guests at the State of the Union belongs to Rebekah Erler, a Minneapolis native whose story (along with her husband, Ben's) mirrors that of many Americans across the country who suffered as a result of the economic downturn. While both Ben and Rebekah were invited, only Rebekah has been spotted in the audience, begging the question — where in the world is Ben Erler?

The story of the Erlers is not one of woe and misfortune — rather, it is one that represents the perseverance of the American spirit, and the effectiveness of hard work in allowing ordinary men and women to overcome hardship in a land of opportunity. Rebekah Erler, a 36-year-old mother of two young boys, and her husband Ben were living the American dream seven years ago. The young couple owned a construction business and were expecting their first child, but shortly thereafter, the financial downturn took its toll on the small business owners. The Erlers lost their company, and both Rebekah and Ben were suddenly plagued with financial issues as they anticipated the growth of their young family.

Rather than allowing the challenges to swallow their American dream, Ben and Rebekah rallied — never too proud to turn down a job, Ben took whatever work he could find, even if it meant leaving home for extended periods of time. Rebekah, on the other hand, went back to school to re-orient her career, and left her job as a waitress to instead become an accountant. Little by little, their tireless efforts paid off. Rebekah began to pay off her student loans, and Ben managed to find his way back into the construction industry, this time in remodeling. He was no longer required to stay on the road working odd jobs to make ends meet, and as the couple gradually rebuilt their life, they had a second child, giving little Jack a younger brother named Henry. Recently, the Erlers became first-time home owners.

Rebekah Erler caught the president's attention with her story after writing a letter to the White House last March, recounting her family's struggles and subsequent recovery. "It is amazing," she wrote, "what you can bounce back from when you have to…we are a strong, tight-knit family who has made it through some very, very hard times."

And this, according to President Obama, is indicative of Americans everywhere. Said Obama in the address,

America, Rebekah and Ben's story is our story. They represent the millions who have worked hard, and scrimped, and sacrificed, and retooled. You are the reason I ran for this office. You're the people I was thinking of six years ago today, in the darkest months of the crisis, when I stood on the steps of this Capitol and promised we would rebuild our economy on a new foundation. And it's been your effort and resilience that has made it possible for our country to emerge stronger.

Even as Obama celebrates the achievements of the Erlers, he has also used their story to emphasize the fact that "too many middle-class families with two working parents are still stretched too thin," and that there is a distinct need for economic reform to ensure that hardworking individuals like Ben and Rebekah are not punished for attempting to build their dreams from scratch.

Of course, no heartwarming story would be complete without a bit of scandal, so the Twitterverse is abuzz with theories as to why Mr. Erler is not in attendance. After all, what's a good State of the Union story without a few jokes at the guests' expense? But be that as it may, the Erlers have made quite the name for themselves and for middle class Americans everywhere.