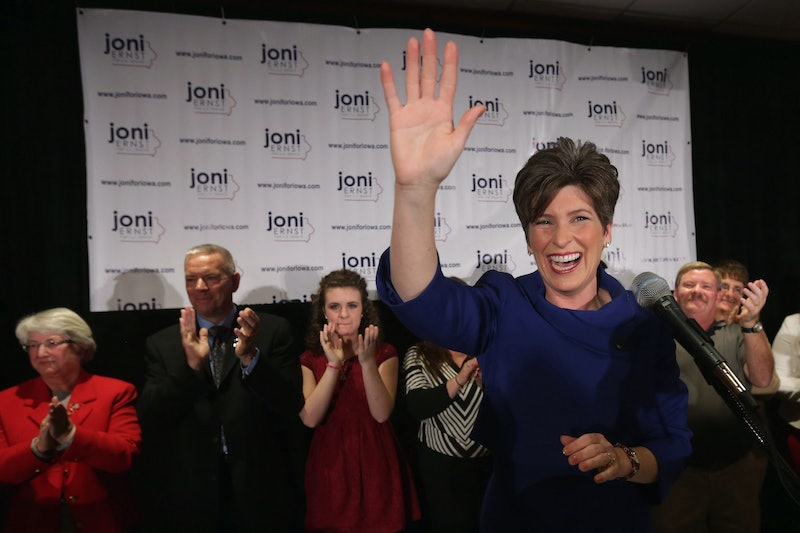 Well that's one way to make a lasting impression. After President Obama's State of the Union address on Tuesday night, the GOP's choice to provide a response to the address, Joni Ernst, took over to put forth the GOP's priorities and to criticize Obama's address. However, Ernst's speech fell completely flat as everything from her politics to her delivery in general was completely demolished by critics, most of them on Twitter as per usual. But the strangest and worst part of Ernst's speech came when she started to tell viewers unrelated and weird stories of her childhood involving working the biscuit line at Hardee's and how she learned not to waste from her mother, who would slip plastic bread bags over Ernst's shoes on rainy days to protect them. This awkward bread bag shoe moment birthed a hilarious new meme in the same vein as Jennifer Lawrence's Golden Globes dress from 2014.

Immediately after the words bread bag and shoes came out of Ernst's mouth, Twitter blew up with photos of people putting bread bags over all different kinds of shoes as if creating a weird, unstylish new fashion fad. If Ernst's mom made her wear bread bags over her one pair of good shoes, how did she secure them? With rubber bands? Double-sided tape? Neither of these ideas sounds great. But that's besides the point. The meme was born, and now it roars louder that anything that Ernst said in her State of the Union response. I'm sure this isn't the kind of attention Ernst was hoping to get in her first big speech to all of America.

Twitter users are pretty damn hilarious. And man are they good at banding together to mock people and create viral sensations.

Some people used Ernst's own comments about what kind of roles she plays in her life.

Other went back in time to find other GOP supporters who could relate to Ernst's bread bag fashion statement.

Glenn Beck, because of course. And then there were the many, many people who decided to rock the new fashion trend for the rest of the night.

I dare these people to go out in public wearing this. Has anyone tested out Ernst's routine shoe-protection out yet? And it wouldn't be a meme without a new Twitter account set up for the bread bag shoes themselves. Like Angelina Jolie's leg at the Oscars and more, this is one Twitter page to watch for the next few days.

Hmm... Shoes you can also eat. Sounds both delicious and completely disgusting. I'm so conflicted, but the meme is just so perfect.

More like this
Dan Levy Gave Loungewear New Meaning In His Hilarious IG Runway Show
By Brad Witter
5 Best Buys From The 'Euphoria'-Approved ASOS x Adidas Collab
By El Hunt and Bustle Editors
Police Shove 'Full House' Star Jodie Sweetin At An Abortion Rights Protest
By Radhika Menon
Yes, You Can Buy Off-White’s New Beauty Range In The UK
By Tomi Otekunrin
Get Even More From Bustle — Sign Up For The Newsletter