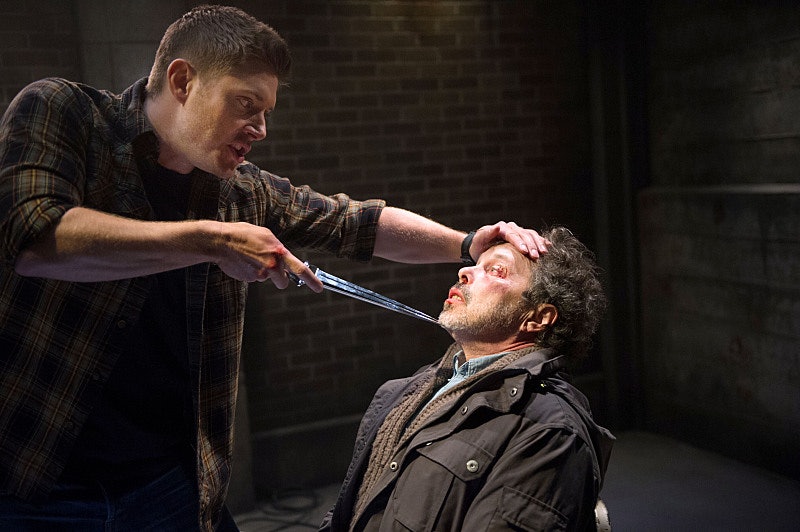 He might be one of the most evil characters to ever appear on Supernatural, but in the Season 10 midseason premiere "The Hunter Games," Metatron was released from his prison in Heaven temporarily to potentially help Team Free Will with a huge Cain-sized problem, and it was the best. Castiel got tense permission to borrow Metatron on a sort of prison work-release as he was potentially the only person who could help Dean get rid of the Mark of Cain as the mark was starting to turn into a dangerous, murderous monster. Or as Metatron would say, Dean is a "foaming at the mouth, balls out maniac." Yup, this is why I somehow find a way to sometimes love this terrible dude. But can Dean even be saved from the mark?

Now for those who know just how dangerous, manipulative, and overwhelmingly cunning character Metatron really is, it would be obvious to get outraged that Castiel, Sam and Dean would even think asking for his help would be a good idea. Honestly, have they learned nothing from Season 9? Clearly the only thing that matters most to Team Free Will right now is getting rid of the Mark of Cain from Dean's arm before he completely descends into a murder-obsessed villain to beat. But of course, despite giving the boys a possible clue into how to potentially end the mark torture, Metatron also made things worse for Dean as per usual.

At first, it seemed that despite his snarky comments, Metatron was actually going to help Team Free Will on their mark-erasing quest. His exact words were "I would be tickled to pop this biblical zit," so clearly he seemed to be on board with assisting the Winchester boys. Metatron explained that the most important thing the boys needed to do was to bring back the First Blade and reunite it with its owner.

Obviously Sam was not comfortable with this plan as it required Dean to be near the one thing that would make him even worse and even more violent than he already was. But Dean tentatively agreed to the idea as he was just about ready to do anything to prevent becoming a monster. But Metatron didn't fully explain why the First Blade had to come back into the equation which reminded me of another character.

But the boys went to Crowley anyway who was able to retrieve the blade (despite some complications with his mother). When reporting back to Metatron about their success and the need to get the rest of the steps for getting rid of Dean's infamous mark, Metatron refused to help. And to make matters worse, he taunted Dean about his growing rage. "Good Dean, go darker, go deeper," he said as Dean beat him over and over again. When Dean finally started torturing him, Metatron explained that the more Dean gave in to his violent desires, the deeper he would fall into the mark's spell. Imagine if he actually destroyed a Scribe of God?

But Dean wouldn't give up and finally, as he was just about to kill Metatron, Castiel came through in a big way to save the day. He blasted the doors of the dungeon open and grabbed Metatron to bring him back to prison. Before his departure and before Dean almost killed him Metatron uttered these cryptic words: "The river shall end at the source!" One smart Supernatural pointed out that the original mark of Cain was given by Lucifer. Could there be a chance that we see Lucifer again if Dean's mark problems get worse?

Things with Dean certainly aren't getting any better, and that's going to make for a tense and dark rest of Season 10. But considering the way Dean and Metatron left things, I feel like it's also possible we haven't seen the last of the evil scribe of God this season. In fact, if things do get progressively worse for Dean, I blame Metatron for making the boys bring back the First Blade. I don't know if Dean can be saved from the mark, maybe he'll just have to learn to manage it. But I can say that this mark storyline has me pumped to see the return of Cain himself. If anyone can help Dean with his murderous desires, it's the guy who had them first, not Metatron. But I have a strong feeling we're going to see more of Dean's descent before things start to get any better.